‘Bad Education’ is the Allegory We Need Right Now 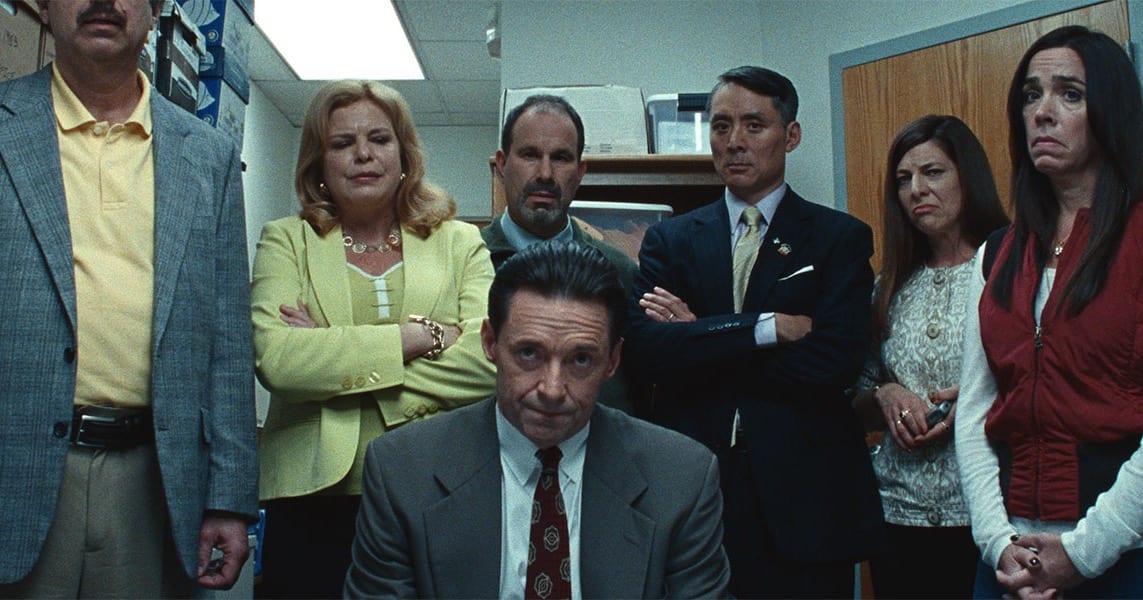 High school reporter Rachel Bhargava (Geraldine Viswanathan) is photocopying financial records from her district’s archives when she notices water dripping from the ceiling. She’s working on a story about a skywalk her superintendent, Doctor Frank Tassone (Hugh Jackman), is commissioning for her building. Roslyn Schools may rank fourth on Long Island, but Doctor Tassone insists he still needs the budget to pass for this vanity project because, according to him, it will take them to first. Mind you, it’s not so he can patch up the roof over his students’ heads — it’s so he can line his own pockets with their parents’ tax dollars. Meanwhile, his accomplice, assistant superintendent Pam Gluckin (Allison Janney), believes they’re good people who know what’s best to help the kids.

The latest release from HBO Films, Bad Education is based on the true story of the largest public school embezzlement in United States history. Nothing in film is accidental, and this comedy-drama happened the way it did, when it did, for a reason. Set in 2002 New York, it is no less relevant right here and right now. Journalism that isn’t taken seriously, government officials who exploit the working class, and out-of-touch one-percenters like school board president Bob Spicer (Ray Romano)…

A Sociopolitical Analysis of Bad Education

For context, the Bush Administration of the early 2000s, when the Roslyn Schools scandal took place, oversaw an era of corruption of its very own. More specifically, human rights abuses and war crimes abounded on an international scale throughout the Global War on Terror. Indeed, Bad Education juxtaposes itself adjacent to the aftermath of the September 11 attacks, which was the catalyst for this systemic immorality.

In a burst of movie magic, Bad Education came out during the crisis of our generation. If George W. Bush was John the Baptist to Donald Trump’s Jesus Christ, then the coronavirus pandemic is to us what 9/11 is to Bad Education. With the government using this emergency to expand its authoritarianism, the film predicts how our executives will see tragedy as an opportunity to widen the equality gap between ourselves and them. To be sure, Rachel lives at home with an unemployed father while her superintendent skims off the top of the skywalk budget, and Bob makes seven figures a year even though Doctor Tassone and Pam struggle to get by. At the end of the day, far-right politics are about the powerful carrot-and-sticking resources out of the powerless by promising them pursuits of happiness through extravagances like the skywalk, while picking their pockets after their backs are turned.

However, in our democracy, we are also entitled to freedom of the press, and as grim as the state of affairs is in Bad Education, the media saves the day as it has done so many times throughout our history. The truth is the ultimate enemy of an immoral system, for it empowers the people to cast down their oppressors. Rachel’s very editor-in-chief, Nick Fleischman (Alex Wolff), tells her not to take her job so seriously because Doctor Tassone himself is writing his letter of recommendation for college. Big corporate journalism has similarly sold out to the same leaders who call the facts “fake news” every time they come close to exposing them. But despite all these roadblocks Rachel faces, she still gives hope to the other small-time writers out there who only want to do the right thing.

A Cinematic Analysis of Bad Education

And it is due to its filmic technique that Bad Education achieves this social commentary. Dramatically, Jackson and Janney deliver tours-de-force. Jackman is unrecognizable as Doctor Tassone but just as intense. As for Janney, she runs the risk of parodying Long Islanders with her accent, but, instead, develops Pam into a nuanced, sympathetic matriarch who is motivated by nothing more than to provide for her family the same slice of the American Dream as Bob Spicer has. Together, these two stars draw the audience through the bleakness like lighthouses in the dark.

Of course, the competence of their acting speaks to Finley’s directing. This filmmaker, like all great filmmakers (and bosses in general), is a master delegator. He plays to the strengths of his creative partners, and their collaboration then becomes a whole greater than the sum of its parts.

As a readily available example, Louise Ford’s editing springs to mind. Her cuts generate controlled tonal shifts as well as conflicts that tease out the comedy in Jackson and Janney’s performances. Comedy is the most difficult genre to get right, and it’s even more difficult to balance it against drama without throwing off the comedic timing, but Ford and Finley do so deftly.

As ever, it is largely script dependent. Like any ethical writer should do (and like the Golden Age of Classical Hollywood used to regulate them to do), Mike Makowsky’s cast of characters get what they deserve at the end of his screenplay. He does not sensationalize, nor does he moralize, striking as adept a balance as do his collaborators.

Movie magic is nothing short of divine intervention, and Bad Education is a stroke of happy coincidences. As old-fashioned filmmaking at its finest ought to do, it transports us to a world so much like ours, the meaning behind its subtext is rich with urgency. In these trying times, we turn to home viewing much like our ancestors turned to the movie theater in the Great Depression and World War II, and Bad Education, which first premiered at the Toronto International Film Festival before anyone even heard of COVID-19, will go down as an accidental (but welcome) document of this moment, too.

Thank you for reading! What are your thoughts on Bad Education? Comment down below!

[…] State both is and isn’t a microcosm of modern American politics. In the race for votes, we see the focus on soundbites, the […]

[…] Many eleven-year-olds suffer difficult changes, but few are afforded a comfortable place to live, a good education, and a loving family. Riley has all the benefits that being a part of a wealthy family affords her, […]

Love Hugh Jackman in whatever he does.

‘Uncut Gems’ Exit Survey: This is How Sandler...