How ‘Rebecca’ Set the Table for Hitchcock’s Hollywood Masterpieces 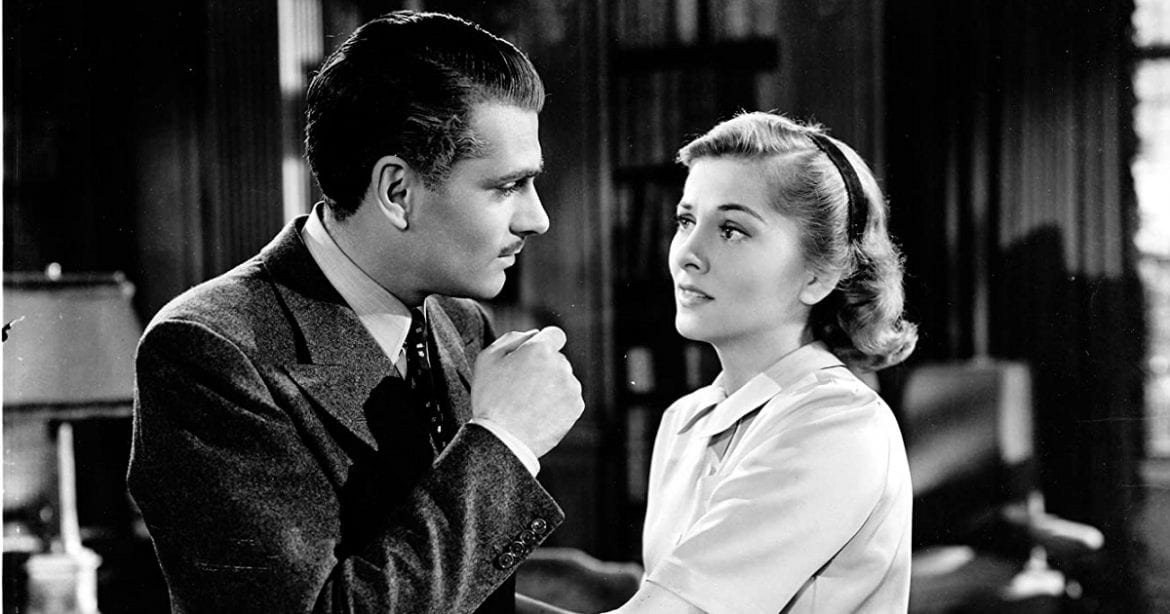 Without Sir Alfred Hitchcock’s Rebecca (1940), the world never would have experienced some of the greatest films ever made. Released the year after Victor Fleming’s Gone with the Wind (1939), this Selznick International Pictures-produced romantic psychological thriller had some big shoes to fill. For this artist from across the Atlantic to secure a future in Hollywood, he needed to reconcile his background in European history and culture with the popular showmanship for which David O. Selznick was famous. Indeed, it is thanks to this adaptation of the 1938 novel of the same name by Dame Daphne du Maurier that auteur theory as we know it today first found its feet with the Master of Suspense.

To be sure, Hitch would go on to return to the filmmaking techniques behind his first American masterpiece throughout his Hollywood career as obsessively as Mrs. Danvers (Dame Judith Anderson) visits and revisits the first Mrs. de Winter’s room.

A Genre Analysis of Rebecca

Naturally, one would expect any of the Master’s movies to be suspenseful, and Rebecca delivers. Narratively, suspense is generated once the audience knows something the protagonist does not. Because the viewer is manipulated toward fearing Mrs. Danvers from the moment George Barnes’s cinematography first closes in on the dark color palette contrasting against her pale complexion, we know the second Mrs. de Winter (Joan Fontaine) is naïve for trusting her. When she advises the unnamed main character on what to wear to the costume party, we can dread viscerally that it is an act of sabotage. As editor W. Donn Hayes cuts the closeups of Mrs. de Winter descending the staircase in Rebecca’s gown between shots of Maxim’s (Sir Laurence Olivier) back in a near-Soviet montage predating the shower scene in Psycho (1960), we wait for him to turn around and blow up at her.

Not only that, but Hitchcock is also known for exploiting our childhood traumas. Like Mrs. de Winter and the china Cupid, we have all broken something and hidden the evidence from an adult costumed and hair-styled as sternly as Mrs. Danvers (and we have all faced the humiliation of admitting to it after the fact). In that same vein, Mrs. de Winter entering Rebecca’s bedroom is “forbidden” enough to make you wonder if she’ll find the dead woman in there. Similarly, in Rear Window (1954), when the voyeuristic everyman James Stewart gets caught spying on his neighbors, it draws a gasp every time, even after multiple viewings, because “naughtiness” is such a universal human truth.

Above all, though, Rebecca is a romance, and Hitchcock is a romantic (albeit Gothic) director. His masterwork, Vertigo (1958), is a love story. But the difference between his romanticism and that of his more melodramatic contemporaries is his critical eye. Do virtual strangers Maxim and Mrs. de Winter marry because they’re in love, or out of a neurotic mutual obsession?

Speaking of Vertigo (as well as Psycho, for that matter), Rebecca takes a look at the crosstalk between the past and the present through the lens of the relationship between the living and the dead. Vertigo (and, more implicitly, Psycho) take this dynamic to its logical, necrophiliac conclusion. While Rebecca is named after a dead character and Mrs. de Winter is not named at all, Maxim and Mrs. Danvers reject the glimpses of Rebecca they see reflected at them from Mrs. de Winter, instead of embracing them, because only in death can they consummate their fixations on Rebecca. In a way, it is a ghost story, as full of German Expressionistic shadows and Freudian memories as the San Francisco in Vertigo and the Bates Motel in Psycho. These titles are so timelessly watchable, so cinematically powerful, because love and loss await us all, and one can be as painful as the other.

In addition to San Francisco, the Bates Motel, and the various set-pieces in North by Northwest (1959), the setting is as much a character in Rebecca as the cast of players. Under Hitchcock’s creative genius and Selznick’s generous production value, the art and set decorators build a Manderley which externalizes the psychology around Rebecca de Winter like only movie magic can. It is not so much a home as it is a mausoleum, preserving a person who is more fantasy than she is reality, which is the tragedy and futility of our mortality.

And du Maurier’s source material inspires Hitchcock’s signature style. After all, the Sun rose and set on her — Rebecca was his first American classic, and The Birds (1963), based on one of her short stories, was his last. Singing a muse’s song in his ear, sexuality and violence need not be mutually exclusive across du Maurier’s writing.

How these two artists mined such thematic double entendre from the subtext of their works, to fly below the radar of the puritanical decency standards of their time, is an artistic miracle in and of itself.

As a filmmaker, Hitchcock did more with less. According to the strict moral guidelines governing the industry in his day, he was at his best. His limitations forced him to be less exploitative and more artisanal. Even though Gone with the Wind is more a “Selznick” picture than it is a “Fleming” picture, Rebecca is a “Hitchcock” picture because it still preoccupies itself with the clean-cut Maxim’s humanizing guilt at the same time as it declines to explicitly depict his sin. He is a traditionally immaculate leading man who just so happens to be a murderer, and since casting him down calls out the hypocrisy of the studio system restricting Hitchcock’s morbidity and perversion, Rebecca is the Master at his most subversive.

Knowing his limits likewise helped him empower his crew to reach the fullest potential of their respective talents. If cinema is a collaborative medium, then Hitchcock was a born cinematic leader. Unlike, say, M. Night Shyamalan, Hitch knew not to write and star in his texts. He delegated writing and acting to better writers and actors than himself.

Which is to the benefit of the performances in Rebecca.

Olivier is to acting what Hitchcock is to directing, a classically trained stage performer who gilds the celluloid on which he appears. Hitch’s laissez-faire approach to his actors enables Olivier to develop Maxim de Winter into an attractive (yet intimidating) male lead. He sweeps us off our feet right alongside Mrs. de Winter, while simultaneously frightening us to the edge of our seats over what he’ll do next.

As for Fontaine (whose sister, coincidentally enough, starred in Gone with the Wind with Olivier’s wife), she paved the way for the ultimate Hitchcock blonde, Grace Kelly, in Rear Window, Dial M for Murder (1954), and To Catch a Thief (1955). For a woman with no name, she is as commanding a hero as Teresa Wright in Shadow of a Doubt (1943), or Vera Miles in Psycho. Her voiceover at the beginning establishes her as the “narrator,” and she carries Olivier, Anderson, Hitchcock, Selznick, and Manderley alike on her shoulders.

Unfortunately for this film about pretty lies concealing ugly truths, Rebecca is an imperfect release. Caressing Rebecca’s clothes against her cheek implies that Mrs. Danvers is a lesbian, and a negatively represented one at that, as she whispers in Mrs. de Winter’s ear to jump to her death. Along with Rope (1948), Strangers on a Train (1950), and Psycho, Hitchcock is very much of his time when it comes to queer-coded characters being homicidal psychopaths.

Then again, there is no such thing as “the perfect film,” and Rebecca comes closer than many. It is an artifact from the bygone Golden Age of Classical Hollywood when people turned to the theater during the Great Depression and World War II. Mystery and suspense thrillers may have typecast Hitchcock, but, by becoming the greatest of his genre, he became the greatest of his art form, and among the greatest of any art form in the Western world.

Thank you for reading! What are your thoughts on Rebecca? Comment down below!

[…] Rebecca is an upcoming British romantic drama film scheduled to be released worldwide on October 21st by Netflix. The film is directed by Ben Wheatley and stars the likes of Lily James, Armie Hammer, Kristin Scott Thomas, Tom Goodman-Hill, Keeley Hawes, Sam Riley, and Ann Dowd. The film is based on the 1938 gothic novel of the same name by Daphne du Maurier and was first released as a movie two years later when Alfred Hitchcock adapted it in 1940. […]

[…] month, Alfred Hitchcock‘s Psycho celebrates 60 years since its release. You already know its legacy; it’s one […]

I had actually planned on watching the film tonight and then I came across this post. Will surely watch it now.

Rebecca is such a fabulous film, one of of my all time favourites. Such a pity the special effects are so poor. .

‘A Walk to Remember’ Will Make You Cry...