‘The Last Days Of American Crime’ Is a Joyless Ordeal

In a (slightly more) dystopian near-future, The USA is preparing to turn on the ‘American Peace Initiative’, a signal that acts as “a synaptic dampener making it impossible for a person to carry out an act they know to be unlawful.”

Against this backdrop, a gangster’s son Kevin (Michael Pitt) has a plan to steal a billion dollars in cash from a facility close to the Canadian border in the unsettled moments following the signal switch on. He and his girlfriend Shelby (Anna Brewster) recruit Graham Bricke (Edgar Ramirez) to help their heist, but Bricke has other problems, as he’s being chased by a crime syndicate that….actually, you know what? Trying to explain the plot is a fool’s errand here, because it’s utter nonsense. The Last Days Of American Crime is based on a comic book, and I don’t know or care who the writers of it are, but I can only assume they were 12-year-olds with no adult supervision over their movie and TV intakes.

Let’s take the recruitment of Bricke by Shelby. Does she approach him with a plan since he’s a known criminal, and so is Pitt’s character? No, she seduces him in a dive bar by walking up to him, taking the ice from his drink, and sucking it. If, in real life, you respond to that by following that person to the bathroom, the best-case scenario is that, when you wake up, only one of your kidneys has been removed. Not the thoroughly unhygienic-looking sex to a workmanlike cover of “I Wanna Be Your Dog” that happens in The Last Days of American Crime.

“When You Want To Root For The Bad Guy”

That’s the tagline on the Netflix page for the movie. Unfortunately, the makers have hopelessly misunderstood the concept of “anti-hero”. Someone like Michael Corleone or Deadpool carries out villainous acts but in the service of the greater good (or at least acts they can justify to themselves). Here, almost every character is reprehensible in ways the makers clearly think is edgy and cool.

Bricke’s opening monologue is a description of how he went to seven gas stations before finding one that sold diesel. Why did he want diesel? “Because it burns slower,” he explains to a bloodied, bound, diesel-soaked guy that he then leaves with a lit cigar to burn him to death. Leaving aside that diesel doesn’t work like that, the makers think that this is a guy you want to root for. Like the similarly excretable Polar, The Last Days Of American Crime only wants to show a lot of murders and the occasional gratuitous naked woman. At least Polar had Mads Mikkelsen trying. Here, Ramirez emotes like a two-by-four with a beard drawn on it. 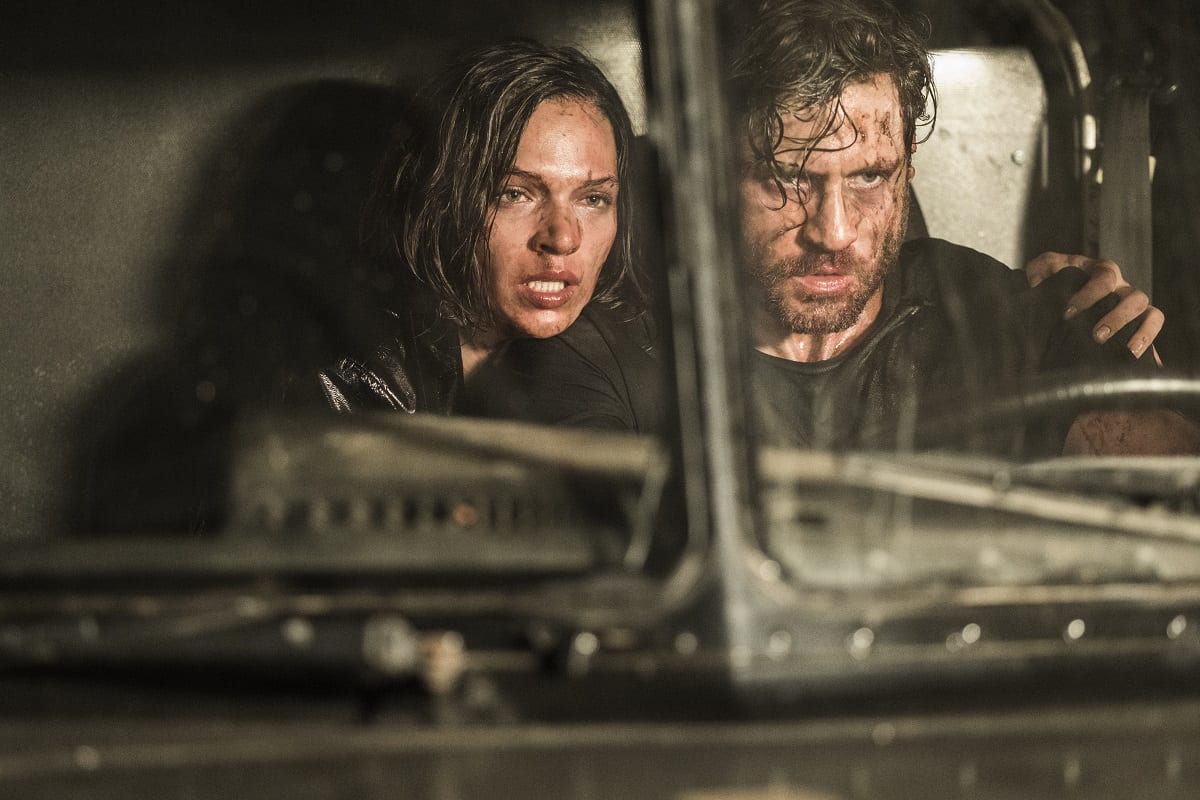 Michael Pitt does at least seem to be having fun, but even his constant yelling is a little wearing. The rest of the cast is full of identikit grizzled gangsters whose performances are aiming for True Romance but don’t even reach Boondock Saints levels. And they’re all so grimy and sweaty. The movie left me wanting to take a shower. None of these people are anyone you want to be near or spend time watching.

Sharlto Copley is the closest to a ‘regular’ character and it’s telling that his ‘good’ cop doesn’t even get a name. Oh, and he’s introduced in a scene where he blows a guy’s head off, so heavy quotation marks around ‘good’.

Shockingly, this movie from Olivier Megaton, the director of the Taken sequels and Transporter 3, has a somewhat misogynistic slant. On top of the aforementioned sex scene, Anna Brewster (not the sole female character, but the only one with more than three lines of dialogue) enters the film as a sex object, then gets to play that or a victim for the rest of the film. When, later on, they decide that she and Ramirez are love interests, it comes from nowhere as they have barely interacted in the preceding two and a half hours.

Yes, The Last Days of American Crime is two and a half hours long.  That is a hell of a long time to watch one-dimensional characters yell “motherfucker” at each other. Which is the role of 80% of the cast. You may find yourself having to think hard to remember which particular sweaty guy with a scruffy beard is the one the screen. Some of them wander off for thirty-minute stretches, then return to shoot someone or get shot to death. Mainly shot to death. The movie spends a lot on blood packs and squibs. That partially explains the running time at least. I’m still not sure an audience wants ten minutes of slow-motion flying blood, sweat, and spit. Maybe someone does, I’m not here to kink-shame, but it’s not for me, thanks.

A concept as high as a “magic off switch for crime” could certainly be used entertainingly. The Last Days Of American Crime has no interest in exploring that; it’s too focused on delivering rote violence and gunfights that are no fun for anyone. It’s yet another film for the Netflix dud file, I’m afraid.

Thank you for reading! What are your thoughts on The Last Days of American Crime? Comment down below!

[…] *To read the site’s review of The Last Days of American Crime, please click here. […]