‘The Pool’ Goes Off the Deep End 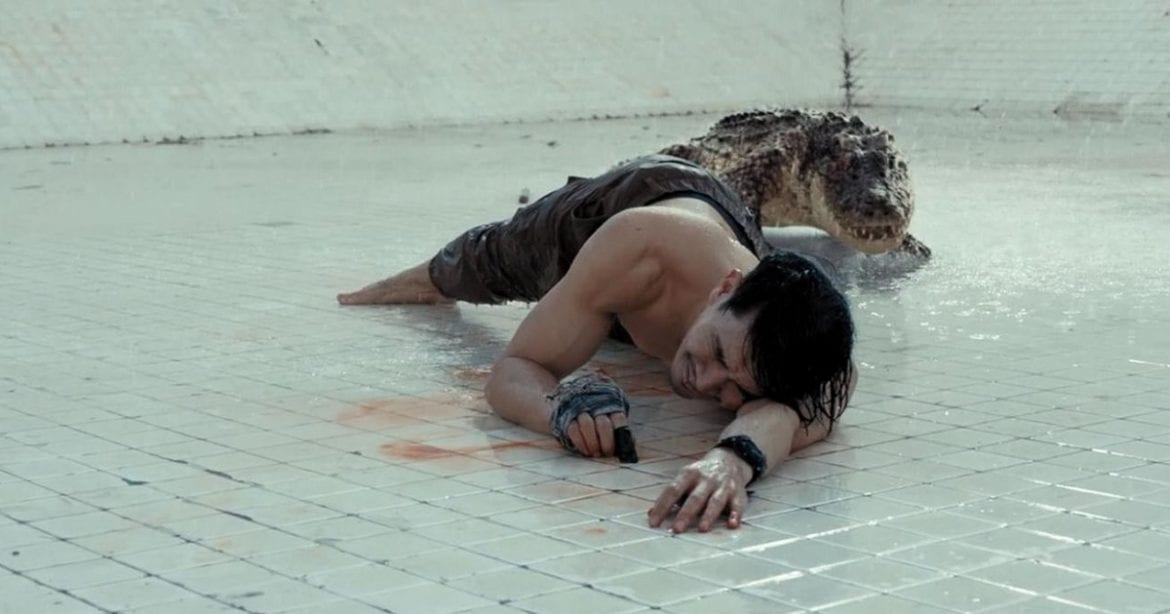 Clearing up after a film shoot, Day (Theeradej Wongpuapan) takes a break to float in a 6-meter deep pool on an inflatable. Unfortunately, it’s a slowly draining pool and after a little nap, he wakes to find he’s alone (except for his dog Lucky) and too far down to climb out. And, unfortunately, Lucky is leashed to a rail so he’s unable to perform any Lassie-esque errands.

What looks like a 127 Hours setup in The Pool accelerates in far stranger ways as writer/director Ping Lumpraloeng adds Day’s pregnant girlfriend Koi (Ratnamon Ratchiratham) to the mix. Oh, and a crocodile. Now you’re interested in Shudder’s new addition, aren’t you?

Now, don’t get me wrong. At times, The Pool is laugh-out-loud crazy. But Day still manages to be a strong, relatable character. Any stupid mistakes he makes are at the level that every person on Earth has done at some point. You’ve almost certainly got a scar somewhere that’s the result of what seemed like a good idea at the time. Even as you may sometimes be thinking, “Buddy, that’s not going to end well”, from the viewpoint of people whose whole world has shrunk to the confines of an empty pool, anything has to be worth a try.

And Day has the strongest of all reasons to keep trying. The early scenes show he is a reluctant father to be. Not because he doesn’t love Koi, but because he doesn’t think he can live up to what she and prospective junior need and deserve. The events of The Pool don’t necessarily light a literal fire under his ass, but a crocodile’s jaws are just as strong of a motivation.

A Battle Of Wills (And Wits)

The croc effects are good enough to carry what is an unlikely level of reptile intelligence and emotional responses from the handbag/shoes/razor teeth combo. She (which is also a plot point) is somewhere just below Jurassic Park‘s velociraptors in the “clever girl” stakes and takes things personally at a level just below the shark in Jaws: The Revenge. (Don’t worry, it’s a hell of a lot better than that Michael Caine house funder.) I’m not sure crocodiles are quite as calculating as Ms. Bitey is in The Pool, but it does keep things very entertaining.

Lumpraloeng has clearly spent time on the layout of the titular location. Day is repeatedly foiled by something being just too far, too high, or too heavy to help, and they all get a setup to explain why that’s so. The pool and the small amount of crawl space underneath are mapped out clearly for the audience. He never has to fall back on “idiot in a horror movie” foolishness to maintain the peril. Day always tries things that make some kind of sense. Fair warning, that includes a level of pragmatism regarding Lucky the dog that a Western movie would never dare use in a million years.

For all that makes The Pool is a high concept piece, it isn’t a serial-eater beastie movie like Crawl (as fun as that was). Ms. Bitey is a realistic size, there’s only one of her and being on land, at least she isn’t doing any high speed “death from below” chomping deaths. But by trapping Day and Koi, they were already in a world of trouble. The crocodile is merely the leathery icing on the cake. This gives the film a more contemplative feel (I mean, it’s still also a creature feature, it’s not Bergman) and the characters get to stop and think. That doesn’t make anything drag, it’s a very economical 90 minutes.

Wongpuapan plays Day with enough seriousness to offset the sometimes Wile E Coyote-esque scrapes he gets into. Between the falls, jams, crushes, and bites, he’s really made to work to survive. His gritty approach helps sell things that otherwise might be a bit too crazy to work. It means the director is free to ride all the other aspects right up to the crazy line.

The Bonuses Of The Modern World

It’s nice that, nowadays, this sort of film can find its way to horror fans. It’s very different in many ways from western horror, and would have been a tricky sell for rental stores back in ye olden times. You could invoke Crawl Or The Shallows, but outside of the setup, they are very different beasts. (Pun only sort of intended). Shudder has picked up a winner here.

Thank you for reading! What are your thoughts on The Pool? Comment down below!