‘Palm Springs’ is Refreshing from Start to… Right Before the Finish 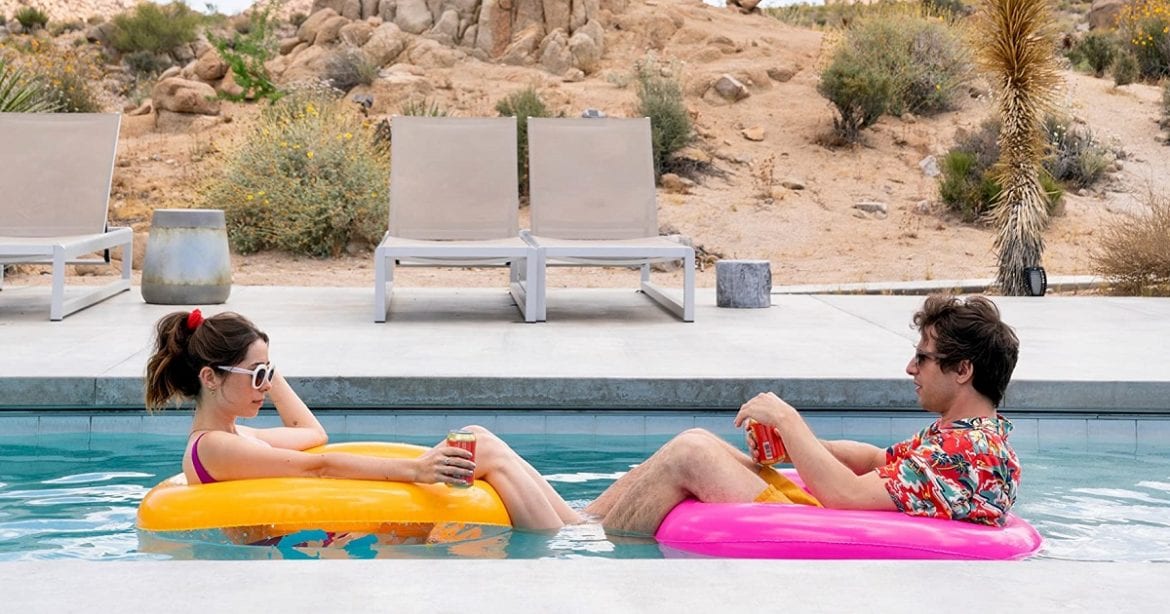 Initially, the concept of Palm Springs is easy to grasp. Boy meets the girl. Boy and girl hook up. From this point on, however, it becomes a bit of a whirlwind. Partly produced by The Lonely Island trio, who you might know from member Andy Samberg facing projects, like Popstar: Stop Never Stopping, Palm Springs brings more hilarious comedy.

Not Another Time Loop Film

Very self-aware and self-proclaiming to be it‘s “one of those infinite time loop situations you might have heard about.“,  Palm Springs strives to do a little more with the conceit Groundhog Day essentially mastered back in 1993.

Usually, some kind of selfless sacrifice can solve a time loop. Other times, you have to solve your murder; find out who wanted you gone before you get to progress to the next day. Palm Springs enjoys this concept, but also wants to keep it fresh. Therefore, it likes to put audiences experienced with this concept on the wrong foot. Any suggestions to solutions used previously, the writers shut down pretty quickly. Palm Springs wants to be nothing like other time loop films. And in many ways, it succeeds.

Andy Samberg opens the film as the seemingly depressed Nyles, who is extremely unhappy to be in Palm Springs for a wedding with his girlfriend, the maid of honor. It’s hard to figure out Nyles at first, he mainly seems like a bit of a drag. He doesn’t dress up for the wedding, drinks beer during the ceremony, and generally doesn’t seem too bothered to make an effort. Then, we soon find out he is already been stuck in this time loop for a while. And not just awhile, but an unfathomably long time, which I found very refreshing considering many time loop films start at the beginning, but Palm Springs starting in the middle gave the movie plenty of room to have fun, skipping all the elements we’ve grown accustomed to with this kind of story.

Palm Springs Could Not Have Had a More Lovable Cast

Lovable as always, Samberg in the lead is fun and endearing; I am pretty much sold on any joke that comes from him. His character is seeping with nihilism, which infects every one of his actions. We also get the joy of J.K. Simmons in a supporting role as a kind of villain/victim, stuck inside the same time loop due to Samberg’s stupidity. There is nothing I love more than seeing J.K. Simmons appear here and there and create some havoc. Simmons’ character Roy is not too excited to be stuck in this time loop, so he finds many different ways to make Nyles suffer for his blunder, like hunting him with a crossbow. (You know, regular stuff.) After all, he has many chances to do it.

However, the real star is Cristin Milioti. Even though she joined the How I Met Your Mother cast in its non-negotiable worst season, to me, she was the best thing about that painful conclusion. It was exactly then she made it onto my girl crush list. Cristin seems to influence everything she does in the best way. You might also remember her from the Black Mirror episode, USS Callister, and a bunch of other stuff (she’s one to watch!).

Cristin has been working for a while and has done a lot of great work, Regardless, Palm Springs reminded me yet again what Cristin brings to her roles. She is always adorable, but also flawed enough to not feel like an unrealistic presence and become the patented female companion trope. She has a mean streak in moments but always brings a sweetness to it.

Another Rom-com with a Typical Rom-com Final Act

Regardless of Palm Springs using that time loop concept, it is used very strongly and creatively (well, as original as we can get with it at this point). The film is entertaining in the usual Lonely Island fashion. However, Palm Springs does disappoint a little as the heightened comedy and silliness turn into seriousness towards the end. The film starts with a fairly casual and mindful approach to its narrative. Unfortunately, it still falls trap to the usual rom-com tropes in the final act. I don’t doubt this was a purposeful choice, but this means the film reverses from its fresh perception to something we have all seen many times before.

It’s not catastrophic and I definitely couldn’t pinpoint a moment where I stopped enjoying the film; it’s still a shame the film couldn’t hold up its originality it presented so well in the first two acts.

I do wonder why the film went down a more well-traveled route in act three, still overall, I applaud Palm Springs for its originality when using an often-used trope.

Thank you for reading! What are your thoughts on Palm Springs? Comment down below!

‘Superintelligence’ Does the Bare Minimum at Every Turn