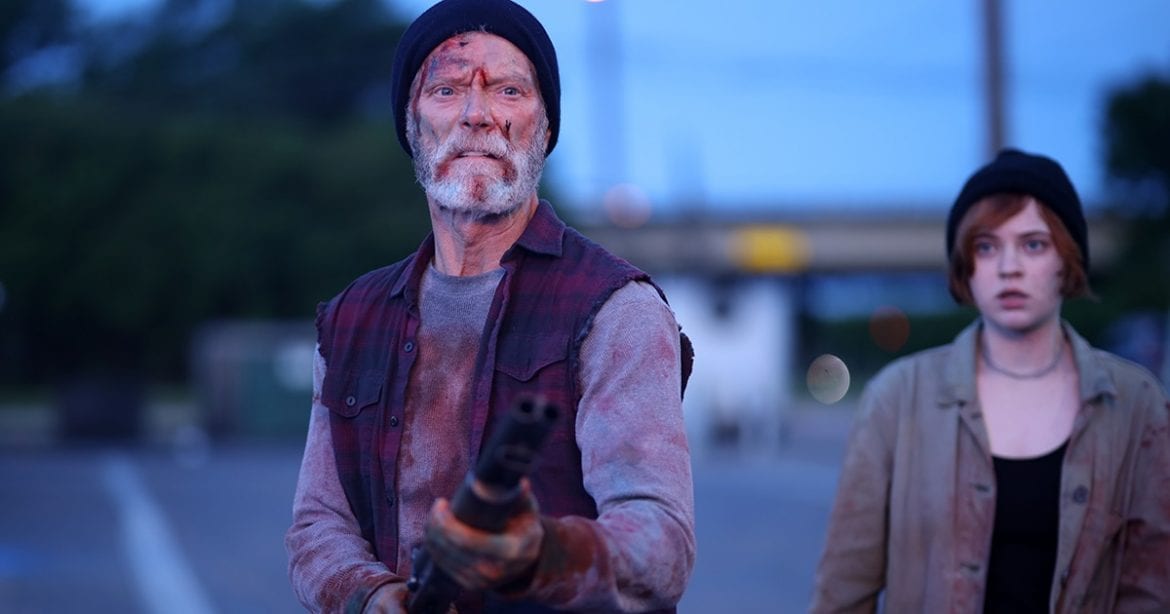 It might sound ridiculous to some, but so be it: VFW was one of my most anticipated films of the year. It started with the premise: a siege-style thriller with a group of aging veterans against a group of drug-addled punks. The cast of genre legends sealed the deal: Stephen Lang, William Sadler, Fred Williamson, Martin Kove, George Wendt, and David Patrick Kelly. The trailer featured neon-laced cinematography and promised gore-fueled mayhem — the last shot was of a grimacing William Sadler wielding a chainsaw. I had found another calling in film: I had to see VFW. I wanted nothing more in life than for this film to be as awesome as I hoped it would be.

It wasn’t easy convincing my loved ones to see this film with me. None had even heard of Fred Williamson. I just needed to share my enjoyment. The synth soundtrack pumped me up. There was soon a glorious exploding head. It was indeed the film I had hoped for.  Yeah, my loved ones didn’t care for it as much as I did. But by then, I had too much fun to care.

VFW basks in retro glory. It’s an insane survival thriller. A gloriously fun ode to a bygone era. It’s silly yet heartfelt. You are meant to cheer when the bad guys get it and to shed a manly tear when some of the veterans don’t make it through to the end.

It’s a must-see for John Carpenter fans. A must-see for George A. Romero fans. A film destined for cult glory.

As far as I noticed, a time isn’t established in VFW. It doesn’t feel like the current era. It seems to take place in a dystopian era of eighties cinema, a la Escape from New York, or any film inspired by the maddening crime wave of New York in the seventies.

A new drug called Hyper is warping the minds of this world’s troubled generation. Those who become addicted to it resemble the living-dead, as they become mindless slaves to its chemical highs. When a hoodlum named Lizard (Sierra McCormick) witnesses the deadly effects of the drug, she wants to take revenge against its local purveyor, Boz (Travis Hammer) and does so by stealing his latest shipment. While being chased by some of Boz’s gang members, she seeks refuge in a local VFW post, run by a Vietnam vet by the name of Fred (Stephen Lang).

Just as Lizard arrived, Fred was celebrating his birthday with his former platoon and Shawn (Tom Williamson), a young soldier who just came in for a drink. Fred quickly comes to the rescue of Lizard, blowing one of the thug’s head clean off with a shotgun — it’s one glorious head explosion!

The standoff commences, a punk gang-leader and his horde of homicidal drug addicts and a group of elderly yet experienced veterans. These old men are hellbent on doing the right thing. This will most likely be their last stand, but they won’t go down without a fight!

The cast is a dream come true for genre-film lovers. I had an affinity for nearly every one of its actors. Stephen Lang was endlessly quoted by me in my youth after watching The Hard Way. Sadler had made an appearance in countless unforgettable films, but I’ll most likely remember him from his acting contributions to the Tales from the Crypt franchise. Fred Williamson is a blaxploitation God. Martin Kove will always be the psychotic sensei of the Cobra Kai Karate Dojo. David Patrick Kelly will be remembered as the one calling out for the “warriors” and his deliciously outlandish turn in Twin Peaks. And it goes without saying where I know George Wendt.

Lang leads the cast and receives a particular moving monologue. Lang’s respect for veterans might have made the material attractive to him. He has a particular fondness for veterans, as seen by his beautiful one-man play, Beyond Glory.

Sadler gets plenty of chances to chew scenery throughout the film. Martin Kove’s turn as veteran turned sleazy car salesman is initially annoying, though it does lead to a great payoff. Fred Williamson, despite being 82 years young, is badass in every scene he’s in.

It’s unfortunate that, despite its stellar cast, some don’t get much of an opportunity to shine. Wendt barely makes an impression, though I might have missed some clever Cheers references. David Patrick Kelly’s character only gets a brief moment of introspective depth, as you see him smoking a joint outside the VFW post, talking to himself, seemingly enjoying some sort of personal bliss. It’s just not enough to make it truly worthy of his talents.

Not Just a Retro Rehash

It’s obvious VFW was written and directed by someone who admires the genre films of the past. It’s a retro film, but made by someone who understands what made them great. It’s not just some half-assed B-movie grindhouse rehash which was popularized after 2007’s Grindhouse.

Nothing is a joke. Everything is played straight, even if the violence gets deliciously over the top. As far as I can see, there was hardly or any CGI used for the carnage. It’s all old-school special effects, and it’s so much better than all the normal digital crap.

It looks and feels like a movie made in that decade, not artificially so. It’s a film that can stand proudly among other successful retro-throwbacks, such as Turbo Kid, Hobo with a Shotgun, and Mandy.

It Delivers yet Has Few Surprises

VFW is a film that delivers exactly on its promise. Yet, as a genre fanatic, I would have liked a few more surprises. You can see everything coming a mile away. It was obvious when a character was supposed to die. It’s annoyingly easy guessing which character(s) will make it through to the end.

The tight script doesn’t waste a moment, yet I had wished a few more moments with the supporting characters. The chemistry between the performers was fantastic, I could have easily watch twenty more minutes of them goofing around. Each character, even in their limited screentime, seemed imbued with hidden depth, the trauma of war, and unsaid feelings. I understand it’s not supposed to be an Ingmar Bergman movie in terms of character depth, yet I wish I got to know the characters more before the story got going.

The villains of the story, especially Boz, are too bland. There’s one particular female gang leader who looks good in her ridiculous leather outfit, but she doesn’t have much characterization either. This is mostly due to the writing, not the performers. I understand they aren’t the focus of the story, but more interesting villains could have made the experience just a tad more satisfying.

After all is said and done, after every broken bone and severed limb, after each bad guy is good and dead, the film takes some time honoring those who are lost. Even with all the seemingly heartless violence, it’s nice seeing the characters mourn the people they’ve lost. Throughout the film, it’s obvious that these old geezers love each other and would be more than willing to die for one another if they had to.

In a way, despite the film’s ridiculous aspects, it honors the heart and soul of veterans out there. It’s utter pulp, but it’s got a heart of gold.

Thank you for reading! What are your thoughts on VFW? Comment down below!

[…] my mind, Joe Begos is one of the most exciting voices in genre cinema. Watching 2019’s VFW was like watching a film specifically designed for my delicate sensibilities. It had everything I […]

[…] general rough-around-the-edges aesthetic to Is You Daughter Home? recaptures the sensation of many grindhouse and exploitation films of past decades by making the killer look as unpleasant and unromantic as […]

[…] It takes place in the hills of Appalachia. There’s talk about being respectful to the locals, the love of the land. It features limey gangsters making a deal with a Southern Oilman. Those who stand against this deal are dealt with, are made to disappear. All goes well, then it doesn’t. It culminates in inevitable violence. […]

[…] I mentioned, horror-comedy is a fantastic genre to build a plot in a short amount of time. The shorts in Scare Package demonstrate the often […]

[…] guess, Get In is a film with something to say. It’s not just interested in providing cheap genre thrills. So if you’re looking for a simple horror fix, look elsewhere. But if you don’t mind […]

[…] particular character gets blown-up with a hand-grenade, the effect looks quite good (hurrah for practical effects). The final shootout has one of the characters accidentally shooting one of their own men, which is […]

That sounds destined for cult status, indeed. Thanks for writing about this movie, because I don’t think I would’ve heard about it otherwise.

My absolute pleasure. Happy to hear it.