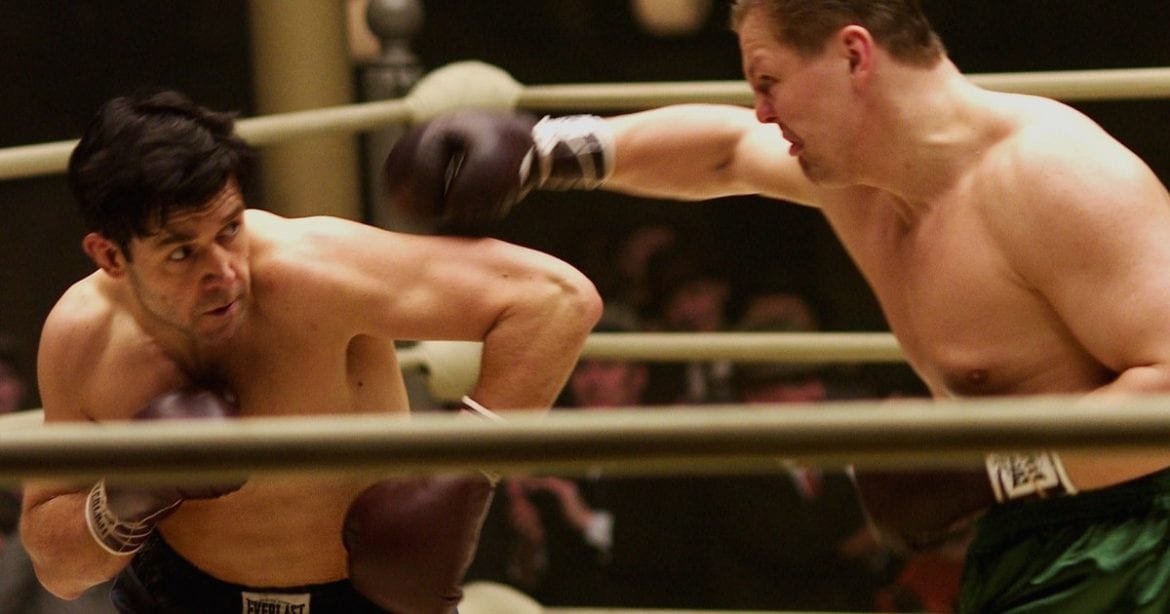 Sports movies are probably my second-favorite movie genre, right behind war films. They have an inspirational aspect that any other type of movie fails to capture. And now that we don’t have sports, it’s nice to at least have sports movies. A good example of this is Ron Howard’s Cinderella Man (2005).

Russell Crowe plays James J. Braddock, a down-on-his-luck boxer during the Great Depression that rises through it all to become a champion once again. It’s definitely one of my favorite boxing movies, if not one of the best sports movies ever made.

Ron Howard is a talented director and Cinderella Man is one of his best films. It has all the great elements that make sports films so enjoyable: inspiration, loss, challenges, determination, and a whole lot of heart. What truly makes this film stand out is Russell Crowe’s performance as Braddock. He has the right amount of cockiness and lovableness in his portrayal to make us fall in love with him.

I especially love that this film focuses on family. Braddock never forgets who he’s doing this for throughout the film. Every punch he remembers is for his family to help them live a better life. He loves his kids and his wife dearly and would do anything for them. Some sports films drum up unnecessary drama in family life as well, which just muddles the story and make it more stressful than it needs to be. Cinderella Man makes sure not to fall into that rut and gives Braddock a strong family while making sure his struggles are mainly in boxing.

As I said, Russell Crowe is the best part of this movie. He has a startling amount of charisma that makes all of his scenes electric. However, he does not hold up this movie by himself. Paul Giamatti, playing his trainer Joe Gould, is amazing. If we’re talking about underrated actors, Giamatti is close to the top of my list (I can prove it if you click here). Like Crowe, Giamatti is full of charisma and can really make you believe that he is who he is playing.

Renée Zellweger’s performance, on the other hand, still leaves a little something to be desired. Zellweger has this gift for playing characters that make me want to pull my teeth out. Her attempt at a Jersey accent is laughable; I’m not a huge fan of it. However, one bad apple doesn’t spoil the bunch in this movie, for Paul Giamatti and Russell Crowe can carry this movie to perfection.

The cinematography in this movie is incredible. I realize this element may not be so underrated since every sports movie is lauded for its cinematography, but Cinderella Man takes it to another level.

Ron Howard’s technique of using the boxer’s POV is beautiful. It takes you right into the heart of the action and makes every bout even more suspenseful. We can watch any bout from the stands, but only a movie like this can take us to where the action truly is.

I’m also a big fan of how Howard conveys pain to the audience. The blurred shots accompanied by a sharp note in the score accurately expresses the pain that accompanies a hard sport like boxing. It’s such an ingenious way to show the audience rather than tell them.

The best part of this whole movie is halfway through when Joe Gould is able to get Braddock one last fight to try and put food on the table for his family. Gould puts Braddock up against the number-two contender in the world, Corn Griffin, just as a throwaway fight to the make Griffin look good.

But Braddock stuns the crowd. Instead of losing badly as everyone expected, Braddock beats Corn Griffin, starting a streak of wins that would eventually lead him to the title of heavyweight champion of the world over Max Baer.

No Way, They’re in This?

I love seeing Clint Howard as a referee in the boxing ring. As Ron Howard’s brother, he tends to show up in many of his films. Trying to find his cameo is a lot like trying to find Stan Lee or Alfred Hitchcock in their respective films, and I love it.

What I Would Take Out

I would take out Mike Wilson’s character arc altogether. I don’t understand what his point in the movie is, other than to be a pal to Braddock during his time at the docks. I didn’t care when he died in the Hooverville and I spent most of my time angry at him. Wilson was basically just a bit of added drama that really didn’t need to be there in an already dramatic film.

The absolute peak of this movie is in the final fight with Max Baer. Baer is evidenced to be a literal killer in the ring, destroying men with uber-powerful punches. The fight’s promoter even forces Braddock to watch the film of Baer killing a man in a bout so that he can’t say he didn’t know what he was up against.

In the big fight, Baer hits Braddock with a massive punch to the head, giving it everything he’s got. Yet, Braddock recovers and keeps hitting back. It’s at this point that everyone realizes (as pointed out by the announcer) that Braddock can take anything Baer can deal. Baer can’t beat him. And that’s when Braddock wins.

Russell Crowe is far and away the very best part of this film. His prowess and his grace as a boxer are hard to miss. Anyone can see the amount of dedication that Crowe put into this film. He has the power, the tenderness, the confidence, and the perseverance to accurately portray one of the greatest boxers of the 20th century. I would have to agree with Russell Crowe himself when I say this is probably my favorite movie of his.

Hell yeah, I did! Boxing matches are always way more interesting on film than in real life. In film, you can have perfect musical cues and well-choreographed punches to make everything more exciting. Real-life boxing actually has very little of this choreography and music, which is lame.

Thanks for reading! What are your thoughts on Cinderella Man?  Comment down below!

If you understand boxing, it’s best to watch with a good commentator. There have been 4 UFC events since they started back up. Former heavyweight champ Daniel Cormier and commentator Joe Rogan do a good job explaining what’s going on.