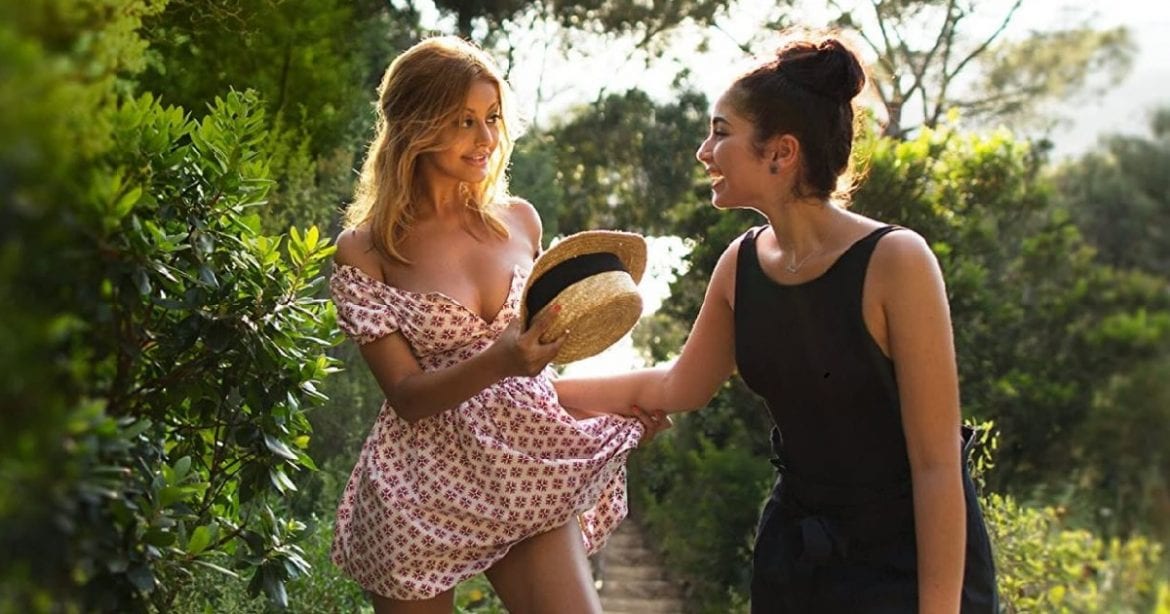 I have truly not been able to stop thinking about An Easy Girl, the latest from French filmmaker Rebecca Zlotowski. The last time I kept thinking about a movie this much after watching it was Portrait of a Lady on Fire, and I just got a sweet tattoo to commemorate it! So that goes to show you how seriously I take An Easy Girl. It’s gorgeous, it’s poignant, and I find that it ultimately shows the different masks and facades that young women are often coerced into putting on for the comfort of others. Zlotowski not only made incredible choices with casting, writing and cinematography, but she also really nailed it with the pacing of this film in a way that is hard to find in other films of the same vein.

Plot-wise, the film is pretty straight forward. Sofia, played by the extremely sexy Zahia Dehar, who looks like if Gigi Hadid and Sophia Loren had a lovechild, comes to Cannes for the summer to spend time with our protagonist, her younger cousin Naïma (Mina Farid). Naïma is 16, and trying to find her way in the world. She has a boisterous gay best friend Dodo (Lakdhar Dridi), whose sass often outshines any affection or kindness he has for Naïma.

Naïma doesn’t quite have her own personality yet. She wants to be an actress because Dodo wants to be an actor. She gets angry at men on the beach while Sofia calmly walks away. She cheers her friends and family on while watching from the sidelines, curious as to what would happen if she stepped in. One day, Sofia catches the eye of a rich yachtsman, Andres (Nuno Lopes), who looks like the lovechild of Oscar Isaac and Mark Ruffalo. (He’s handsome!) He charms Sofia, and Naïma is stuck with Philippe (Benoît Magimel). Philippe is older and more reserved than Andres, and he and Naïma strike up a mutual respect and friendship.

That’s pretty much all that happens without too many spoilers, but the lack of an action-packed plot allows for a lot of very intense and interesting relationships to form and develop, particularly between Sofia and Naïma. I think the film studies these two characters more than anything, which I love.

Sofia in particular is one of the more dynamic characters I’ve seen on-screen this year. At first glance, when she is swimming topless, with her incredible body and blonde hair out for the world to see, I thought “Oh, femme fatale, young girl, got it.” I did not, in fact, get it. Sofia is wise beyond her twenty-two years. She is charming, she’s smart, she’s flirtatious, and what I find to be the most interesting thing is her completely unabashed kindness. Not only does she treat Naïma extremely well, but she also goes out of her way to be kind to people who are openly hostile towards her.

It’s sometimes unclear whether this is a facade or not, but Sofia doesn’t want us to know. Sofia does not want anyone to see weakness in her. The emotional climax of the movie depends on her losing that mask, and it becomes such a poignant reminder of how society treats the women it simultaneously admires and disrespects. Sofia has learned to play her cards right, and I found her ultimate goal to be to shield Naïma from the game entirely.

Dehar, herself having an interesting backstory involving her looks and sexuality, really embodies all these character traits with such grace, and so naturally, that I found myself entranced with Sofia before I could even realize it.

I have to compliment Farid’s performance as Naïma as well. If Dehar is able to perfectly embody experience and poise, Farid is her equal in embodying the sort of unsure and awkward confidence that comes with being a 16-year-old. Farid connects so well with all her co-stars, even with those she doesn’t have much screen time with. The film being shown through her eyes and her experience makes it that much better that not a ton actually happens. When a person is a young adult or teenager, everything is make or break. Naïma’s embarrassment in one scene changes the dynamic of a huge dinner party. Naïma’s attempt at seduction ends in a sort of empathetic camaraderie rather than something awkward and cringeworthy. Naïma is able to slowly break from the personality she has crafted for herself, and instead blossoms into the person she wants to be. Sofia teaches her to let go of her mask and her social inhibitions to pursue her own happiness. It was a brilliant casting choice.

Georges Lechaptois’ cinematography is a three-course meal for the eyes. From the first sequence, Lechaptois transports us to a delicious vision of Cannes with bright blue waters, gorgeous people, and absolutely decadent scenery all around. Every time the camera focuses on Sofia, I am transported into a saturated dreamscape. It is so fresh and dreamy, and I cannot believe it looks as good as it does. I didn’t know it was possible to watch a film this gorgeous. In particular, one dream sequence features Sofia on the beach with a sea urchin between her legs. I was absolutely gobsmacked by this and it’s been on repeat in my head again and again and again.

My final comment is that I am thrilled An Easy Girl is only 90 minutes. My god, the 90-minute film is a lost art, and Zlotowski manages to fill every frame with beauty and meaning. Zlotowski tells the story that needs to be told and makes the audience feel what needs to be felt without dragging anything into the gratuitous. There is no exploitation of emotions, sexuality, or wealth to make a heavy-handed point. So often, I find, particularly in the age of streaming services, filmmakers have had a field day with the 2-3 hour long film, and it is rarely necessary. An Easy Girl is a reminder that a film doesn’t have to be a third of a working day to have an impact, and have meaning. As a result of this 90-minute time frame, the pacing is perfect. Every emotional beat and plot point hits at the exact right spot, and the energy really benefits from this, truly.

An Easy Girl is a moving and gorgeous masterpiece. It’s a film of a higher caliber that doesn’t come along every day. I’m probably going to watch it again this week, because I think it needs a second viewing for me to fully appreciate it. And thankfully, it’s on Netflix, so I can do so pretty easily. Even if you aren’t in it for the beauty of the message and the characters, you should check it out for the beauty of the cinematography. It’s so unique and colorful that it truly transported me out of my little apartment onto beaches I can only dream of seeing right now. And if that’s not enough for you, Sofia is the most nuanced and interesting character I have seen this year, which is particularly meaningful in a year when all I do is watch whatever comes across my recommended feed. I can promise you, this is well worth the watch. Bon voyage, reader!

Thank you for reading! What are your thoughts on An Easy Girl? Comment below!