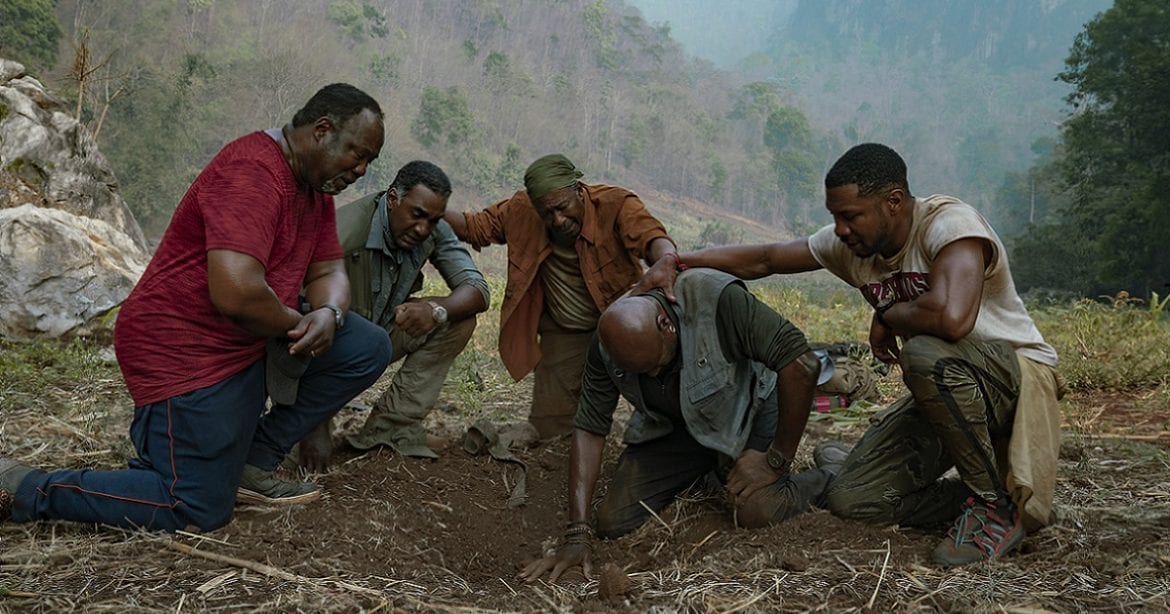 Spike Lee’s newest feature is an absolute gut-punch. I don’t think any introduction besides that would do Da 5 Bloods justice. Lee’s latest follows four Vietnam veterans, jovial Eddie (Norm Lewis), an often-drunk Melvin (Isiah Whitlock Jr.), measured and thoughtful Otis (Clarke Peters), and the wild card Paul (Delroy Lindo). The group travels back to Vietnam to recover the remains of their Bloods squad leader, Norm (Chadwick Boseman), who was killed in action, and also to recover a large fortune of US gold they buried when they were in the war.

The plot goes on from there, but I haven’t enjoyed an action movie this much since I watched Split. The twists and turns that Lee plants in this heist make for not only an engaging caper, but a much-needed commentary on Black Vietnam veterans and how they fit into the political landscape of the USA.

The last thing I want to do is spoil the film, so I won’t. The plot outline I’ve given is pretty much all you need to know going into it, but I will give you, dear reader, a couple more points. The four veterans are almost immediately joined by Paul’s son, David, (Jonathan Majors), a teacher who graduated from Morehouse. Majors adds such an element to this film of the relationship between Paul and the rest of the cast, so his inclusion is paramount to the success of the film.

Of course, to smuggle something to the tune of $7 million of gold back into the United States, the Bloods have to involve Tiên (Lê Y Lan), Otis’ old flame, and a Frenchman named Desroche (Jean Reno). Desroche promises he will get the money to various off-shore accounts that the Bloods will be free to draw from, which, is up for debate throughout the entire film. As a quick sidenote, when I first saw Desroche and he spoke, I literally wrote “This is a terrible French accent,” however, Jean Reno is of course a French actor. I wanted to throw that in to remind everyone that I am not an authority on anything. Particularly the authenticity of French accents.

Regardless, the plot is an absolute rollercoaster. It’s pretty clear that we are in for such a ride when the Bloods, in theory, reach their objective about halfway through the film. Lee sprinkles in some great little subplots and features that really build the world around the Bloods, and help to contextualize a lot of their behavior. Lee also puts in a bunch of videos and stills of Martin Luther King Jr., Malcolm X, Angela Davis, Marvin Gaye, Aretha Franklin, the Kent State Massacre, the Fall of Saigon, among other notable figures and events from the time of the Vietnam War. These also help to contextualize the film, and while some of it is a bit on the nose, Lee employs this strategy in a lot of his films, and I always think it’s an asset to his storytelling.

Particularly, it helps to show how the Bloods have suffered at the hands of the US government. They fought in the Vietnam War for a country that didn’t think they deserved, really, anything. As Tiên says, the white GIs taught the Vietnamese the N-word to refer to their Black compatriots. The Bloods fought in a war they didn’t want to, and committed acts they didn’t want to commit, all for a country and a society that had no interest in them beyond use as cannon fodder.

It’s a powerful indictment of America, and I have to applaud its timely release. Obviously, Spike Lee couldn’t have predicted the murders of George Floyd, Breonna Taylor, Oluwatoyin Salau, Tete Gulley, Ahmaud Arbery, and the many others who have been victimized by the American paramilitary state, but I know that Lee has been advocating for this revolution we are in for a long time, and this film acts as another marker to make sense of it for the ignorant among us, myself included. It’s really a necessary film to watch in 2020.

The thing is, if Delroy Lindo doesn’t get an Oscar for his performance here, then the Oscars do not mean a thing. Paul’s monologue as he ventures into the jungle is unparalleled in recent cinema, and gave me complete and total goosebumps. Paul is ravaged by PTSD, and is constantly sporting a Make America Great Again hat. He is by far and away the most complex and entrancing character on screen, and Lindo brings him to life. I hated Paul. I loved Paul. I wanted Paul to leave. I was sad when he left. Rarely have I felt such affectionate animosity towards a character, maybe only with Elisabeth Moss’ Becky Something in Her Smell. Both of these characters are so damaged, so traumatized, and they can’t really move past it.

Paul is so consumed with guilt for what he has done, and how he has acted in the past, that he cannot engage meaningfully in the present. Like I said, Lindo’s performance is singular in how much depth he gives to this character. I don’t mean to single Lindo out to diminish the other performances. Everyone does an incredible job, especially Majors as David. However, I would be remiss not to point out Lindo’s excellency. It’s truly an incredible performance. I’m still thinking about it, a lot. 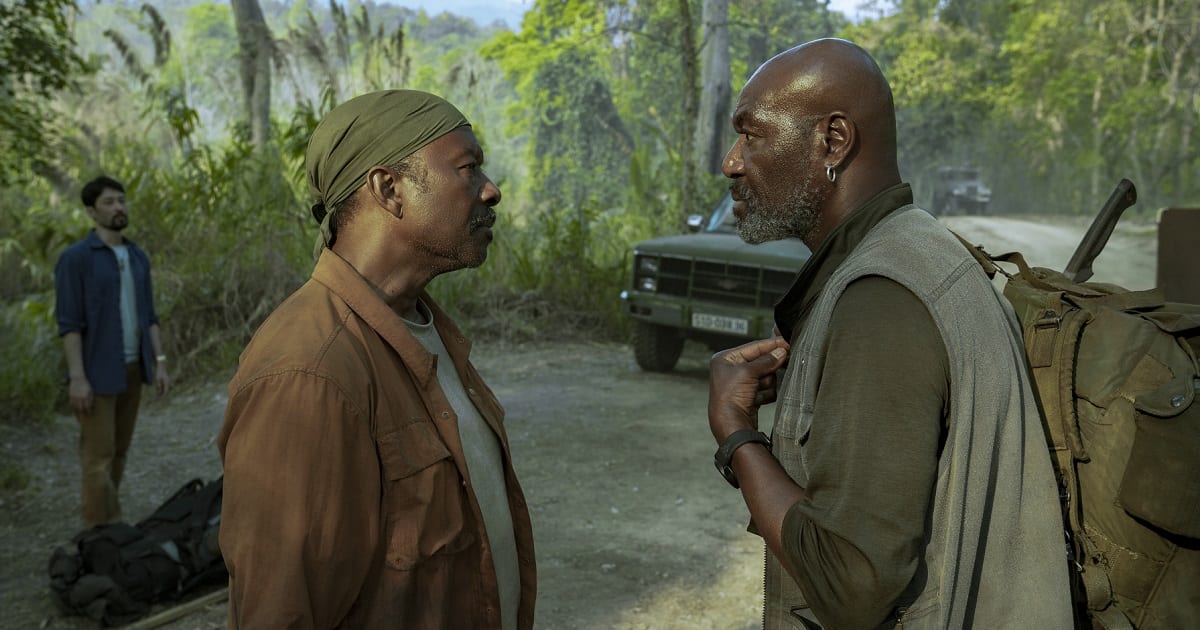 Terence Blanchard’s score and Newton Thomas Sigel’s cinematography tie Da 5 Bloods together into a gorgeous, if harrowing, portrait. Blanchard’s action-packed score fills the atmosphere of the movie, and Marvin Gaye’s music complements the moments where a more traditional score wouldn’t do the trick. Sigel, the Director of Photography for Bohemian Rhapsody, does a masterful job of capturing the beauty of the Vietnam countryside, while also showing the long-term effects of the American War, as the Vietnamese call it.

It’s always refreshing to see a film where the DP actually tries to make Black people look good. A lot of lighting and film techniques were developed with white people in mind, making them look great. Lee has always made it a priority to make sure his Black stars are lit and filmed well, which, of course, he does again in Da 5 Bloods, with help from Sigel. Most notable, I found, was the transition from digital to 16mm film, for the present and past sequences, respectively. It added a layer of texture that otherwise the film would have been deprived of. To me, it was an important visual indicator of time, similar to Greta Gerwig’s use of blue and orange filters in Little Women. The background and the music and everything around the actors add to the ambience of this complex film, and enhances the story ten-fold.

I do want to add an interesting note I saw earlier today, after I submitted the first draft of this article. Netflix actually pushed back against Lee and Sigel’s desire to use 16mm film for the flashback sequences. Of course, there was no pushback when Martin Scorsese wanted $150 million for de-aging in his most recent gangster epic, The Irishman. I didn’t even know if this was appropriate to cite in this review, but I think it’s important to acknowledge. Spike Lee is, in every way, equal to Martin Scorsese. They are both legends of filmmaking who are no doubt making Netflix a ton of money with recent collaborations.

So, why the hesitancy with Lee? Both are modern auteurs whose very names evoke prestige. Scorsese gets a large fortune to put his actors into the uncanny valley with de-aging, but Lee has to grovel for 16mm film? A Black filmmaker, of equal merit, has to fight for something his white colleague could get, no questions asked. This point absolutely infuriated me, and I wanted to commend Lee’s fight for the 16mm. The depth it gives to the picture is marvelous. It certainly seems a better use of money than the de-aging, but that’s not even really my point. If Netflix is going to trust a white filmmaker with an expensive piece of film technology, then they should go ahead and trust a Black filmmaker the same way.

I love Spike Lee. One of my favorite movies of all time is Do the Right Thing, which is another piece of necessary viewing in 2020. In both Do the Right Thing and Da 5 Bloods, Black men are told that they have to sacrifice their health, their livelihood, their dignity, their honor, for a country and a society that considers them no more than thugs, delinquents, lesser-than-white people. And in both, the protagonists say “Screw that. I am worth more than this.” And they are. They always have been, and it’s a shame that American isn’t quite caught up on that yet.

I encourage everyone to watch Da 5 Bloods. But, in particular, I encourage people who are feeling skeptical about the current moment to watch it. Take it in. Allow yourself to bask in the discomfort, and learn. And frankly, enjoy yourself. Enjoy a piece of incredible filmmaking that isn’t your usual cup of tea. This is a far cry from my go-tos of Jane Austen adaptations and lesbian romance. But, that is, I think, precisely why I enjoyed it so much. White people like me need to get out of our comfort zone and deal with the fact that Black people have been victimized by us for years. And Da 5 Bloods is an essential part of the modern canon that can show why.

Thank you for reading! What are your thoughts on Da 5 Bloods? Comment below!

[…] as you watch, you begin to ask yourself, “what does Black Power mean?” That’s the question several of the Mangrove Nine put to each of the jurors in […]

[…] the protests against systemic racism in the US right now, the way the cops are being so defensive and refusing to admit any fault and […]

Loading...
Reply
Chadwick Boseman Was and Will Continue to be a Groundbreaker | MovieBabble August 29, 2020 - 4:44 pm

[…] Few actors ever get the chance to breathe life into fictional giants such as T’Challa and Stormin’ Norm. Yet Chadwick Boseman did all that in a little over a decade, and he was just getting […]

[…] in a long line of baffling movies to appear on the streaming giant’s puzzling feature. Sure, Da 5 Bloods, Extraction, and The Old Guard make a lot of sense as some of the most high-profile post-COVID […]