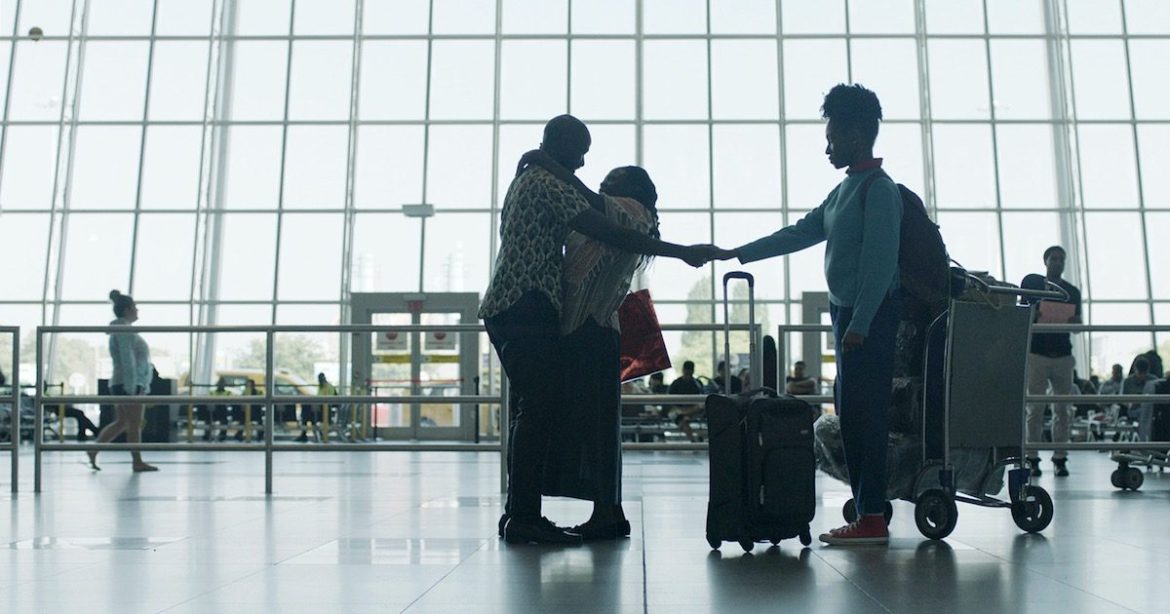 There’s something about the way Farewell Amor demands your attention that is unbelievably comforting. Maybe it’s because it functions as a triptych yet still seems formless and character-driven. Perhaps all the wonderful, reserved performances put your mind at ease. Or, maybe it’s just because it’s a damn good movie that never calls attention to how good it is.

The film opens at the JFK airport. Walter (Ntare Guma Mbaho Mwine) is waiting to reunite with his wife and daughter, Esther and Sylvia (Zainab Jah and Jayme Lawson), after 17 years apart. He stands there awkwardly with some flowers, visibly unsure of how to engage with them. Following a war outbreak in their home country of Angola, Walter immigrated to the U.S., while Esther and Sylvia waited (and continued to wait) for their visa approvals. It’s a sad reality for so many families looking to start a new life in this country — by the time Walter reconnects with them both, it’s almost like he’s meeting them again for the first time. Especially with Sylvia, who was just born before Walter left.

Writer/director Ekwa Msangi returns to this initial meeting three different times, using it as the jumping-off point to share Walter, Esther, and Sylvia’s perspective on living together once again. The first story details Walter feeling overwhelmed by having Esther and Sylvia arrive, having carved out a life for himself over the years as a cab driver; next, Sylvia assimilates to life at her new high school and becomes interested in dance; finally, Esther struggles to hold onto her religious roots and feels neglected by Walter while also feeling generally in over her head from the extreme culture shock.

Walter’s story is my personal favorite, with his life seemingly upended by his wife and daughter arriving. Ntare Guma Mbaho Mwine carries the character with reserved compassion and survivor’s guilt; he’s truly extraordinary and is one of my favorite male performances of the year. In the time he waited, he moved in with a nurse named Linda (Nana Mensah), and not because he was necessarily looking to cheat on his wife — he was just so damn lonely.

The elements of a more contrived movie are visible in Farewell Amor. The possible blowup when Esther realizes Walter was seeing another person lingers over the more understated character beats, and Sylvia’s romance and dance subplots could have been extremely hokey in the wrong hands. Those pieces are there, but Msangi treats each character with the utmost dignity and grace. Unexpectedly, Linda was the person to keep Walter’s spirits up about seeing his family again, not the soulless monster looking to ruin his marriage as you might expect. Sure, there are disagreements and conflicts along the way, but Farewell Amor remains gorgeously quiet and soulful. As the debut feature for Ekwa Msangi, this is one hell of a calling card.

Thank you for reading! What are your thoughts on Farewell Amor? Comment down below!