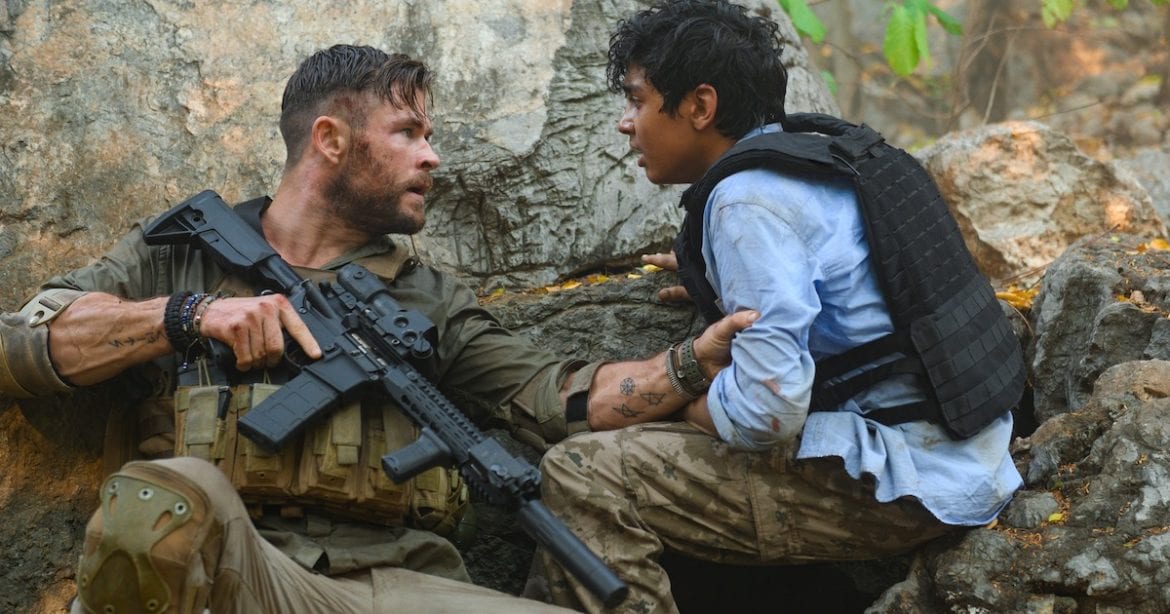 In a post-Avengers: Endgame world, we live in a time where the Russo Brothers are now described as “visionary” directors in marketing material, when instead, they followed a decade-long plan to its conclusion, weaving in the stylings of all the Marvel superheroes’ respective films. An inarguably impressive feat never done before in the history of movies, yes, but not “visionary”, which implies elements of auteur theory and creative foresight for the future of movies.

Regardless, studios are now running to the Russo Brothers for pitches, hoping the duo can shepherd plenty of successful projects outside of the MCU. The Russos are heavily involved in Extraction with another round of producer credits and Joe Russo writing the screenplay. Although, like the immediately forgettable 21 Bridges, Extraction is mostly lifeless.

Tyler Rake (Chris Hemsworth) is a black market mercenary, paid top dollar for extractions, and other, more sinister assignments around the globe. Extraction follows his most deadly mission yet: extracting young Ovi (Rudhraksh Jaiswal), the son of India’s most infamous drug lord, from Bangladesh, where he has been taken prisoner by that country’s most infamous drug lord, Amir Asif (Priyanshu Painyuli). That’s it. That’s the plot. Gotta love simplicity!

There’s also some stock tragedy in Tyler’s past that leaves him deeply depressed and unafraid to take a bullet, but that’s not important. What is important is the insane stunt work. Director Sam Hargrave is a long-time stunt coordinator, having worked on some of the biggest blockbusters of recent years including Avengers: Endgame, Avengers: Infinity War, and Captain America: Civil War, to name a few. Although I’m not a fan of Extraction, I’m still buying stock in Sam Hargrave’s career moving forward as an action director. He clearly has a few tricks up his sleeve, mainly in how he stages the action set pieces, which are brutally kinetic and exciting.

You can tell Hargrave was very much inspired by the John Wick franchise, or at least its stunt work. Hemsworth enacts a lot of the “gun-fu” techniques Chad Stahelski and David Leitch popularized in the franchise while also employing a lot of the same balletic fighting styles. Some fight sequences feel ripped entirely from one of John Wick’s clashes. But given Hemsworth’s hulking stature — he’s looking extra swole in Extraction — Tyler does take on more of a brawler strategy at times, which is a nice addition to these stunts that threaten to feel repetitive as more stunt crews look to copy one of the biggest recent success stories in the genre.

Hargrave creates a few showstopping sequences. One in particular, which starts in a forest, leads to a car chase, then a fight in a stairwell, and finally sprawls into a street market, all while stitched together to look like one continuous take, will turn into a twelve-minute clip action junkies watch on YouTube repeatedly. There’s some CGI trickery involved, but Hargrave expertly stages each portion, allowing the crisp choreography to take over. 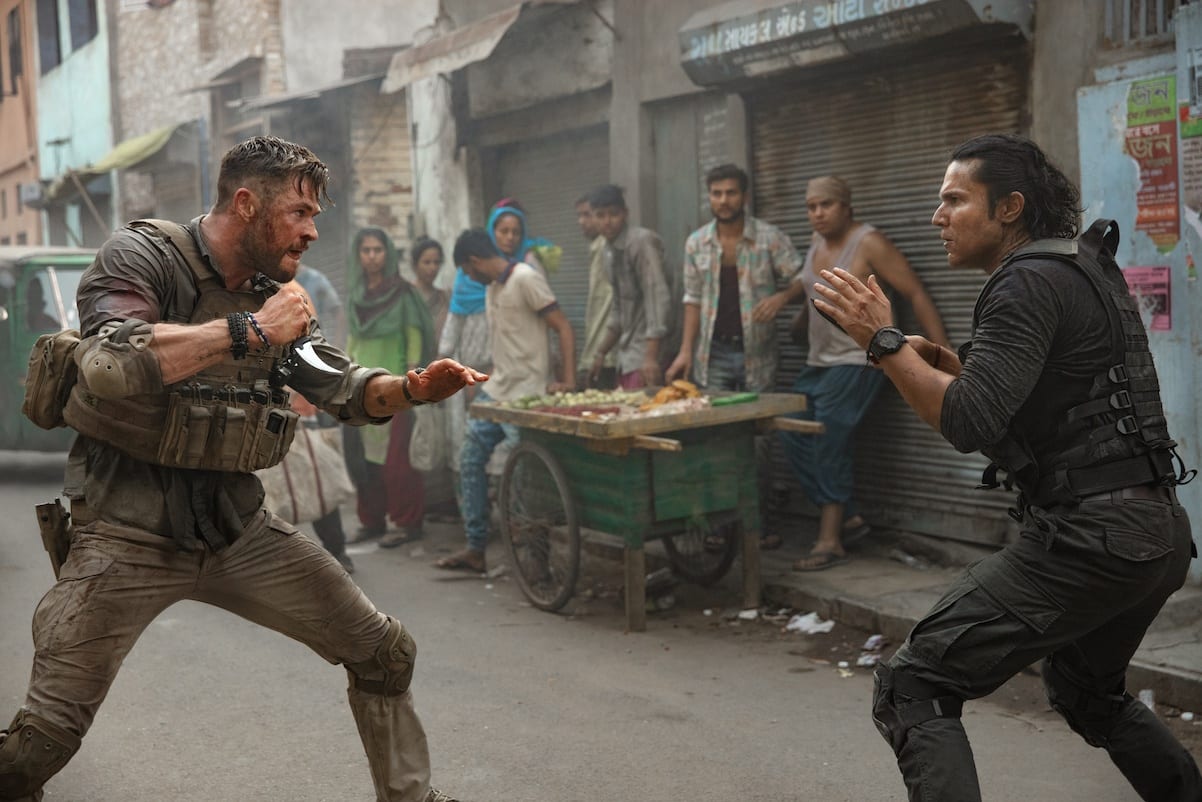 Extraction Has a Distinct Lack of Playfulness

At the same time, however, Extraction is deadly serious, to the point where it becomes entirely self-unaware machismo. I never found Extraction fun or thrilling. Just tedious.

Extraction treats itself as capital “C” cinema, when it should be attempting to have a bit more fun, given all the hilariously insane stunts. A different tone may have also helped ease the idea that Extraction is the latest in a long line of action movies to have a badass white dude clean up the streets in a foreign country.

Granted, Extraction‘s messaging in that respect isn’t sinister like Rambo: Last Blood, which is overtly problematic in every which way. In actuality, Extraction does the most to distance itself from being labeled problematic by attempting to avoid the topic of race altogether. But even in remaining standoffish to the idea, seeing Hemsworth obliterate one anonymous Indian henchman after another is an uncomfortable sight.

To massage this piece of the screenplay, Hemsworth’s Tyler is nothing more than a mercenary out for money. (That is until he has a saccharine redemption arc later on in the film.) Not some white knight looking to liberate all of India. The same goes for all parties involved in this deadly extraction, who are all focused on the money at stake. No one particularly cares about much except their bottom line. Consequently, life doesn’t seem to matter at all as children are tossed off buildings and bullets fly without much regard for, well, anything really. Contrived glimpses of Tyler’s child who died a few years before the events of the film don’t help, either. Watching such a disregard for humanity in motion is more offputting than anything else, and it sucks all the life out of the movie.

It also makes the stock “hardened mercenary learns to have emotions” relationship that builds between Tyler and Ovi as their journey becomes more perilous even sillier and unearned. Extraction has no desire to have a human element; it merely feels obligated to have one.

Chris Hemsworth Outside the MCU

Stuck in all the “wicked hardcore” violence is a very committed performance from Chris Hemsworth, who continues to search for an iconic non-Thor role. He’s been in a few good movies; many turn to The Cabin in the Woods and Rush, whereas I still contend his small role at the beginning of Star Trek (2009) as George Kirk is the best acting of his career so far. But Hemsworth’s buzzy non-MCU movies have failed more often than not.

Though I would think most agree that Hemsworth is never is the problem in his bad movies. (His attempted accent in Blackhat notwithstanding.) He wasn’t going to save The Huntsman: Winter’s War or Men in Black: International. Projects like those were doomed before he stepped on set thanks to hellish production issues. I get the sense Hemsworth is still searching for what his lane as a star should be, especially since his time as Thor seems to be reaching its endpoint.

Extraction isn’t his silver bullet, but it does speak to a lot of his strengths as an actor. Hemsworth has always been more of a brute force onscreen with great comedic timing than a thespian, which seems to make him a perfect fit to star in high-octane, stunt-heavy action films for the foreseeable future. While Extraction doesn’t work, I wouldn’t be opposed to seeing Hemsworth and Hargrave team up again and give it another go, or Hemsworth finding another action franchise to call his own. He’s an incredibly talented fighter who throws himself into the physicality of the role. Some of his knee-jerk facial reactions and grunts in battle are really terrific, and his whip-smart personality shines brightly when the script allows it, such as the one openly silly scene where he slaps a few teenage fighters around instead of engaging fully with them.

Who knows, maybe Extraction is the gateway to better things for Hemsworth. As for the movie itself, however, it’s mostly a wash.

Thank you for reading! What are your thoughts on Extraction? Comment down below!

[…] side even after attaining his officer rank, something many officers do not do. He is honest with his unit, as he sacrifices an obstacle course record to help a fellow officer candidate overcome an […]

Loading...
Reply
'Samurai Marathon' Sprints Past the History that Inspired It Towards Something Greater | MovieBabble August 1, 2020 - 9:39 am

[…] one place where more attention could have been placed was the hand-to-hand combat. The fight choreography was confusing at times. Two warriors would line up with swords in what would be expected to be an […]

[…] of baffling movies to appear on the streaming giant’s puzzling feature. Sure, Da 5 Bloods, Extraction, and The Old Guard make a lot of sense as some of the most high-profile post-COVID releases in the […]

[…] record with original Hollywood action movies is patchy at best. When the so-so Extraction is among the finer examples of their big-name blockbusters, there’s something not […]

Spot on. A whole bunch of competent action that I absolutely didn’t give a shit about emotionally.

Yup! Super disappointing — I had been looking forward to this one.