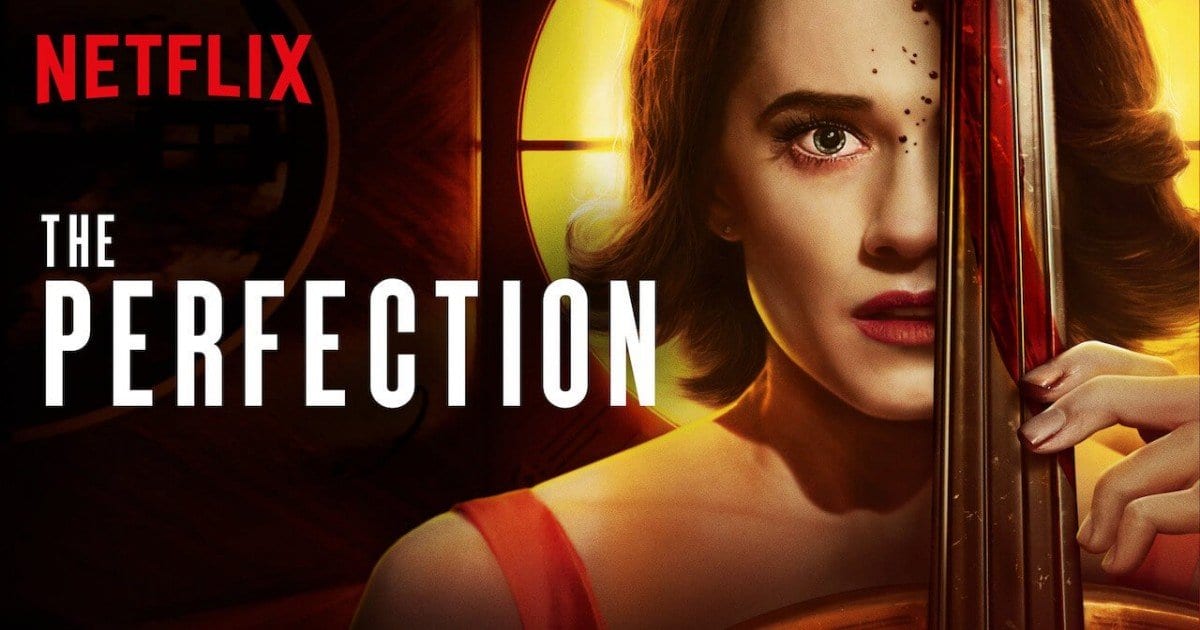 The Perfection reportedly received rave reviews at its screening at Fantastic Fest and was described as being both “elegant” and “terrifying.” Such acclaims naturally piqued my interest. I hadn’t seen the trailer beforehand, and I only saw a few disturbing glimpses of the film from its Netflix menu. I, therefore, had no knowledge of what I was in for. Even the premise was still alien to me.

After I watched the film I had to take my bearings. I asked myself, “What the heck did I just watch?” I suddenly felt crazed. “That was one sick, twisted, morally reprehensible piece of cinema!”

Which obviously means that I absolutely loved it!

When Charlotte Willmore (Allison Williams) was in her teens, she was a cello prodigy under the strict tutelage of instructor Anton (Steven Weber), while she lived in his esteemed musical conservatory. But she had to abandon her musical career when her mother suffered a nearly fatal stroke.

Years later, after her mother passes away, Charlotte travels to Shanghai to meet with Anton. There she encounters Elizabeth (Logan Browning), who replaced Charlotte at the academy in her absence and is now living the life Charlotte would have had, if she hadn’t had to care for her mother.

Despite their differences, Charlotte and Elizabeth form a deep connection; something that goes beyond their affinity for the cello. They develop a sexual relationship and Since Elizabeth had planned to go on a two-week holiday in the East, she asks Charlotte to accompany her.

When their trip starts, however, things quickly spiral out of control and the horror, both physical and mental, begins to reach its terrifying crescendo.

The central performance by Allison Williams is revelatory. Most people probably know her as the hellish girlfriend, Rose Armitage, in Get Out, but she had already shown incredible range before then with her performance in HBO’s Girls. She even shows some dancing and singing talent in NBC’s Peter Pan: Live!

Nothing is comparable to her work in The Perfection. Every acting note of hers is perfect. From dramatic range to being a frightening presence, to even causing a few chuckles. The complexity of her character shows in how she vacillates between likable and extremely unlikable, and it works because of Williams’ incredible performance.

The supporting cast should also not be underestimated. The anxiety-inducing first half is due to Logan Browning’s unhinged performance — who also manages to inspire a few intentional chuckles.

I’m also happy to report that the great Steven Weber, whose talents have often been wasted in mediocre fluff (a whole lot of average Stephen King adaptations), shines as the horrifically pretentious teacher Anton — whose role is surprisingly important in the ensuing narrative.

On a technical level, this is undoubtedly Richard Shepards greatest effort. While more experienced in the field of television (he directed numerous episodes of HBO’s Girls), he has made noteworthy films before. One of them being the flawed yet admirable Don Hemingway, which showed Shepards’ ability to exploit the dramatic and comedic talents of its central performer, Jude Law.

Besides The Perfection, The Matador (2005) is Shepards’ greatest cinematic achievement, though it’s impossible to compare the two. The Matador is a comedy-drama about the friendship between an alcoholic hitman (Pierce Brosnan) and a downtrodden businessman (Greg Kinear) while The Perfection is a psychological horror/thriller, whose main theme I can’t even mention without spoiling a little of the experience.

All three films share only one similarity: none of them have a typical narrative structure. And The Perfection stands out as a completely different animal.

The Perfection feels like a tightly constructed piece of work. The most successful technical aspect is probably the editing, especially in its horrifying reveals along the way. Shepard also makes unique camera-angle choices, one, in particular, has a thrilling sequence that for a large part, is filmed from just a close-up of a character’s face.

The film’s unique style is also complemented by its diverse choice in music. Classical music makes up the preponderance of the score, but there are also a few hip-hop songs (which I’m personally not a fan of, but it works wonderfully in this movie), and even a beautiful song from the synth-band Chromatics.

Does it Actually Reach ‘Perfection’?

The heat is on. Image via The Film Stage

There are a few flaws within its plot that will certainly drive many nitpickers insane. If one thinks long and hard enough about some of the revelations, one could argue that things could have been handled in a different way in order to achieve that result.

There’s also an argument to be made that after the first big revelation, the film loses a little steam. But luckily, the final act finishes off everything perfectly and the final shot is beautiful and horrifying at the same time.

One other minor gripe is that some of the dialogue over-explains certain plot points. A few particular revelations are unnecessarily spelled out for us, despite the ramifications being rather obvious. Luckily it doesn’t happen enough in the film for it to be a major issue.

While our cinemas have been poisoned by live-action Disney remakes, The Perfection is another testament of how cinema is still going strong — and how the best movies are probably going to be streamed rather than screened in theaters.

So stay home, don’t go to the cinema (unless you are planning to see John Wick 3) and sit down on your couch and watch this film instead. Strap yourself in, though, since the ride is going to get crazy…

Image via What’s on Netflix

Thank you for reading! What are your thoughts on The Perfection? Comment down below!

The only reason I’d watch this is because of my crush on Allison Williams.

Seconded on “What the hell was that?”

I don’t know if it was a great movie but it definitely wasn’t boring. I’d recommend it…to people I thought were on the same wavelength. It’s going to be a polarising one.

What the ‘Jurassic’ Sequels Fail to Learn From...