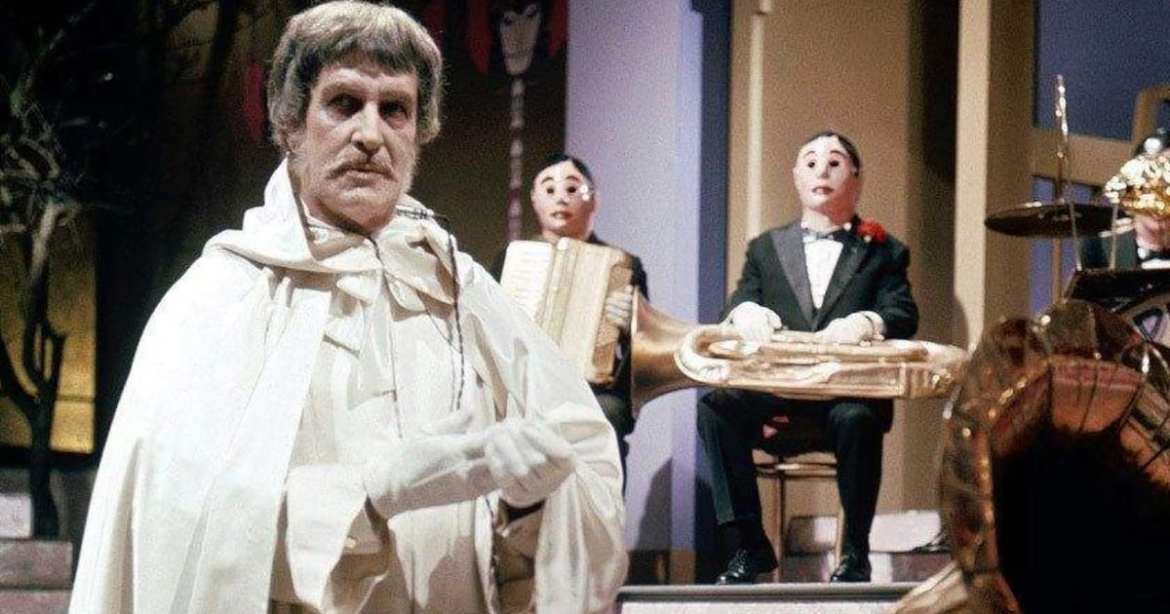 I had never heard of The Abominable Dr. Phibes until a few months ago. In my boredom browsing YouTube one day, I found it in my recommended. Don’t ask me why it was recommended or why I decided to watch it, but I was unbearably bored. So I watched it. And I was appalled and intrigued.

The Abominable Dr. Phibes is disgusting and gory. Within the first 15 minutes, I was taken aback and pulled in.

The film does not give you a chance to settle in. The first shot is of Dr. Phibes in a large, black hooded robe dancing with a strange woman. There is no explanation given for this throughout the film and it’s creepy.

Then we move to a random man’s house. He is getting ready for bed and everything seems normal. That is, until the bats are released.

That’s right: bats. Our first victim is shredded to death by bats. It’s insane as it sounds.

At this point, I should’ve realized what I was getting into, but I stubbornly forged on. At the 15 minute mark, our lovable murderer Dr. Phibes attends a mask party. He offers a man a frog mask and offers to help him put it on. But, something’s not right. The mask keeps tightening and tightening until the man’s skull explodes. We get to see his anguish from a first-person view, hearing the crunching of the skull and seeing his vision go red. Right in the middle of this fancy party.

And isn’t it ironic that our victim was a head “shrink”?

At this point, I wondered what the hell I had found myself watching. It wasn’t a dark sort of gory like Saw. In fact, the movie was actually… funny? Was this allowed?

Inspector Trout (Peter Jeffrey) is our hero of the story (though he really doesn’t do a great job of it). He is investigating the string of murders and attempting to stop Dr. Phibes. The problem: he sucks at it. He’s quick with a witty comment but not so quick when it comes to stopping the murders. Trout literally opens the door for a victim who is subsequently stabbed by a golden unicorn statue. Of course, with unicorn horns being twisted, they literally have to unscrew the man from the wall in a hilarious bit.

The Abominable Dr. Phibes is a dark comedy in every sense of the phrase. Mixed in with all of these gory death scenes is a lighthearted tone that I wasn’t expecting. It’s a lot like the concept of comic relief in Shakespeare… if Shakespeare killed his victims by having locusts eat their faces.

The writers of The Abominable Dr. Phibes sure had fun with the murders. Every murder follows the ten curses that were inflicted on the pharaohs of Egypt in the Old Testament. First, the bats. Then, the frogs (the frog mask). Preceding that was the boils, which we are not shown on screen but are told about — a man was stung to death by bees. This would be followed by blood, lice, flies, livestock pestilence, locusts, darkness, and the killing of firstborn children, or something similar to it.

If I had written the movie, I probably wouldn’t have gotten near as creative as they did. I mean, who sees the curse of hail and immediately thinks: lock the dude in the back of a car with a freezing machine that just freezes the person to death while pelting hail in their face. That’s so hardcore.

Seriously, props to the writers who had a grisly good time with this one. They didn’t have to go that hard for us, but they did anyway.

Vincent Price is an incredible actor. I’ll admit that I haven’t seen as much of his stuff as I would like to, but what I have seen him in is just phenomenal. The man is just downright creepy. What really sells me are his eyes. Dr. Phibes is no longer able to talk or really open his mouth, but his eyes show all the expression that he needs.

Price is super convincing in all his roles, but he nails it with Dr. Phibes. He is passionate about his goal to eliminate all the doctors who were responsible for killing his wife in his eyes. His determination is frightening. Also, he towers above every other character in the film, lending him an air of ominous power.

This has to be one of his best performances. The Abominable Dr. Phibes truly showcases how devious and scary he can be. It always astounds me how innocent and normal he looked in real life and how menacing he could be on screen. That 6’4″ height was probably one of his biggest assets.

The Abominable Dr. Phibes has disgusting, stomach-wrenching gore, but it’s beautiful. It pushed the envelope of what dark comedy could be and set a precedent for future horror and dark comedy films. The best way to describe it is slimy, yet satisfying. It will make your skin crawl, but you can’t stop watching it.

Especially that scene with the boiled cabbage. Who knew grasshoppers were such a fan of the stuff?

Thank you for reading! What are your thoughts on The Abominable Dr. Phibes? Comment down below!

Phibes is what Saw could never be. Entertaining and mysterious.