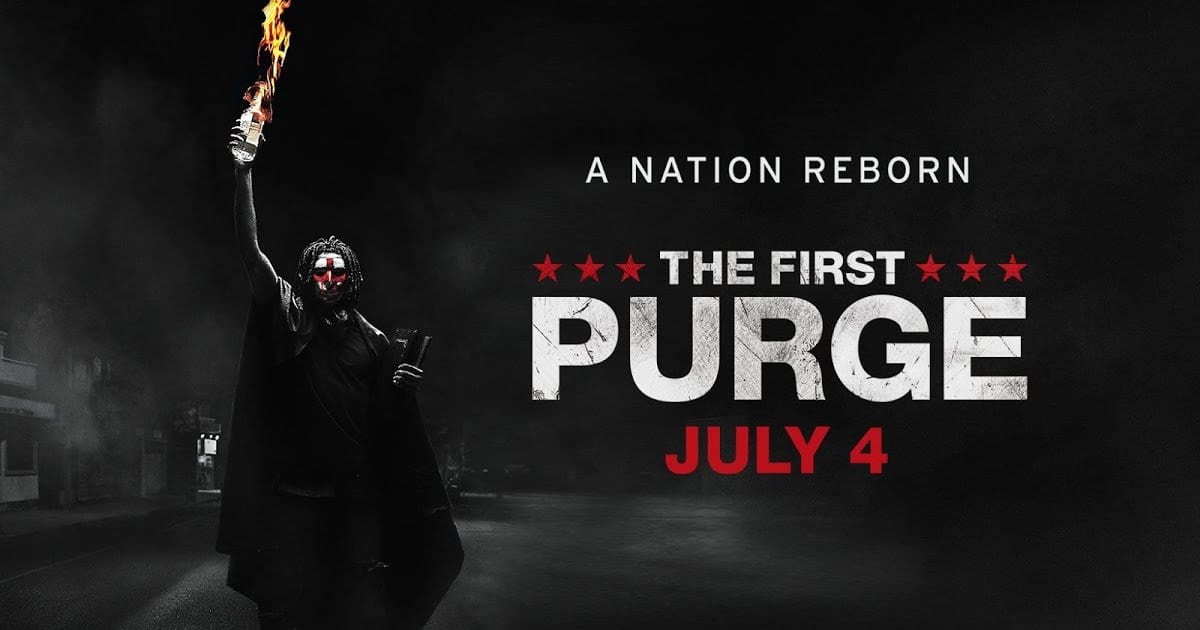 We’ve come to the fourth Purge movie.  That’s right, the FOURTH. The once amazingly conceived premise has been run into the ground due to strong profitability (and low budgets thanks to the maestro Jason Blum).  The First Purge, as it’s titled, shares a similar core to the previous films, and that’s precisely the problem…even if you like the pulpy, grisly thrills that all these movies provide.

After a scientist (Tomei) creates a psychological test that would allow people to release all their anger in return for monetary benefits, the new NFFA political party (the New Founding Fathers of America) implement the experiment in Staten Island, hoping that this test could eventually lead to widespread change in the country down the road.

But when turn-out for the experiment is less than estimated, a few public figures resort to rather unsavory means to make sure it’s a success, putting the lives of people like Dmitri (Noel), Nya (Davis), and Isaiah (Wade) at risk.

Even including The First Purge, none of the Purge movies have earned a fresh rating on Rotten Tomatoes.  Still, the franchise lives on.

Why you ask?  Look no further than box office receipts.  After all, money is the sweet, sweet elixir that keeps Hollywood on its feet.  On a $3 million budget, 2013’s The Purge grossed almost $89 million.  The sequel went on to gross about $112 million on a $9 million budget.  Then, The Purge: Election Year earned $119 million after only putting in $10 million.

Jason Blum has famously kept his budgets to a minimum, profiting to the max off of his high-concept films.  If The First Purge proves successful, this franchise will surely continue into the future (spoiler alert: a TV series is already set to premiere later this year).

One of the ways that Blumhouse keeps their production budgets down is by casting relatively unknown actors.  Or in the case of The First Purge, your recognizable actors (i.e. Marisa Tomei) just stand in front of a laughable green screen and complete their work in a few days.

But I’m always ready for an introduction to some new faces.  Luckily for me (and everyone else), Y’lan Noel appears to be quite the find.  He’s been in a few projects before The First Purge, but the latest film in this definitely his most high-profile project to date.

Noel is positioned as the drug king of his neighborhood, a kingpin with a conscience of sorts.  And while The First Purge follows a few interconnected people around Staten Island, the film is at its best when he’s onscreen.  He’s just cool, flaunting his chains and his muscles like he knows he’s the best his town has to offer.  When it comes to the grisly action that this franchise is known for these days, Noel is incredibly convincing, so much so that I’d love to see him in his own action vehicle.  We don’t have enough cool badasses in film these days.  Noel has that kind of potential moving forward.

But when hiring lesser known actors, you run the risk of adding talent that isn’t, well…talented.  That being said, in the case of The First Purge, it feels like most of the blame should fall on writer James DeMonaco and director Gerard McMurray.  The film isn’t exactly put together nicely, especially from a directing standpoint.  The film is all over the place in that regard; the actors look as if they’re in no man’s land, unsure if they’re suppose to go for all-out camp or bring sensible grit to the film.  The result is some rather flat performances that struggle to gain sympathy.

What’s even worse is the troubling characterizations that are at the forefront of The First Purge.  Most of these characters are incredibly unlikable, bordering on being irredeemable.  While I loved Y’lan Noel in the film, his character is the savior of this neighborhood.  That’s right, the man who murders and sells drugs is who we should all get behind!   I find myself having trouble with this arrangement, especially since the film doesn’t do much to distinguish his unsavory methods from those that are positioned as the even badder guys in the situation.

And for the character known as Skeletor, all I can say is…ohh no.

The real problem with The First Purge, however, is its version of political discourse.  It’s no secret that all of these Purge movies have had political undertones to them — they wear these themes proudly on their metaphorical chests.  With The First Purge, the discussion handles how the lower class feels squeezed out by politicians and their policies, especially towards minority groups.

Now, there’s definitely a worthy discussion to have with this perceived strained relationship, but there’s just one problem with its construction: it’s not a discussion.  More accurately, it’s a tantrum.  I’d compare the political subtext in The First Purge to a toddler screaming at the top of his or her lungs.  There’s no room for a genuine dialogue to take place and it repeats itself over and over again without any depth to its feelings.

Screaming that there’s a problem in the political system isn’t intelligent.  Frankly, it comes off as if The First Purge was created by people who don’t really have a strong understanding of politics but know that something is wrong from hearing the news in the background while they tend to other things in their home.  Granted, The First Purge is absurdly heightened (and by design), but it doesn’t have a kernel of wit that is applicable to the real world.

Despite Y’lan Noel’s best efforts, The First Purge is a limp retread of a franchise that sorely needed a facelift…or needed to die out altogether.  You’ve seen the stale political undertones of The First Purge in the other three films, so there’s nothing new to see here.  Realistically, this film is only for the most serious fans of the franchise, but I think many would agree with me when I say that The Purge hasn’t done enough to warrant a vanity project.

I still believe that the concept behind The Purge could work well as a film or series, but those that want to make that happen might want to think about finding another creative mind, because James DeMonaco hasn’t exactly hit a home run yet…and he’s had four chances.

Thanks for reading! What are your thoughts on The First Purge? Comment down below!

Lazy, dull, utterly ridiculous, and lacking any subtlety whatsoever. Hopefully it will be the last purge and I’ve been a huge fan of the series.

Well there’s a tv series coming, so I wouldn’t hold your breath! Lol

I’d watch a rebels vs. NFFA series or one about how the NFFA rose to power.

Maybe! That’s probably what they’d do — I don’t know what else they’d do! Lol

I’m going to go out on a limb and say nothing.

I wanna see this movie so bad!!!

I hope you get to see it soon…and you enjoy it more than I did!