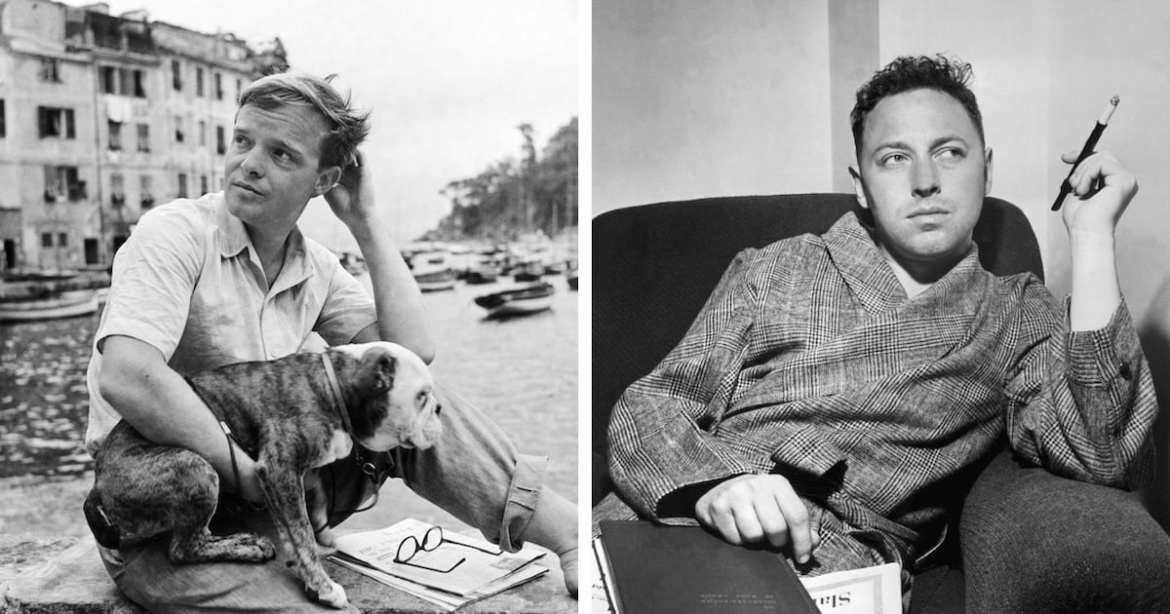 I will never forget how I felt the moment I finished reading Capote’s In Cold Blood. I was overwhelmed by sadness and disappointment, not because the book was bad, but that I was aware that it would take a long time before I would read such a masterpiece again. I couldn’t turn back time and return to the moment that I was about to read the book. I desperately wanted those words to come into my brain again. Apart from Toni Morrison’s Beloved, it was the first time a novel had such a powerful impact on me. With Tennessee Williams — the other figure of interest in An Intimate Conversation — it’s different, but that’s merely because I am more familiar with the movies based on his works than the works themselves. Director Lisa Immordino Vreeland originally wanted to make a documentary about only Truman, but I am glad that she listened to producer Mark Lee and included Tennessee as well! As An Intimate Conversation shows, there are some very interesting similarities AND differences between the two writers.

They are not only two of the most famous modern American writers, but they also had their breakthroughs at more or less the same moment — although there was a difference of almost thirteen years between the two men. On a personal level, they shared a lot too. They were friends as well as rivals; they had many common friends; they were gay; both grew up in a family plagued by alcoholism and became alcoholics themselves towards the end of their lives; they both suffered from depression; They also struggled with their development as artists and the absence of a father figure in their lives. Both men also died within a year from each other. The differences between them mainly concern their opinions on a variety of subjects, such as art, relationships, and their means of expression.

While watching the TV interviews with both writers within the documentary, I had the feeling that Tennessee was the more genuine of the two. He comes across as honest; whereas, with Truman, there is always a doubt. Is he really honest or is he saying something to please the audience? I am not going to lie, I have a bit of a weakness for Truman, probably because of his incredible wit. He himself seems to enjoy it in an almost childish way. On the other hand, Tennessee takes his time to answer the questions and goes deep into subjects such as love and friendship. You get a better insight into his mind.

Vreeland’s documentary is stunning. Thanks to the mix of TV interviews and voiceovers of Jim Parsons and Zachary Quinto reading passages from journals as Truman and Tennessee respectively, you almost feel as if the men are talking to each other and us once again. The documentary follows the chronology of their friendship and their personal and professional lives.

I was particularly overjoyed and impressed with Jim Parsons. I have always enjoyed The Big Bang Theory and Parsons in particular. For some reason, I have always imagined Truman Capote to be a naughty character. This is a quality that I could clearly hear in Parsons’ voice. Zachary Quinto embodies Tennessee with a je ne sais quoi I could best describe as “serious charm”. In general, I thought that the voicework of both actors really suited the personalities of both writers.

There were a couple of details that really surprised me. From the beginning, it is clear that Truman Capote really admired Williams’ creativity: he describes Tennessee as someone who is “always writing”. But I was shocked to learn Capote didn’t consider him to be an intelligent person. Another surprise was that when Capote was writing Breakfast at Tiffany’s, he wanted Marilyn Monroe to play the character of Holly Golightly. Although he didn’t approve of all the changes to the story, he liked Audrey Hepburn’s performance. I cannot help but wonder though what the movie would have looked like if Capote had his way!

In later years, the friendship between the two men became strained, highlighted by the publication of Unspoiled Monsters, a fictionalized memoir in which Capote satirizes Williams. The latter was not too happy with it. Shortly before William’s death, though, the two friends saw each other again at dinner in a restaurant. Williams complained that he had no true friends left and that Capote was the only one who had always truly understood him. After Willians’ death, Capote wrote an essay in tribute to him. After many health troubles, Capote died in 1984, shortly before his 60th birthday.

I loved this documentary. I have the feeling that I know Capote better and it certainly was a very good introduction into the life and work of Tennessee Williams. Kudos to Vreeland for not concentrating too much on Capote’s years as an alcoholic, but offering a well-rounded picture. Vreeland must have spent a lot of time and energy in various archives, but it pays off: there are moments that you feel the two writers are alive again.

And finally, I’m relieved that Jim Parsons has moved away from Sheldon Cooper for good.

Thank you for reading! What are your thoughts on Truman & Tennessee: An Intimate Conversation? Comment down below!

Sounds interesting. I’ll have to look for this one.