‘The Tomorrow War’ Offers a Lot of Action, but Is Let Down by Its Derivative Screenplay 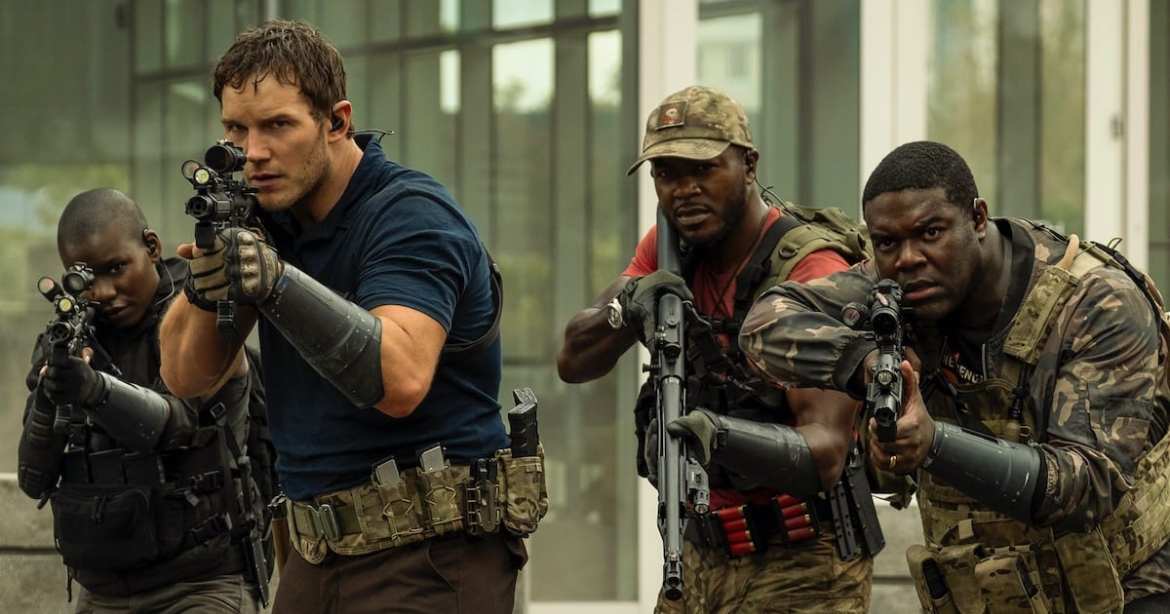 This is the time of the year when Oscar rumors are beginning to make the rounds. Let me be helpful and add some: I predict that The Tomorrow War will not win an Oscar for its screenplay and Chris Pratt will not be crowned Best Actor. Naturally, a movie about a ragtag group jumping through time to fight futuristic aliens most likely was not put into production with the hopes of awards glory, but still, could we get a movie with a better screenplay and lead performance?

Chris Pratt plays a high school teacher (his character’s name is Dan Forester, but that doesn’t matter — he’s playing a version of himself) who is enjoying a soccer match on TV with his family when suddenly, a group of futuristic soldiers emerges on the field. It turns out that they are us, and have come from the future to ask for our help. In the year 2051, Earth is being invaded by aliens and humanity is losing the war against them.

It doesn’t take long before Pratt is drafted. What follows is a ridiculously short training period, and before they realize what is happening to them, Pratt and the other civilians (an interesting mix of people from all walks of life) are sent to the battlefield, without even knowing what their enemy looks like. When they finally come across their foes, they look like a cross between the creatures from Alien and from A Quiet Place. One thing is immediately clear: these aliens regard humans as mere food.

At this point in The Tomorrow War, there have been a few exciting battle scenes, but as soon as Pratt’s character is introduced to the adult version of his daughter (played by Yvonne Strahovski), things change considerably. The action disappears to the background and we become exposed to long (way too long), cringy exchanges about heartbreak and disappointment. Unfortunately, this is not the only time that a thrilling action sequence is interrupted by a lot of blablabla. You can’t shake off the feeling that The Tomorrow War tries to please many different audiences all at once. The movie works best as a combination of sci-fi and adventure; there is no room for any psychological drama.

As mentioned above, another weak component of the movie is Chris Pratt’s lead performance. Let’s face it: it’s not the performance of the year. Henry Cavill would have been a better choice. He at least has a broader range of acting (and he is eye-candy as well). When it comes to the film’s dramatic moments, Pratt doesn’t really know how to pull them off.

But some of the effects-heavy sequences are fun to watch. The moment when the future soldiers enter the soccer stadium is really awesome. It all starts with a bright light that disorientates you. In all the chaos, we can distinguish we can see some figures moving around and then we realize they are humans. I have to admit it, my jaw fell to the floor. Another fun sequence is when Pratt and the others jump to the future for the first time; here, it’s the darkness of it all that disorientates.

And then there is the phenomenon called J.K. Simmons, an actor who can play anything in any kind of movie. Too bad we don’t see him more often here and it’s even worse when you realize what his fate is going to be. At least he has some good one-liners!

It’s a bit of a pity that none of the main characters, after seeing the future, consider making some personal changes to better themselves; there’s hardly any character growth. The lack of little touches in The Tomorrow War makes it clear that its script never totally considers the consequences of toying around with both past and present. It’s a shame that a movie that jumps back and forth between timelines doesn’t even try to play around with its own sci-fi implications.

Thank you for reading! What are your thoughts on The Tomorrow War? Comment down below!

The second part of this movie completely fell apart. How can you market and plot a movie with time travel and treat it like a discarded bike that is too small?

I’ll say this for Chris Pratt, he’s not Sam Worthington. And Worthington would have totally been the lump of wood carrying this if it was made 10 years ago.