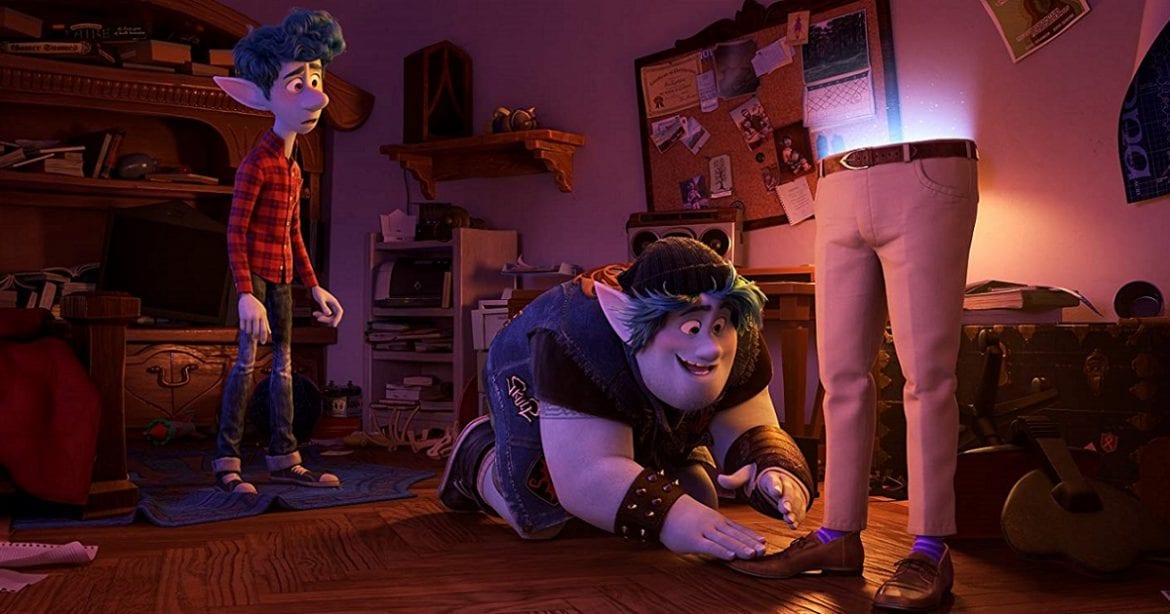 Onward, a movie I had no expectations for, but I went to see it anyway because it comes from Pixar. It turned out to be a great decision for two reasons: there’s a hilarious short featuring the Simpsons at the beginning and, more importantly, it’s great on its own right. It’s a heart-tugging film about two brothers who are on a quest for a sacred item needed to perform a spell that would bring their father back. Coming from someone who is close to his father, I teared up during the film’s final act.

We begin in a world where mystical creatures exist, but they don’t live the way you would typically expect: elves, fairies, wizards, centaurs, dragons, and other beings from mythology live harmoniously in the way most of us do now. Creatures like Centaurs, which are known for running, are using cars. Those with wings even fly via airplane. Wizards, however, are still needed because of their knowledge of magic and its use for society. But all of this changes as these creatures start using technology and leave magic behind.

Now you’re probably asking yourself, “Why is technology better than magic in this universe?” In Onward, the difficulty of learning and practicing spells becomes more challenging with each generation. It’s a great metaphor for our tendency to shift towards what’s easier and completely disregard what came before. Because of this, the magic becomes the stuff of legends, which leads us to our stars, Ian and Barley Lightfoot.

Ian and Barley are teenage elves that are raised in a suburban-like town by their mother Laurel (Julia-Louis Dreyfus). Ian (Tom Holland) is a child of the modern world who is focusing on his studies with dreams of living up to the father he’s never known. Ian is a painful introvert who is better with books than he is with people, though he strongly desires acceptance. The kind of teenager you would walk down the hallway and notice him always looking down as he walks past you.

His older brother, Barley (Chris Pratt), is a rebel who drowns himself in fantasy and lives a carefree, reckless lifestyle. While everyone sees someone who is lost in the real world, Barley is a free spirit who chooses to remember what was cool about magic. Like Peter Pan, he is the child who never grew up, which makes him the most likable character in Onward. Barley’s behavior and passion are addictive whenever he’s on the screen — he radiates with positive vibes. He’s the big brother everyone should want…unless you suffer from severe insecurity issues, like Ian.

On Ian’s sixteenth birthday, he receives a gift from his late father: a wizard’s staff and a spell that would allow someone to bring somebody back for one day. When Ian attempts the spell without any training or guidance, the spell goes horribly wrong: only the bottom half of his father reappears. Now Ian realizes that if he wants to see his father fully intact, then he has to find a way to complete the spell, and that involves going on a quest. The problem is (if I may borrow a famous line), “One does not simply go on a quest.” While Ian feels that he should be conservative with how they proceed, he relies on Barley because of his knowledge of magic.

Ian and Barley quickly clash because Ian is simply trying to resurrect his father, but Barley is living out a childhood fantasy that could be potentially dangerous. They are running towards certain dangers while also running away from their mother who isn’t willing to risk their lives. But the biggest challenge these brothers face is one of the most dangerous things in the world, the truth. In typical Pixar fashion, the brother’s quest begins to reveal certain issues they never wanted to know themselves, let alone others. People who have siblings can relate to this because let’s be honest, we all have secrets we don’t share with family members.

However, once again in typical Pixar fashion, what starts a division quickly becomes the beginning of a path towards unity. More secrets are revealed to each other and the bonds of trust strengthen the brother’s determination to complete their quest. A quest that takes Ian out of his comfort zone and strengthens his confidence. For Barley, an opportunity arises to correct a mistake that he made in his past.

Chris Pratt and Tom Holland are no strangers to each other and it’s no doubt that these two have great chemistry together. I prefer Chris Pratt’s performance, especially because of his charisma when he would start talking about dragons or magic. The way Chris Pratt performed almost made me feel as if I were back at some renaissance festival and witnessing a live performance. Tom Holland is perfectly acceptable, but it does feel like watching another Spider-Man film with Holland channeling the same nervous energy as Peter Parker and merely replacing superhero ingredients with that of high fantasy.

The animation is solid which is always expected from a Pixar film. Most of the characters were designed beautifully, but I was surprised by the main antagonist. A dragon, assigned to protect the artifact that Ian and Barley need to bring their father back. The dragon is made of stone and I was hoping for something more flesh and blood, but the dragon is still ferocious. The dragon and Ian have an epic battle you would expect to see in any medieval film that involves a legendary beast.

Watching Onward reminded me of the song “Dance with My Father” by the late, great Luther Vandross, in how he sang about how he loved his father and would give anything just to have the opportunity to see him again. Having the chance to bring someone we love back — for even just a few moments — is a beautiful, gut-wrenching idea that Onward uses to full effect, even going as far as teasing a possible sequel down the road.

Thanks for reading, and listening! What are your thoughts on Onward? Comment down below!