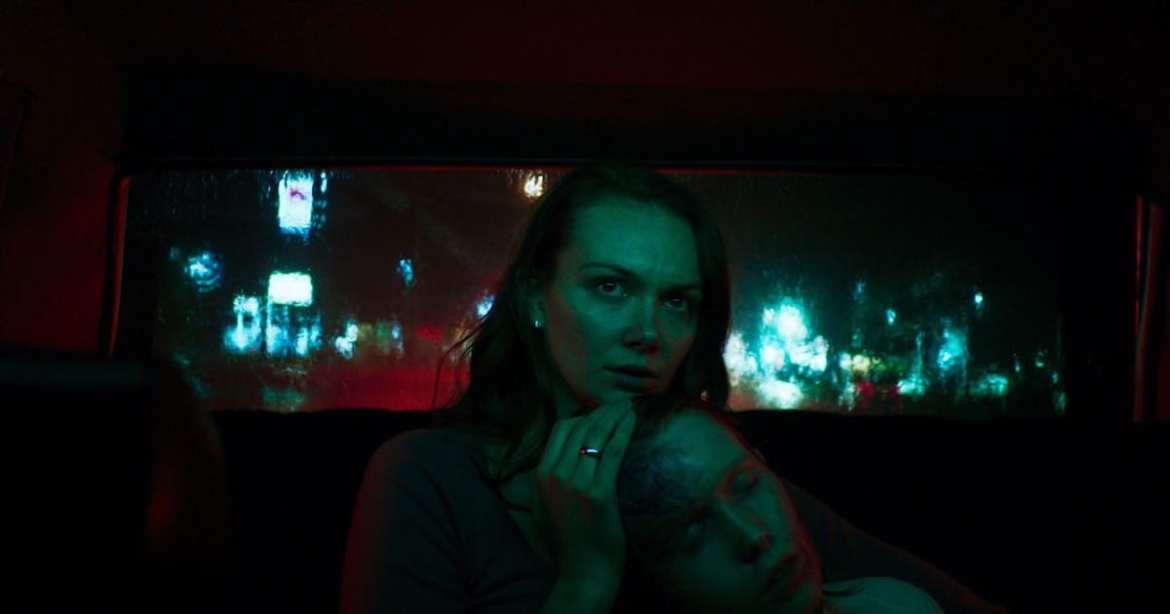 Kids. Love ’em or hate ’em, we can all agree they’re emissaries of Satan sent to destroy the Earth, amirite? Or possibly vampires. Or something that isn’t right. At least that’s the case for young mother Laura (Andi Matichak) first seen fleeing from a cult in a car through a red-lit, rain-soaked night and pleading not to give birth to the baby that is coming, ready or not.

Jump forward eight years and Laura is now settled as an elementary school teacher and caring for lovable moppet David (Luke David Blumm). Their peaceful life is threatened when Laura finds a collection of creepy strangers gathered in the sleeping David’s room. Racing for help from neighbors, she returns to the house with cops only to find no trace of a break-in. She’s interviewed by a pair of detectives, one skeptical of her story (Cranston Johnston) and one more sympathetic and supportive (Emile Hirsch). While Hirsch’s detective Paul takes a keen interest in Laura and David’s safety, there’s not much he can do for David when he starts vomiting blood and bruising horribly.

A Living Nightmare Or Just a Dream?

When David shows that the way to treat his symptoms is the consumption of human flesh and blood, things take a turn from “on the run from a cult” to The Omen. With shades of Let The Right One In, the film thankfully doesn’t spend too much time playing the “is this real?” tune. At the very least, Laura and David are disturbed, whether there’s a supernatural element or not. It doesn’t go down the route of possibly being entirely imaginary. There’s a good focus on detective Paul’s patient work following up on the situation. Whatever is going on here, it is leaving bodies behind and blood up the walls. Writer/director Ivan Kavanagh and his crew have a solid handle on the practical effects side of things and the moments of gore, when they do happen, are effective enough.

Unusually, the film feels like it was shot in chronological order. And that the makers got better as they went along. The opening 10-15 minutes (after the opening scene) are very vague about where the film is going and are overly reliant on “volume blast” jump scares. The viewer is liable to find themselves reaching for the remote control to counteract the latest explosion from the score. Which is even more irritating if all that actually happens is a door opens. However, the film seems to grow in confidence as it moves on. Leaving the cheap tricks of extremely tight angles and silence jumping to LOUD NOISE behind and moving into a more assured slow-burn dread. Once the movie has established the threads of Laura attempting to manage David’s condition and his need for blood, the steadfast police following the trail of death and the more nebulous cult that may also be chasing Laura or may only be flashbacks of earlier trauma, then it becomes a much more polished viewing experience.

Run From (Or With) the Devil

The latter stages of Son begin to resemble a chase movie. Albeit a stop/start one. Laura kills, temporarily satiating David’s symptoms, they move on, the child returning to a normal happy state as the police attempt to understand just who or what they are dealing with. Then the bleeding, the bruising, and the howling begin to ramp up again. (Be warned, the effects and Blumm’s performance make David’s suffering disturbingly visceral at times). Hovering on the edges of all this is the cult (family?) Laura is fleeing.

Does all this coalesce into a successful film? Yes and no. The influences throughout are so strong as to border on tributes. There are numerous parts where the viewer may be sitting thinking, “Ooh, it’s just like Rosemary’s Baby” or, “This is very Little Shop of Horrors”. (Son does tend to hedge its bets with the victims to keep Laura sympathetic. One drunken, woman-beating pimp is slightly less cartoonish than Steve Martin’s famous dentist, but only slightly.) And where the homages are too strong, Son suffers in comparison. That said, when it has the confidence to go its own way, it has a style that draws the viewer in and is very watchable. Maybe if had stuck to its own style throughout it could have been a cut above but as is, it’s still a solid horror film that doesn’t overstay its welcome.

Thank you for reading! What are your thoughts on Son? Comment down below!