‘Christmas Bloody Christmas’: Won’t Somebody Please Think of the Children!

Possibly the best Killer Santa movie ever made (or at least in the top three). 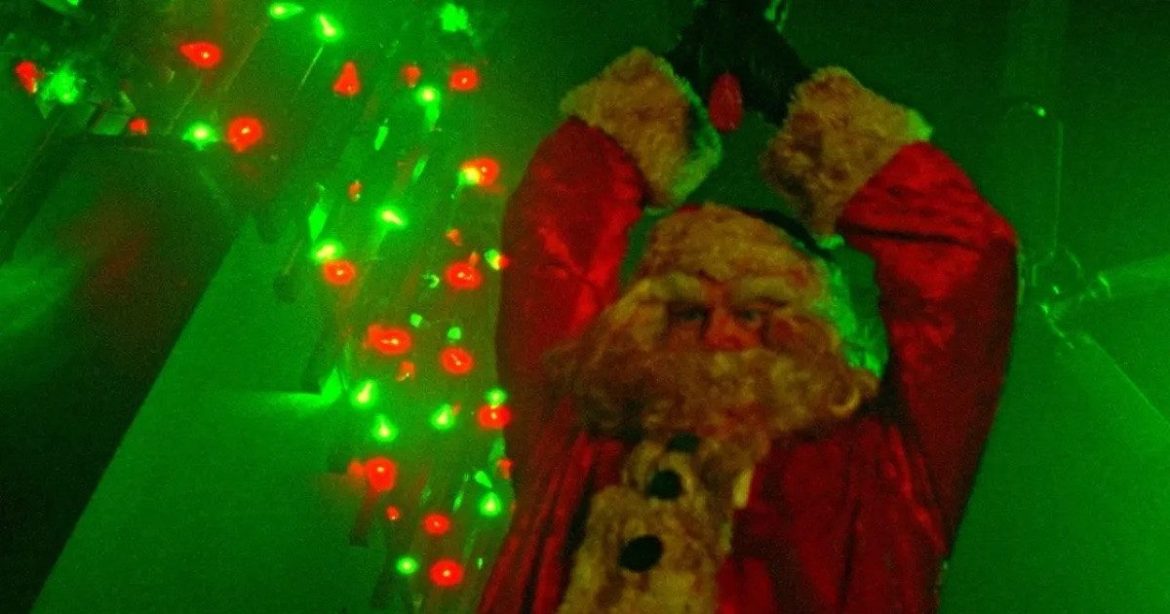 Wait, you don’t want to see that? How surprising since Tim Allen is such a funny guy.

To my mind, Joe Begos is one of the most exciting voices in genre cinema. Watching 2019’s VFW was like watching a film specifically designed for my delicate sensibilities. It had everything I would want from a midnight movie: neon-hued cinematography, veteran character actors, practical effects, and a synth score.

Christmas Bloody Christmas continues the aesthetics from VFW and its predecessor, Bliss, but with some added sleazy holiday cheer.

Taking place entirely on Christmas Eve, it follows passionate metalhead Tori (Riley Dandy) as she plans to get drunk and get laid. Her work colleague, Robbie (Sam Delich) convinces her to ditch the adulterous Tinder date she had planned to meet and hit the town with him instead.

Meanwhile, through news reports, we are informed that a particular robot Santa model, which has crowded toy stores throughout America, is being recalled due to a programming error. To be more specific, the Yuletide automatons are reverting back to their original Department of Defense programming… Wait, what? Yeah, just go with it.

Eventually, one of them awakens (played by Abraham Benrubi), grabs an axe, and starts maiming people indiscriminately. Ho ho ho!

As it must have been clear by now, the plot doesn’t really matter here. It’s essentially an amalgamation of eighties shlock; a dash of Tech Noir a la The Terminator, a little bit of Chopping Mall, and naturally, Silent Night, Deadly Night — with some inspiration taken from the evil Santa from Futurama. The plot is just an excuse to have a Robot Santa go around killing people.

First things first: yes, the action in this movie is all practical. No digital blood splatter here. Begos knows that the old way is better. Prepare to see axes plunged into prosthetic bodies and a head squashed into a gloriously pulpy mess.

Even better than that, all this action is punctuated with a glorious synth score, courtesy of Begos regular, Steve Moore. Filmed once again with 16mm, with heavy neon cinematography, Christmas Bloody Christmas becomes another glorious retro mood piece.

It does feature some of the minor issues regarding the presentation of the effects that were also noticeable in VFW. The heavy grain and neon lights sometimes make it difficult to see some of its amazing practical gore. Maybe Begos does this intentionally, wanting to recreate the feeling of watching a grindhouse film on a worn-down VHS tape. It’s not an issue that happens frequently, but I do question some of the lighting choices.

The film’s most significant issue is the dialogue. While the banter between Tori and Robbie can be fun, especially around topics like metal music and pop culture (though Tori’s opinion on the best Alien sequel is shocking, to say the least), the constant swearing through it all becomes extremely grating to listen to.

It feels like every line of dialogue from Tori needs to have at least one expletive. If you tried a drinking game with every usage of the F-word, you’ll die of alcohol poisoning within ten minutes. It makes a Rob Zombie film sound like a piece of Hallmark cinema.

Bliss had a similar issue but it was more excusable since its main character was a drug-addled artist slowly losing her mind. With more grounded characters in Christmas Bloody Christmas, it just feels like overkill. The worst of it is around the third act. We have surviving characters just screaming and cursing at each other, and although it luckily doesn’t last very long, the repetitive dialogue is a drag.

I also had issues with how certain characters react to tragedy. Though I’m not an expert on how people react while being chased by a Santa Killbot, it does feel the film could have used a breather where characters just mourn their current predicament.

Like Begos’ previous film, Christmas Bloody Christmas has a lean running time of fewer than 90 minutes. While this is generally perfect for this type of film, a minute or two could have been spent on some internal drama.

This was done so well in VFW, where even with its quick pace, the main cast mourns their fallen comrades. It makes you care more about the characters until most of them are eventually killed off.

The cast does a great job, despite the obnoxious dialogue. Dandy makes for a memorable scream queen, and her chemistry with Delich feels genuine. Begos regular, Dora Madison, doesn’t get much to do this time, though her appearance is still memorable — for reasons I can’t really spoil here.

Rob Zombie regular Jeff Daniel Phillips appears to, though not much is done with his character — underusing great actors is common with Begos, in how he heavily underused George Wendt and David Patrick Kelly in VFW.

Benrubi’s imposing figure is perfect for the murderous cybernetic Santa. Benrubi appeared previously in a brief supporting role in Begos’ Bliss, but is perfectly utilized here. Though don’t expect this Santa to make any Christmas puns like the Chapman brothers would do. There is no “punish!” or “garbage day!”

This killer Santa minces no words. He just murders people and doesn’t care whether you’re naughty or nice.

Christmas Bloody Christmas is not perfect, but if you can get past the incredibly flimsy plot and irritating dialogue, you’ll have yourself a helluva time. Whenever there’s action, whenever Robot Santa starts killing people, and the synthesizer music goes nuts, it’s an absolute blast. In the final confrontation especially we get to see some awesome animatronic goodness. It’s undoubtedly going to be essential holiday viewing for genre fanatics.

Thanks for reading! What are your thoughts on Christmas Bloody Christmas? Comment down below!

‘The Beach House’ is a Great Place to...