‘Space Jam: A New Legacy’ Is a Despicable Display of Studio Marketing 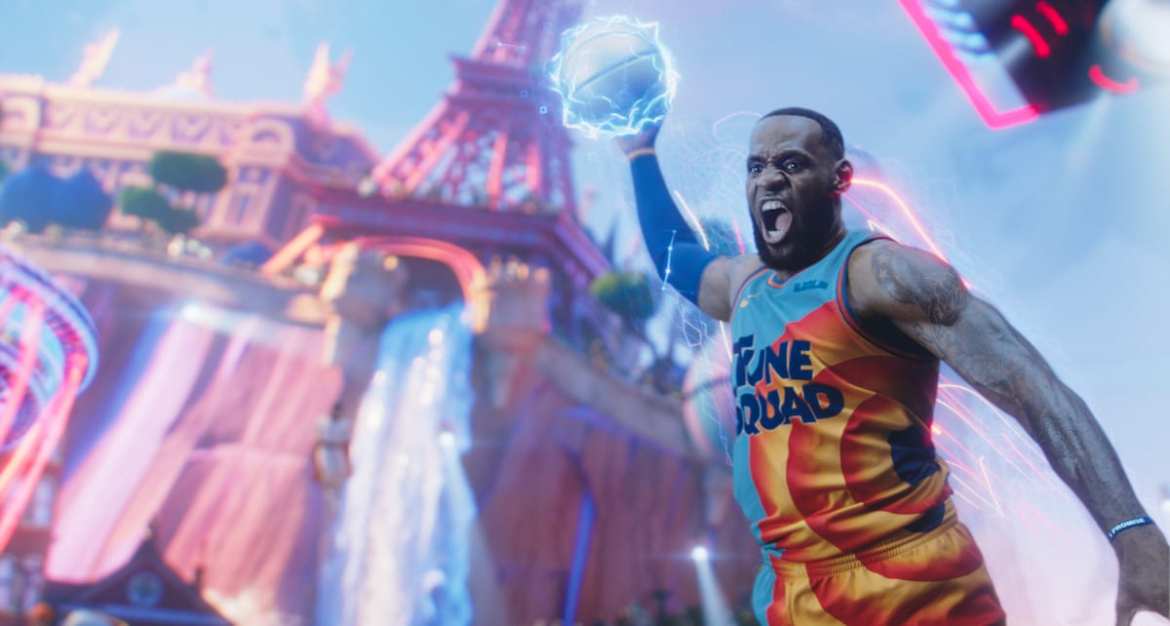 In the never-ending LeBron James-Michael Jordan debate, it always comes back to counting championships. For many, LeBron will never surpass Jordan until he at least earns his sixth NBA title. Sitting at four currently, that goal seems less and less likely as LeBron enters the twilight of his playing career. And the fact that he’s lost at all in the Finals makes the argument moot for many basketball lovers. So, he’s turned to basically everything else to try to even the score, whether it’s continuing his success at an unprecedented level well into his thirties or, now, making his very own Space Jam. But I’m here to say that the gap between LeBron and Jordan has now widened. Space Jam: A New Legacy is so bad that LeBron should have to relinquish one of his titles for even being involved.

Let’s not be fooled here: as much as people find nostalgic value in the original Space Jam, it too is an abomination. A soulless, disgusting corporate product meant to do nothing except fuel Michael Jordan’s ego and sell toys. A New Legacy is the same formula, except with an additional element of seriously, what the FUCK is going on here? Watching this movie broke my brain.

Like its predecessor, A New Legacy takes an oddly semi-biographical slant. That is, allowing the star to play a version of himself, but retcon his backstory and hire real actors to play his family members. Instead of Bronny, there’s Dom (Cedric Joe). He’s really into video games, to the point where he created his own spin on NBA Jam, DomBall. And in the grand tradition of movie overparenting, LeBron does not like that. In this world, LeBron had to give up all video games (and apparently all other sources of fun too) to become the legend he is, and he wants Dom to follow in his footsteps.

They don’t see eye to eye very often, so LeBron tries to cheer Dom up by taking him to his very important meeting with Warner Bros. executives played by… Sarah Silverman and Steven Yeun? (The crazy thing is that one of our most recent Best Actor nominees having a blink-and-you-miss-it cameo is only the 178th weirdest thing in this movie.) The duo unveils an elaborate corporate plan to digitally insert LeBron into all of the companies’ most popular franchises. If you took a drink every time someone utters “Warner Bros.”, you’d be drunk in the first fifteen minutes.

In one of LeBron’s strongest career choices outside of coming back to Cleveland, he quickly nixes the idea. But Dom LOVES it, which is great for the cunning embodiment of this algorithm, Don Cheadle’s Al G. Rhythm (I hate my life). Through his technical wizardry, he manages to lure both of them down to the server room, where he digitizes and inserts them into the ServerVerse, Warner Bros.’ collection of servers that has different planets for all its different properties. It has a planet for all of your kids’ favorite properties. There’s the DC planet, the Game of Thrones planet, the…Casablanca planet? With cameos from the Droogs, Pennywise, and tons more? C’mon, at least make your corporate pandering make some sense to the film’s target audience!

Rhythm quickly splits up LeBron and Dom, challenging LeBron to a game of DomBall while coaching up Dom to be his secret weapon for his nefarious team, the Goon Squad. 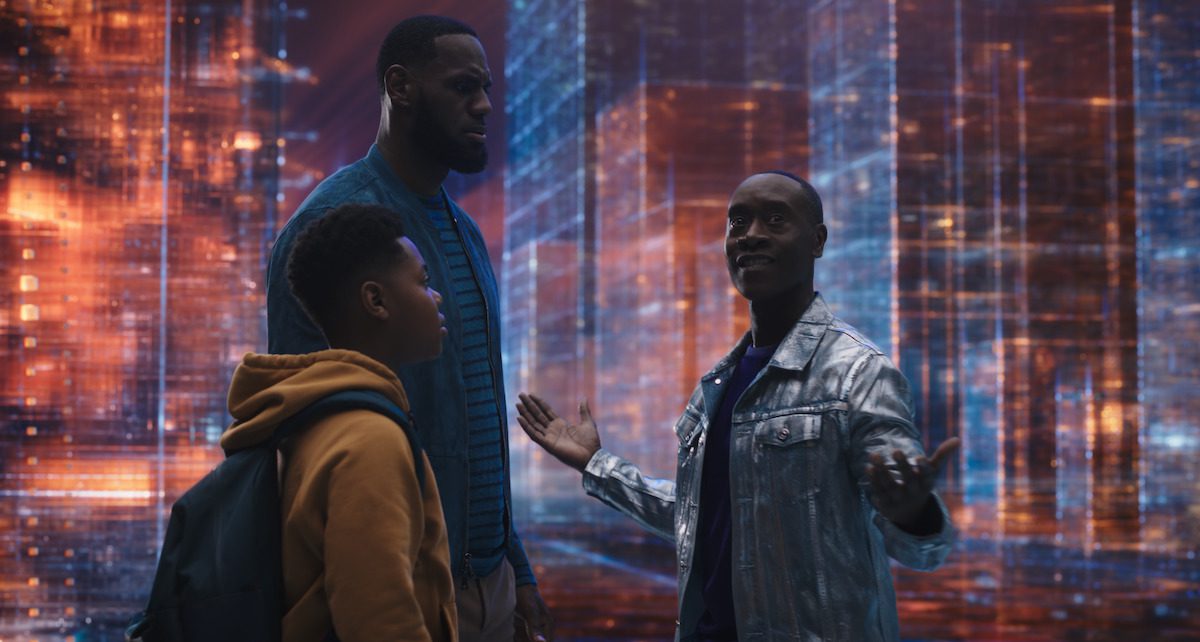 Why Does Warner Bros. So Badly Want a Connected Universe of All Its Properties???

As you might expect, Space Jam: A New Legacy has one of the more baffling synopses I can remember. The WB synergy on display is so brazen and chaotic — it speaks to the larger, more troubling relationship the studio has with properties it so desperately wants to market to the masses. There was Ready Player One, which gave the studio an in to let its notable film characters play around in the same world, but it turns into a full-on trend when you look at Warner Animation Group’s work.

Out of the nine films the animation arm has worked on, six are concerned with creating their own universes. Included are four Lego movies — The Lego Movie, The Lego Batman Movie, The Lego Ninjago Movie, and The Lego Movie 2: The Second Part — along with Scoob! and now Space Jam: A New Legacy. At least part of the fun of the Lego movies is that one of their major themes (at least in the original and its sequel) is our relationship to commercialism. In my mind, Scoob!‘s attempt to launch a Hanna-Barbera Extended Universe took the mantle from The Dark Universe for the most shameless attempt to launch a universe of films. And now, A New Legacy is nipping at its heels. I felt dirty watching this movie try desperately to string together a plot between incessant references.

At Least Don Cheadle Is Having Fun?

Horrible character name aside, at least Don Cheadle knows what he’s doing in A New Legacy. Like Jeremy Irons in Dungeons and Dragons, he’s a dignified actor chomping down on a ham sandwich. He occasionally brightens this entire ordeal and offers some fun to the film’s almost hour-long basketball game. It wouldn’t surprise me if he ended up with a Razzie nomination — you would expect as much for a character named “Al G. Rhythm” — but there’s no questioning he understood the assignment.

He’s the best part of the movie…until he turns into a CGI nightmare.

Warner Bros. Wants to Be the Star

Space Jam: A New Legacy is the kind of bad movie that makes you question your life decisions. It’s studio greed at its worst, so much so that it isn’t even fun to parse through all the strangeness within it. You could dunk on Artemis Fowl for having Josh Gad poop dirt, but A New Legacy is the movie where that kind of pleasurable mockery comes to die.

LeBron is…okay, I guess? Definitely better than other athlete performances (his cameo in Trainwreck is still iconic.) The Looney Tunes characters don’t have too many memorable moments. The actor and athlete cameos don’t make big impressions either. Warner Bros. made damn sure it was the star here — everything else recedes to the background.

The production of this $150 million eyesore sounds way more interesting. WB tapped Terence Nance to be the original director, the person behind An Oversimplification of Her Beauty, a movie that is emphatically not a project you would think would springboard someone to later direct a Space Jam reboot. Of course, Nance was let go shortly into production due to “creative differences”, and Malcolm D. Lee took over. Lee only had four days to work with his crew before filming restarted.

However, it would probably be unfair to blame Lee or any of the film’s six(!) credited screenwriters. This is the making of a studio once again eating its own tail.

Thank you for reading! What are your thoughts on Space Jam: A New Legacy? Comment down below!

Not touching this one. I enjoy WB, but I have no respect for the self proclaimed “king James”

I’ll be interested to see what this does outside the US. Michael Jordan… well, my mum knew who Michael Jordan was. Even Europeans with no interest in basketball knew the shoe guy. LeBron is a huge basketball star but he doesn’t transcend the sport like Jordan or Tiger Woods did.

The Warrens Are Back in Action in ‘The...