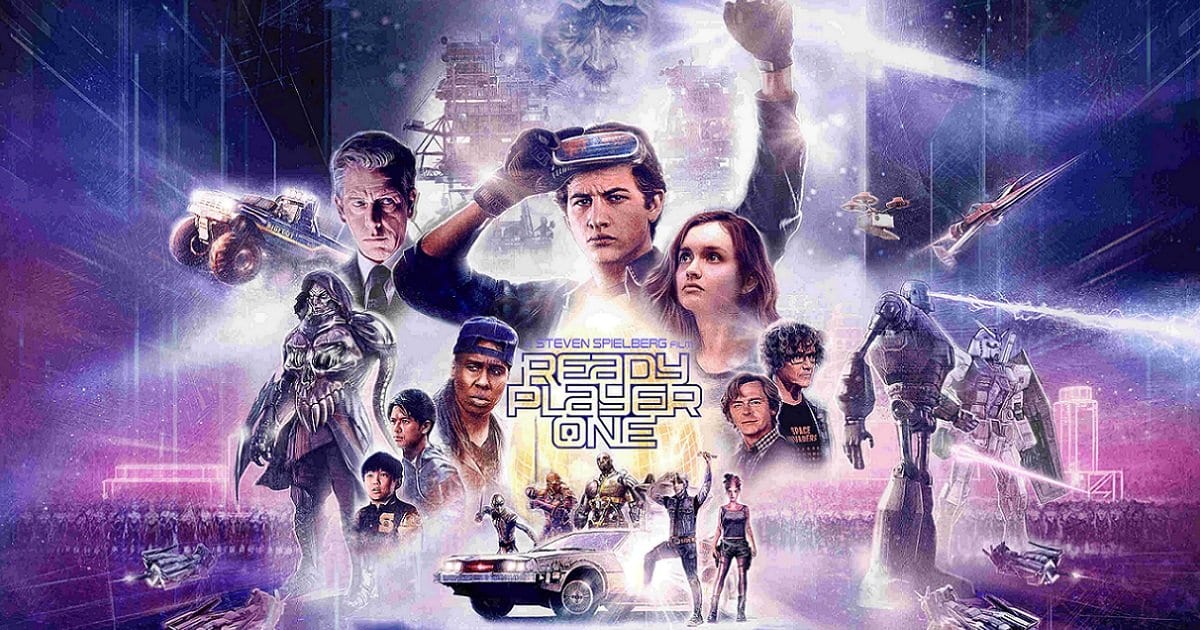 Steven Spielberg has already created such an amazing legacy for himself as a director that others are now writing material that is one big tribute to his past work, making it even more fun when Spielberg actually gets to direct such love letters to his former self.  His adaptation of Ernest Cline’s Ready Player One is not only an ode to his past blockbusters — it’s the holy grail.  The following review will be spoiler free. 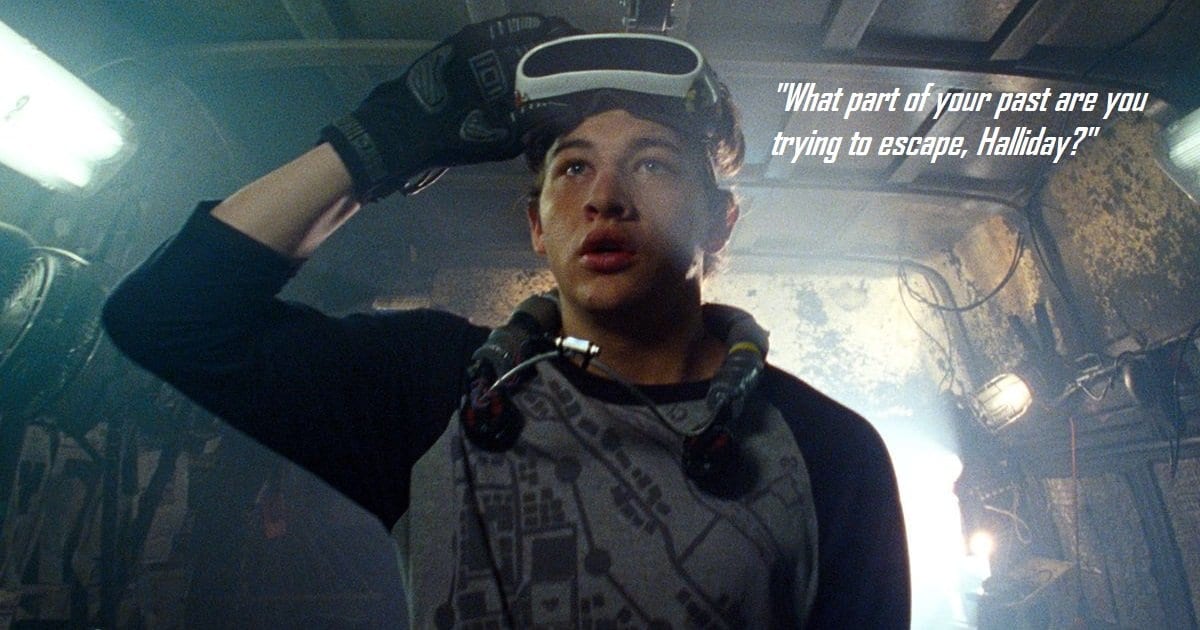 In the year 2045, the world revolves around one piece of technology: the Oasis.  The virtual reality world where you can be or do anything you want is one of the world’s largest economic resources, and some even lose themselves within it.

However, upon his death, Oasis creator James Halliday (Rylance) left behind an immense fortune: the Oasis itself.  He created quests within the Oasis itself — three seemingly impossible tasks.  The announcement puts everyone at odds, pitting two unlikely heroes (Sheridan and Cooke) against a massive corporation led by Nolan Sorento (Mendelsohn) for the ownership of the Oasis — and the world.

Warner Bros. had a suspicion that Ready Player One might prove itself as a stand-out blockbuster adventure, acquiring the film rights to Ernest Cline’s creation before it was even finished.  Spielberg quickly signed onto the project soon after, making Ready Player One his first action-fantasy film since 2011’s The Adventures of Tintin (one could make the argument that The BFG holds that distinction, but it sounds much more important the way I said it, doesn’t it?).

It’s always nice to see Spielberg return to the style of film that made him so popular in the first place.  After all, Jaws essentially created the idea of a “summer blockbuster” back in 1975.

Regardless of my less than thorough research on the topic, it’s no secret that Spielberg has transitioned towards more prestige films, and that trend will continue with the release of The Kidnapping of Edgardo Mortara this coming awards season.  Blockbuster filmmaking can take a lot out of a person.  I can’t fault the living legend for wanting to move towards grounded stories as he reaches the twilight of his career.  Spielberg called Ready Player One his most difficult movie since Saving Private Ryan, citing his endless hours of work with the renowned ILM on the film’s visual effects as the main culprit for the distinction.

While he has Indiana Jones 5 in the works, you never know when Spielberg might stop making larger budget films — so enjoy it while you can.

Ready Player One is Visually Incredible, and We Have Spielberg to Thank for It

When you have Spielberg and ILM putting in countless hours of work on the visual effects, you better believe that the film is a visual treat.  Realistically, Ready Player One is 70% animated, using mostly motion-capture performances from its talented cast to tell this sprawling epic.  It might take film’s longest opening voice-over ever recorded to introduce this world (seriously, it’s that lengthy), but what follows is a world of endless possibilities.

We’re still not quite there in terms of making fully digital characters appear life-like, but Ready Player One‘s world skirts passed this issue, having most of the movie play out like a cut scene from the latest video game.  Spielberg has full license to do whatever he wants in this completely malleable world, creating a spectacle that is as distinct as it is thorough.  Many will find enjoyment in all the blatantly obvious references to memorable 80’s figures (I’ll be honest, I cracked a smile the first time the Iron Giant appeared).  However, the true amazing qualities of Ready Player One is the expansive universe itself.  The film jumps from place to place, adding entertaining puzzle pieces to create a fun picture in the end.

Ready Player One showcases some of the most lively camera work from Spielberg in years.  It whizzes around as new characters fly into the ever-growing canvas, zooming into the teeth of a battle.  Yes, most of the shots onscreen are completely digital, but Spielberg captures each moment with such kinetic energy and whimsy that most moments are more fun than they should have been.  No shot is ever boring, utilizing some of Spielberg’s most famous filming techniques. Contains an Earnest Sense of Fun and Magic

From almost fifty years of filmmaking, it’s clear that Spielberg loves injected themes of humanism into his movies — it’s one of the reasons that we love his films so much.

Ready Player One has a similar idea at its core, injecting heart in the narrative to keep it from becoming a hollow and lifeless recontexualization of once popular cultural touchstones.  Like many times before, Spielberg enacts the popular cinematic idea of pitting an entire evil army against a small band of rebels, immediately placing the lead characters in a state of goodwill with the audience.  Big, evil corporations suck, and they’re an easy sell as the antagonist of a blockbuster.

The latest Spielberg blockbuster creates a delightful cat and mouse game between these two factions, making a story where our leads must solve convoluted clues in a race against time.  It’s an admittedly sweet story that does more than focus on nostalgia — even if nostalgia is a massive part of the movie.  That patented Spielberg magic is all over this film, bringing a bigger smile to your face than it probably should.  The music swells in combination with sweeping shots that create awe and wonder.  With Spielberg involved, Ready Player One evokes more of a response on a visceral level than it would under any other director.

Ready Player One Becomes a Bit Exhausting and Empty

Tye Sheridan and Olivia Cooke are great, upcoming actors to watch out for into the future.  They both provide sweet performances and create a charming partnership in the battle of the Oasis.  The problem is that their relationship takes a back seat to the spectacle, which also becomes exhausting after a while.

With a runtime of 140 minutes, Ready Player One needed to spend more of that time developing the center relationship.  Instead, RPO turns to an overload of effects that might turn some numb to the movie by the time the third act comes around.

It certainly comes down to personal opinion, but the film never reaches painful recreation of 80’s figures — it definitely gets very close.  Still, there’s a clear imbalance between effects and interpersonal relationships that leaves some of the themes rather cold.

At the center of it all is a discussion of nerd culture, and it’s representation is stuck in the past (not to mention never fully realized).  Characters hide behind their avatars, afraid of showing their true selves.  While there’s a good nugget of an idea to play with there, Spielberg never goes deep enough with it.  You can’t just put a birthmark on the beautiful Olivia Cooke and expect her to become some horrible monstrosity that needs to stay hidden.  In that regard, Ready Player One feels at times like it’s creating a human element within the story because it has to, not because it wants to.

Spielberg once again shows why he’s such a great director, filming every scene with an energetic touch that adds to the fascination behind the endless possibilities in the Oasis.  We might be reaching our breaking point for 80’s nostalgia, but Spielberg adds enough fun and whimsy to keep the continuous references from becoming shallow and gratuitous.

At 140 minutes, Ready Player One definitely starts to feel its length — and somewhat thin characters don’t help the cause — but there’s something for everyone in this film (by design, of course), and it’s always delightful to watch a movie that just wants to entertain above everything else.

Thanks for reading!  What are your thoughts on Ready Player One?  Comment down below!

I don’t know if Spielberg was trying to return to the style that made him popular, but for me, the magic wasn’t there. Yes, there was some cool scenes like The Shining sequence but overall, I didn’t love it. I was never able to get fully invested in the characters or what was happening to them because there was no time for it. Sorrento is a smarter and more threatening character in the book, here he was merely an older business man who barely knew what he was doing. There was no intensity of suspense going into the challenges, I didn’t feel invested in that either. I thought it was okay, but not a movie I need to see again.

I totally see where you are coming from! Neither of the main characters were well fleshed out, it’s just one of those scenarios where the scenery and world spoke to me on a purely visceral level. I definitely won’t think about it much in a few months!

Great review! I’ve seen the film twice now and even though it has a few issues, it’s one of the best cinema experiences I’ve had in a while.

It definitely is one of the better in theater experiences people could have these days. I’d like to see it in IMAX if possible

I saw it in INAX the second time. I would say it’s definitely worth the ticket price. I picked up on a lot more of the Easter eggs.

I definitely get what you mean about the 80s references but I liked it. It reminded me of why so many people look back on the 80s in wonderment. There was a lot happening in the film, perhaps too much which seemed to overshadow the relationship between the two protagonists somewhat. I also enjoyed the differences between Sheridan and Cooke’s characters – well, their differences and their similarities. Both characters looking for something in the Oasis that they could never find, finally finding it in each other outside of the Oasis. That was a nice touch. I’ve never felt this excited for a Spielberg film in a long while. That’s a sure indication to me that the return of Spielberg was way overdue.

I definitely agree. It was a little messy, but Spielberg blockbusters are just a different breed!