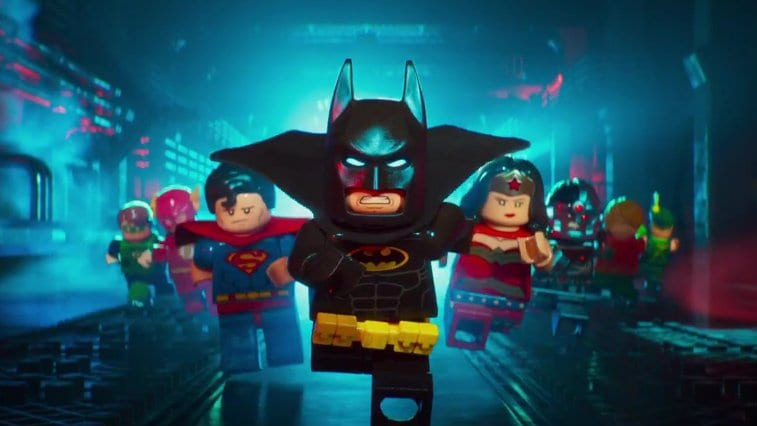 After the smashing success of The Lego Movie, the bricks are back with the next animated take on the Dark Knight, The Lego Batman Movie!  Previously seen in The Lego Movie, Warner Bros. felt that the Lego version of Batman was liked enough to get his very own movie.  But was this movie worth making?  I rushed out to the theater to find the answer to that question.  The following review will be spoiler free.

The Lego Batman Movie is directed by Chris McKay and contains solid voice actors such as Will Arnett as the Caped Crusader along with Rosario Dawson as Barbara Gordon, Zach Galifianakis as The Joker, Michael Cera as Robin, and Ralph Fiennes as Alfred.

We see Batman as the superstar of Gotham, everyone loves him and he certainly loves himself.  However, Batman is very much a loner who pushes away everyone he has a relationship with, including the Joker.  After accidentally adopting Dick Grayson, Batman works to foil the Joker who has concocted a brand new, never before seen scheme to terrorize Batman and all of Gotham.

In my humble opinion, The Lego Movie was a rousing success when it hit theaters in 2014.  There’s something about the animation style of the Legos that are just inherent silly and fun.  That combined with a funny, surprisingly touching story, The Lego Movie worked on all fronts.  It showed that Lego may be another avenue for animation to spread its wings in the coming years.

What most people loved most about The Lego Movie was Batman voiced by Will Arnett.  Coming off of the very serious and brooding Dark Knight trilogy, the Lego version of Batman was the best spoof you could ask for of the historic character.  He had so many little bits (my favorite of which was when he exclaimed “first try!” after throwing numerous batarangs at a button) that became instant crowd favorites upon the movie’s release in theaters.  Needless to say I had very high hopes for what Lego Batman could offer in his very own movie.

After what felt like a lightning quick time in the theater, I’m happy to announce that The Lego Batman Movie left me with a great big smile on my face.

One thing about this movie that you’ll figure out right away is its hyper-frenetic pace.  You could easily watch The Lego Batman Movie multiple times and pick up new little jokes or reference that you didn’t notice the first time.  The movie does a really nice job of continuing this pace without feeling rushed or messy, making the movie as a whole just fly by with fun scene after fun scene.  The creative team knew exactly when to give certain scenes some extra room to breath in order to drive the point home.  This solid understanding of scene structure from Chris McKay gives The Lego Batman Movie its spoof-filled enjoyment.

This spoof nature comes from a deep understanding of the Batman character from Chris McKay along with the writers.  Surprisingly, not since Christopher Nolan‘s Batman Begins and The Dark Knight have we gotten a better understanding Batman’s inner fears as well as his relationships with other characters.  His relationship with the Joker in the movie, while hilarious, points to the feeling that Nolan’s The Dark Knight displayed about the two characters needing each other to be fulfilled.  The movie may be zany (sometimes to the movie’s detriment), but there’s a surprising amount of depth and touching moments, similar to the The Lego Movie that will have both Batman fans and critics squealing with glee.

That being said, combined with those touching moments is a ton of hilarity.  The Lego Batman Movie takes it upon itself to make fun of the entire filmography of Batman.  Everything from the Adam West Batman to last year’s Batman V Superman: Dawn of Justice is parodied with hilariously results.  The movie is so clever how it sprinkles in references without feeling annoying or overdone.  Literally nothing is off limits to be made fun of by Batman and the rest of the blocky characters.

The Lego Batman Movie is also expertly cast, leading to some really great banter between characters.  A special shout out goes to Michael Cera as Robin and Zach Galifianakis as the Joker.  Cera, with his manboy voice that we’ve all come to love, makes Robin the most adorable character in the movie.  It creates a really funny dichotomy with Will Arnett’s overly groveling Batman voice.  Moreover, we’ve all seen Galifianakis go over the top and be borderline annoying.  However, he keeps in check and turns into a great iteration of the iconic character by the end of the movie.  I probably enjoy his version of the Joker more than Jared Leto’s in last year’s Suicide Squad.

I’d hate to be labeled a “DC hater,” but this may be the best DC film since the Nolan Batman movies.  If this movie does well at the box office (which it presumably will), I think we’re destined for a Lego universe full of our favorite DC heroes for years to come.  And I say bring it on!  I can’t get enough of these Lego flicks.  The Lego Batman Movie gets an A.  Go out and support this movie rather than that soft-core pornographic “film” masquerading as an actual movie that will stay unnamed. Thanks for reading!  Have you seen The Lego Batman Movie?  Comment down below with your thoughts!

Hey! Absolutely loved reading this review, I’ve been wanting to see this movie for a while but was never sure if it would live up to the original. Also: my friend runs a movie reviewing blog (he’s got some good stuff and I’m not just saying that because he’s my friend!) if you get a minute you should check him out (www.moviewatch735.wordpress.com)

It’s definitely worth your time!

I enjoyed this review, you highlighted several things here which I found hilarious; despite the fact that I came away from the movie with lots of negative thoughts about it. I loved batman in the lego movie, but I don’t think he did very well in this movie alone. But it made for a brilliant spoof and I did find myself laughing at several points in this film.

I could definitely see where the absurdity of the film could leave you wanting more. I guess it just comes down to personal preference in the end!

Brilliantly bonkers film! Just posted mine and I don’t think writing a review has made me smile so much just thinking about a film in some time haha! It’s not DC-hating it’s just true!

You’re so right! They’ve been divisive to say the least, and they sure haven’t been the laugh out loud blast that the Lego Batman movie was!

To be fair, I think I chuckled once in Dawn of Justice but the words: ‘lighten up’ come to mind! A blast indeed!

Great Review’s Come Check Out Some Of Ours!
http://www.nowthatsamoviereview.com

Thank you for not pretending 50 shades is a legitimate production, like so many other critics are.

Thank you for your service.

I watched The Lego Movie and liked it to quite an extent. I guess I’d like to watch this Lego movie too. After all, Lego has been a huge part of my childhood and its Batman we’re talking about; it’s like taking two good things and putting them together to create something awesome. (See what I did there?) :P

Lol. I totally agree, I loved Legos as a kid so these new movies are sort of an extension of my childhood that allow me to enjoy Legos as an adult lol

Child Stars Who Never Made It as Adult...