‘Artemis Fowl’ is Yet Another Non-Marvel, Live-Action Dud from Disney 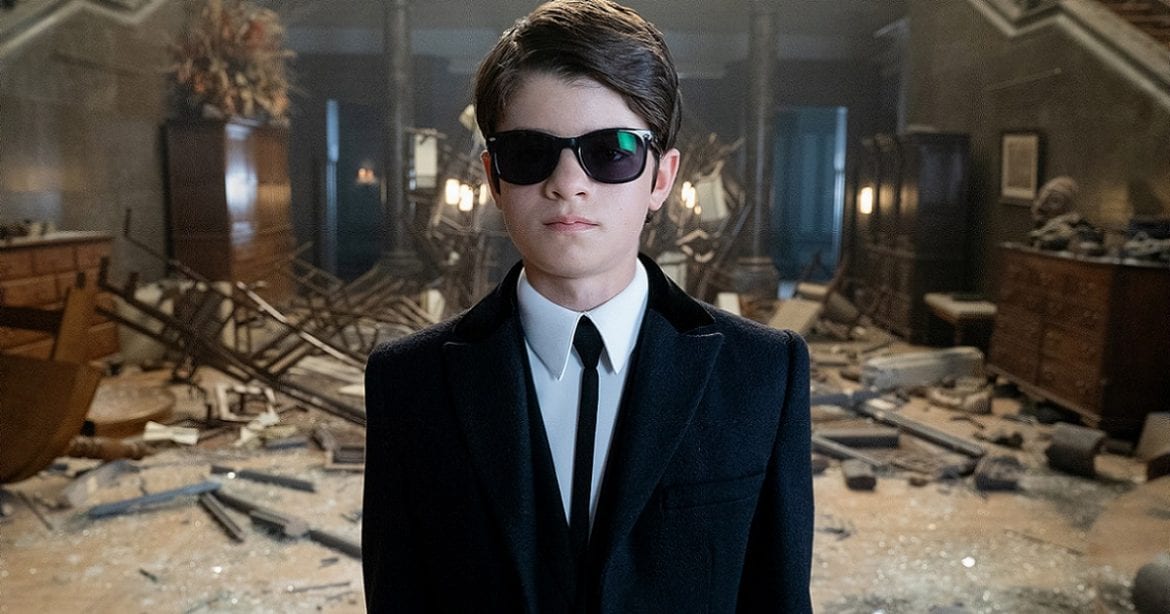 Five sittings. It took me five different sittings to finish Disney’s Artemis Fowl, a mere 94-minute movie including the entirety of the end credits. Not exactly a ringing endorsement for what was supposed to become the first leg in an expansive universe of stories based on Eoin Colfer’s best-selling series of books.

In just a few short minutes, it becomes clear Artemis Fowl is the kind of film that was so royally messed with through years of pre-production, production, and post-production that it’s nearly impossible to blame anything but the ever-growing corporation behind it. Disney has doubled, tripled, and quadrupled down on returning to their own intellectual properties while purchasing other studios outright and returning to those properties as well. As we’ve seen time and time again, this makes a lot of sense financially for the time being — just look at some of the returns on investment Disney has reaped in the last five years.

But there’s also a downside to all this IP-mining, one that is drawn out mostly by necessity: every time Disney tries to reinvent one of their stories or adapt a new one, it almost always ends badly. Disney has blundered its in-house, live-action productions for years now, shoving YA tropes, ghastly CGI, and baffling characterizations into a blender without a lid and spewing it everywhere. Artemis Fowl is just the latest example.

Artemis Fowl was squarely in “development hell” for years, optioned to Miramax (a Disney subsidiary) in 2000 under the guidance of Harvey Weinstein (yikes). Little progress was made until 2015, when Kenneth Branagh signed on to work on the project following the success of his live-action Cinderella earlier that year.

After balancing Branagh’s schedule with the likes of Murder on the Orient Express and other titles, Artemis Fowl finally got to filming in 2018, finishing principal photography that summer. The first trailer followed shortly after.

Fast forward to this very moment, and Artemis Fowl was unceremoniously dumped on Disney+ after multiple shifts in its release date. While Disney or the trades never announced official reshoots, some retinkering clearly occurred. Even the thumbnail for the movie’s teaser trailer (above) shows a character played by Hong Chau, a character who is not in the final cut of the movie. There are glimpses of other scenes in the trailer that do not appear in the final product as well.

From what has been reported at the time of writing, it appears much was done to make Artemis Fowl a more likable character, which diverts from the source material considerably. Many other changes were made to character dynamics and plot to fit this vision, which I’m sure angered fans of the books. (Full disclosure, I haven’t read a single page of an Artemis Fowl book.)

Regardless of the behind-the-scenes specifics, the result is one of the more butchered films of the last decade.

To answer my own question, no, no I do not! But the movie tried its very best with approximately 75 different framing devices (a rough count).

So that you can have any idea of what is going on in Artemis Fowl, Josh Gad’s character Mulch Diggums (lol) recounts the story to law enforcement in what is his best impersonation of Space Cop’s gruff voice. He explains how Artemis’ father, Artemis Sr. (Colin Farrell), was kidnapped by a mysterious hooded figure, who’s official character name is “Shadowy Female Figure“, although it is assumed the figure is a very poor attempt at the famous book villain Opal Koboi. (Great work, Disney!) This figure tells Artemis Jr. he has three days to find a MacGuffin with unspeakable powers called the Acolus.

There’s also a legion of elves led by Judi Dench who maybe possibly perhaps kinda sorta want the Acolus too, or there may be some backstabbing occurring as the reason they’re getting involved in the first place — it’s difficult to tell. Oh, and Mulch Diggums also eats dirt and poops it out as he burrows into the ground in one scene. I didn’t care for that.

At every turn, Artemis Fowl is doing whatever it can to help you understand it. Characters repeat important plot information within the same scene, and Mulch Diggums is always waiting in the wings to once again explain how brilliant Artemis Jr. is. Ultimately, none of it is very helpful. 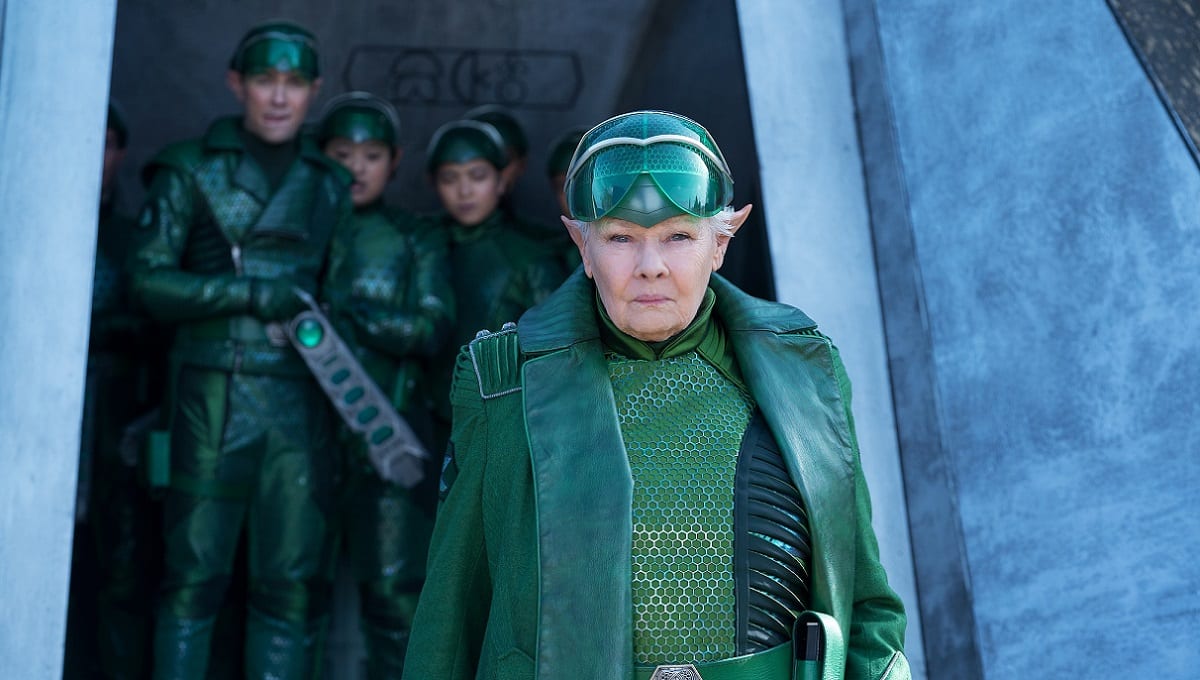 A studio botching a beloved series of eight expansive books with a 90-minute movie appearing to have gone through multiple script changes, reshoots, and a paper shredder? Where have I heard this before?

Because my brain is very strange, I immediately thought of Sony’s The Dark Tower while trying to sift through this splat of elves, fairies, Josh Gad’s David Bowie joke, and alternative Irish history. There are actually many similarities between the two cursed productions, including a child actor who is getting older and younger throughout the movie due to reshoots.

There’s clearly a lot of lore baked into both these movies, but for whatever reason, all the interesting minutiae is cut out, leaving us all with a 90-minute, watered-down product that will only anger fans and confuse commonfolk like me. At least The Dark Tower (kind of) functioned as a movie with characters and a three-act structure and the occasional bizarrely interesting moment. Artemis Fowl, on the other hand, is totally lost.

Disney auditioned well over one thousand kids to play the role of Artemis Fowl before landing on Ferdia Shaw. It would appear Disney quickly had buyer’s remorse from the way the movie tries desperately to cut around him in every scene. Sometimes, Shaw’s lines are entirely ADR’ed; instead, you merely see the back of his head as the other character reacts to his dialogue. Quickly, you can tell Shaw isn’t very comfortable. At his best, he appears very wooden; at his worst, you’ll cringe at his line delivery. (I winced as he shouted out “MY DAD!” while watching news of Artemis Sr.’s kidnapping on TV.)

I can only imagine how difficult it might be for a first-time child actor to step on the set of a $150+ million movie and act across from Colin Farrell and Judi Dench. It’s hard enough for kid actors as it is. I don’t love dunking on child actors, so I won’t do that here. Once again, I blame this horrible production for clearly never putting Shaw in a position to succeed. He has no grasp on this character, mostly because no one else does either. Fowl’s personality appears to shift from scene to scene, most likely brought on by Branagh’s attempt to make the character more likable. Quite honestly, Fowl doesn’t do much in the film; he mostly stands around as random, CGI-animated things happen around him.

Look, Artemis Fowl will not sink Disney. Endgame made the GDP of many small countries at the box office. Even some of their excruciatingly bad remakes were insanely profitable. But, when you strip away Marvel, Star Wars, and their animation work, here are the movies they have released since 2017 through Walt Disney Studios:

Beauty and the Beast

Pirates of the Caribbean: Dead Men Tell No Tales

A Wrinkle in Time

The Nutcracker and the Four Realms

Lady and the Tramp

The best-reviewed movie of the group? That would be Togo sitting at a crisp 91% Rotten Tomatoes score. It’s also one of the smallest budgeted movies of the bunch. The rest average out to a combined score of about 54%, with a few major bombs in the lot. Personally, I don’t consider any of the non-Togo movies on this list worthwhile at all.

While Disney is undeniably successful, they need Marvel, Star Wars, and their animated works to remain successful. (Although, outside of The Last Jedi and three-fourths of The Force Awakens, I wouldn’t say the Disney Star Wars films are “successful.”) They don’t have a backup plan; Marvel and Star Wars are in slightly precarious positions after Endgame and The Rise of Skywalker. Sooner or later, the lack of creativity will catch up to them. Maybe that takes 20 or 30 years, but interest in IP is cyclical, and it will happen unless Disney figures out a way to shepherd new properties.

The good news? It can’t get much worse than Artemis Fowl.

Thank you for reading! What are your thoughts on Artemis Fowl? Comment down below!

[…] the film opens, the audience is introduced to Colin Farrell’s character, Richard. As the lead scientist for this unnamed mission, Richard quickly decides to […]

I loved the books so much, so I admit I was curious about the film. But when I saw that Judi Dench was playing a gender bent version of a male character whose very male-ness is essential to a “father figure” relationship with one of the main characters, I knew I was going to be disappointed. I don’t know that I have the heart to bother watching it.

I wasn’t aware of that change! Yeah, my guess is you’ll only be disappointed. Try spending that 94 minutes towards something useful instead, like, actually watching a good movie lol ;)

Ah, such a bummer to read. I enjoyed the book series and was hoping for a decent film presentation. Oh, well.

Yeah, a serious bummer! I could only really comment on the film itself being that I’m lazy and don’t read as much as I should ;) but it seems like people who read the books hate this movie even MORE! So maybe it would be wise to stay away altogether lol!