‘Jakob’s Wife’: ‘Til Undeath Do Us Part?

The 80s style horror renaissance continues apace with this cheap and cheerful chiller. 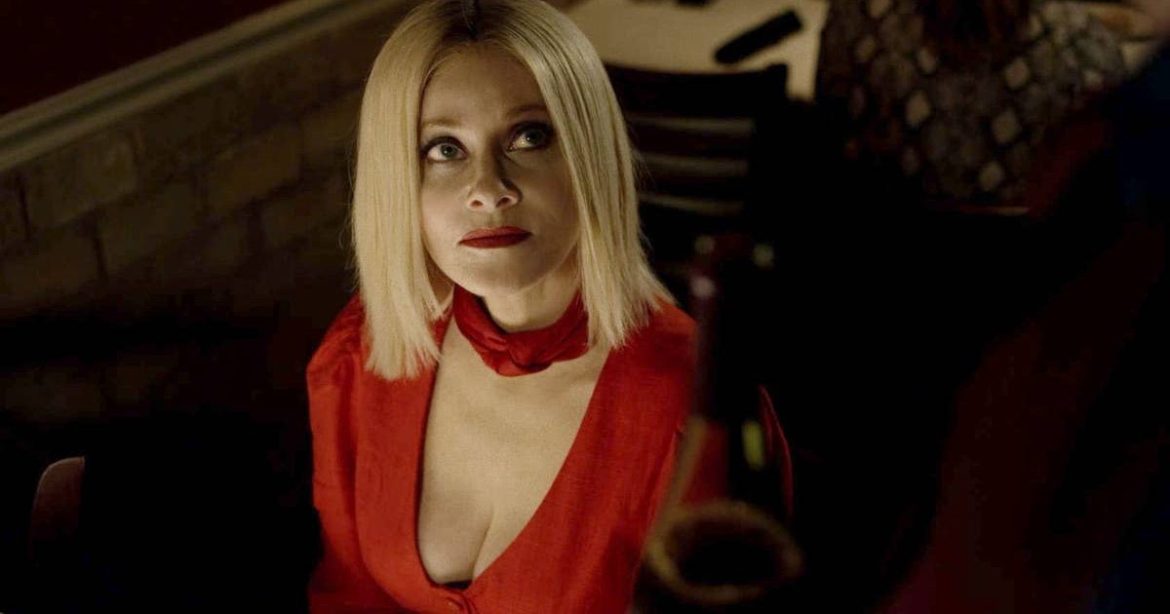 Anne (Barbara Crampton) lives in Small Town, USA, and has been married to minister Jakob (Larry Fessenden) for 30 years. It’s clear in that time her life has shrunk so she’s gone from being a hinted at “free spirit” to the dutiful pastor’s wife, only seen as an addendum to a marriage, not a person in her own right.

Jakob is smugly complacent as the town’s spiritual go-to man. He’s clearly comfortable in the rut, with a devoted congregation and a wife who’s become more of a cook and maid than a partner.

The arrival in town of an old flame, Tom (Robert Rusler) starts to awaken Anne’s need for more than the quiet routine of the humdrum everyday. That humdrum is blown away completely when Tom’s renovation of an old church disturbs an ancient evil (isn’t it always the way with these things?) resulting in Anne being bitten by a vampire.

Fangs For The Memories*

Now, many people might see becoming a vampire as a bad thing. For Anne though, the new energy and strength she has seem more like waking up after a long period of sleepwalking through life. Horror veteran Crampton brings Anne into the forefront of the frame, taking over the screen and making even a trip to the supermarket look dangerously glamorous. This is the Anne she had forgotten over the decades of married life.

For Jakob, it might be a confusing turn of events but intriguingly, not an entirely unwelcome one. The writers are just as interested in the drama of relationship dynamics as the drama of creatures of the night and it’s this that makes Jakob’s Wife such an absorbing watch. Larry Fessenden, like Crampton, is a decades-long veteran and imbues Jakob with a layered, realistic personality. It’s clear he does love Anne, he just took everything for granted and stopped working on the marriage.  As the pair set out on a vampire hunting mission to track down “The Master” (The Nun‘s Bonnie Aarons) who turned Anne, it’s clear that this is a learning experience for both of them. The contrast is that Anne is learning she’s stronger than she thought and Jakob is learning he’s not as powerful as decades of being a mid-sized fish in a small pond may have lead him to believe.

The film lets both of these discoveries become exciting to the leads. Lesser films would have kept Jakob as an oblivious blowhard but the film gives him more growth than that. It could also have been tempting for Anne’s journey to be purely empowerment but there are some fun overreaches and stumbles with her newfound powers that recall the titular women of The Witches Of Eastwick. The midsection of Anne and Jakob struggling with being amateur Vampire Queen and Vampire Hunter is a fun comedy/horror stretch that humanizes the characters well. This gives some stakes for the end third that moves into straight(er) horror as they hone in The Master.

There’s strong support from the likes of Angelie Simone as one of Jakob’s congregation, and CM Punk is definitely more on the John Cena end of the wrestler-turned-actor scale than the Hulk Hogan one, as a small-town sheriff with a sudden uptick of murder on his hands.

Director Travis Stevens makes a good job of balancing creeping dread and jump scares alongside some great splatter-filled practical effects. (There are some ropey effects in a couple of places to be fair. Particularly with some unconvincing rats in an early scene, but the low budget is mostly skilfully deployed) Jakob’s Wife nicely recalls the 80s bloodfests of Crampton’s early career like Re-Animator or Chopping Mall. If you’re partial to that kind of horror this is definitely worth your time.

*I wish I didn’t have to use such a terrible pun but it was unavoidable I’m afraid.

Thank you for reading! What are your thoughts on Jakob’s Wife? Comment down below!

I really liked this movie. Its gruesome and has some pretty funny moments. I like the idea of how it explores the ever changing process of marriage.