Thankfully, the Suicide Squad is no longer brought to you by Hot Topic. 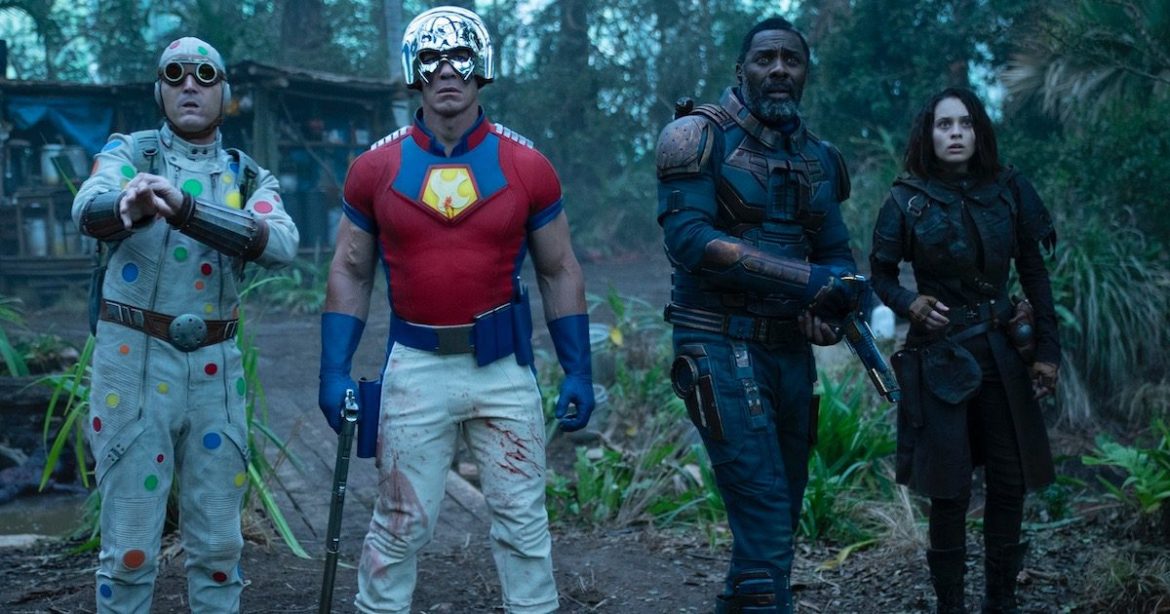 Cast your minds back five years ago to August of 2016. After two successive movies of superhero allies fighting each other over clashing ideologies with Batman v Superman: Dawn of Justice and Captain America: Civil War, the prospect of a comic book movie centered around a rag-tag group of villains reluctantly fighting for the greater good was incredibly enticing. Oh, but how foolish we were to get duped by some great trailers that were supposedly so good that the people who cut said trailer would be brought on to edit the whole movie. Needless to say, David Ayer’s Suicide Squad was an unmitigated disaster of a film that was so inexplicably desperate to be liked. From the obnoxious classic rock soundtrack, the faux punk Hot Topic aesthetic, the cringeworthy attempts at humor, the ludicrously overblown stakes, to whatever the hell Jared Leto’s portrayal of the Joker was meant to be, the film is essentially a microcosm of everything wrong with contemporary blockbuster filmmaking.

Suicide Squad was so clearly meant to be the DCEU’s response to the surprise success of Marvel’s Guardians of the Galaxy. But Warner Bros. said, ‘if you can’t beat them, hire them’ and brought onboard James Gunn, the man whose tone and style they were trying to emulate in the first place to helm the sequel/soft reboot of this eccentric gang of violent misfits. While James Gunn ignores the advice of Sean Parker in The Social Network by opting to not drop the ‘the’, The Suicide Squad firmly distinguishes itself through much more than just that three-letter article.

Once again, DC’s rogues’ gallery of obscure and second-rate antagonists locked up in Belle Reve Prison are rounded up by Amanda Waller (Viola Davis) to be sent on shady, top-secret missions for the government in exchange for clemency or time off their sentence should they survive. This time, their mission should they choose to accept it (the bombs implanted in their necks have chosen for them) is to infiltrate the fictional South American island nation of Corto Maltese and destroy a research facility housing the nefarious Project Starfish and apprehend its mad creator known as the Thinker (Peter Capaldi with a dozen Lite-Brite pegs glued to his head).

Returning to the squad is Harley Quinn (Margot Robbie in her third appearance as the now-iconic character), Colonel Rick Flag (Joel Kinnaman), and Captain Boomerang (Jai Courtney) among a plethora of new cannon fodder at Amanda Waller’s disposal. Idris Elba’s Bloodsport is a deadly assassin with a heart of gold and an intense case of musophobia; John Cena’s overly patriotic and bloodthirsty brute with the rather ironic moniker of Peacemaker; a woman with a magic Playstation Move controller that can summons hoards of rats; Nathan Fillion as a man who can detach his limbs from his body; a man with an inter-dimensional virus and severe mother issues that can shoot deadly energy-filled polka dots out of his hands; and a giant shark-human hybrid voiced by Sylvester Stallone. (Gunn clearly has a thing for meathead action stars playing big, dumb, lovable CGI characters.) 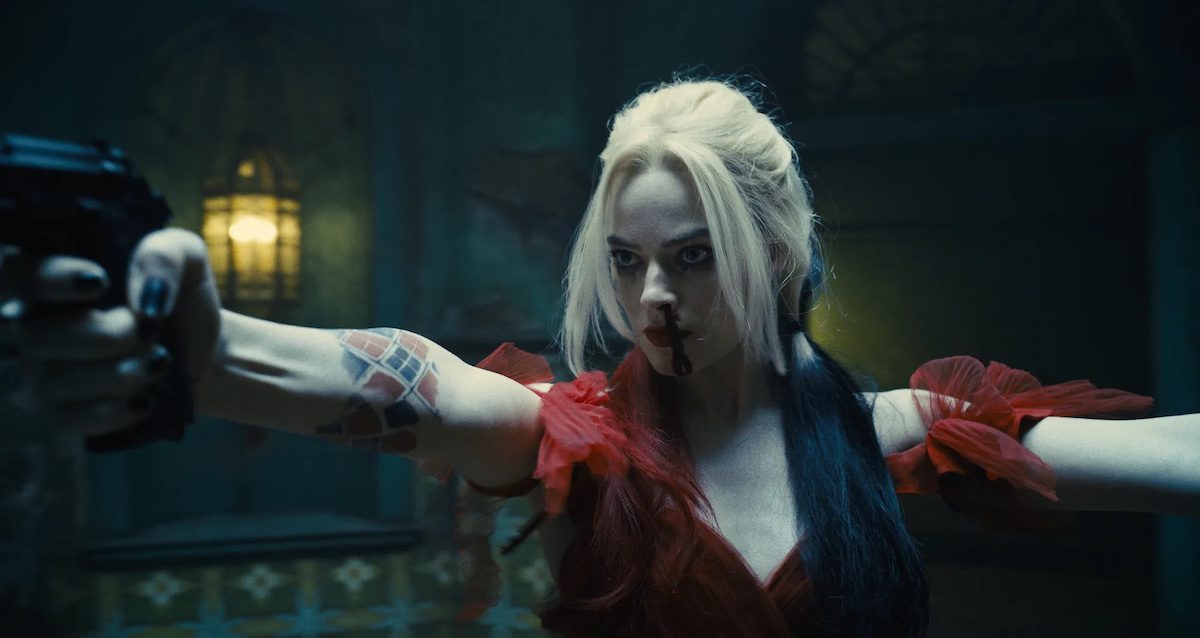 With a bigger cast, the promise of a higher body count, and all the blood, guts, and profanity that comes with the R rating, The Suicide Squad delivers on what audiences were craving the first time around. The best of Gunn’s filmmaking sensibilities are boisterously on display here as his perverse sense of humor paired with these despicable characters elevates everything to a heightened level of goofiness and vulgarity. The film’s stakes are still too extreme for these sorts of characters to be dealing with, but the outlandish ridiculousness of the third act where a giant alien starfish and its army of face-hugging offspring terrorizes Corto Maltese is equal to if not greater than the crazy register the whole movie has been operating on. Gunn’s Troma roots have well and truly permeated into his Hollywood work and The Suicide Squad is where they shine brightest. The violence is so comically excessive, there’s a sequence where Bloodsport and Peacemaker accidentally slaughter an entire camp of freedom fighters and Gunn is somehow able to make this absolutely hysterical. His understanding of how trashy and silly what he’s making is and owning it means the film can pull tricky comedic moments like this off with aplomb.

The Suicide Squad’s irreverent and in-your-face attitude doesn’t mean that it does not care about its characters, even if the majority of them may as well have an expiration date stamped on their forehead the moment they walk on screen. Whereas most of the characters’ backstories in the previous film were nothing more than tacked-on afterthoughts, The Suicide Squad handles them more gracefully with some added humor and some surprising nuggets of emotional depth. Ratcatcher II (Daniela Melchoir) is a Pied Piper-esque figure whose rough upbringing living on the streets with her father (a bizarre, yet effective cameo by Taika Waititi) gave her a purpose through her connection with the rats. The aforementioned Polka-Dot Man (David Dastmalchian) was the result of a botched experiment from his mother as a child to make him a superhero and is still haunted by her visage everywhere he looks. Harley Quinn follows up her own arc from Birds of Prey, establishing her own independence and agency after she’s separated from the rest of the team early on, all culminating in a fantastic prison escape sequence set to the tune of Louis Prima’s Just a Gigalo where Harley gleefully guns down dozens of prison guards and sees them bleed cartoon birds and flowers. Gunn expresses some genuine humanity in his group of expendable human targets, but is still able to find humor at the characters’ expense that while occasionally mean-spirited is never disrespectful toward them.

It’s silly, it’s vulgar, it’s also a little abrasive, but The Suicide Squad is the course correction that DC needed for these characters. It has the self-awareness of just how insane the film is and has a ridiculous amount of fun with it, without spraining an eyelid from constantly winking at the audience. That is what separates DC from Marvel in their recent output; they have proven they aren’t afraid to get weird and James Gunn proudly lets that freak flag fly.

Thank you for reading! What are your thoughts on The Suicide Squad? Comment down below!

She has a big wand with a ball at the end of it that lights up. PlayStation Move was what my mind immediately went to.

I wanted to like “Suicide Squad.” I’m not finished it yet, and there’ve been three sittings so far. This is unheard of for me with a movie. I love Margot Robbie and yes, Jared Leto’s Joker is atrocious. What’s us with the teeth? What’s really ruining it for me, however, is the truly atrocious editing. The movie has zero flow. I hate it when you want to like movies but can’t. Still, I will check out the sequel based on the review 🙂

Is ‘Love and Monsters’ One of the Biggest...