Shockingly, 'Cowboys & Aliens' has many examples of cringey dialogue to highlight here. 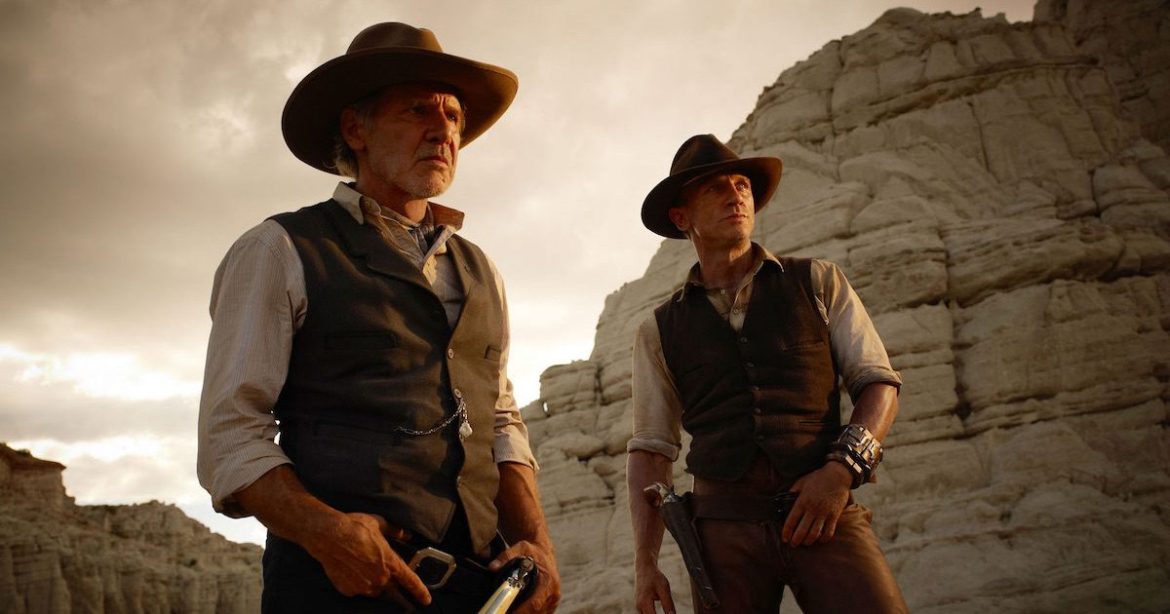 When reading about Cowboys & Aliens, you would think it was perhaps one of the most ridiculous movies made in 2011. Then again, watching it may make you think that, too. Yet, it’s one of my favorite sci-fi films.

It falls short in a few places, though. Mainly, its dialogue is awful. I don’t know if I expected anything more from a movie where cowboys and aliens fight each other with pistols and extraterrestrial weapons. It’s overall just a dumb, fun movie that you don’t have to take too seriously, which is probably why I do love it so much, even if I also love to make fun of it. Let me take you through just a few of my most favorite lines.

“They took my wife.”

Out of context, this doesn’t sound like a particularly horrendous line, but you need to understand that this line is the funniest thing when Sam Rockwell says it as Doc. This is just after the aliens have attacked the town and kidnapped about half the population, including Doc’s wife.

First of all, talk about an understatement. His wife wasn’t just taken — she was yanked off the ground by some gnarly-looking mechanical arms. Secondly, EVERYONE HAD SOMEONE TAKEN, DOC. Way to state the obvious, my dude.

The line is pathetic juxtaposed against the more heroic figures of Daniel Craig’s Jake Lonergan and Harrison Ford’s Woodrow Dolarhyde actually venturing to investigate the deadly aliens. Sam Rockwell’s a good actor, so I can’t imagine that this is anything but a bland line from the screenwriters.

Daniel Craig is not great at American accents. At least, American accents that don’t have an exaggerated southern drawl to them. His specialty is dropping his voice low enough that you don’t notice the slight poshness of British in there. The badness of his accent plays into how ridiculous some of his dialogue is.

In Cowboys & Aliens, Jake Lonergan is a tough outlaw who isn’t fazed by much, even after losing most of his memory from an alien abduction. This line, spoken after he and Ella (Olivia Wilde) have just escaped another alien attack, seems like something a child would say. It does get across the child-like wonder that cowboys probably would have felt while flying — something completely foreign to them — but it doesn’t fit his character at all.

This is practically the only crack in the tough-guy façade we ever see. Every other interaction he has is covered in bravado and lacking in emotion. This one line really doesn’t cut it for his character.

I love how historical movies (faux-historical in this case) love to refer to penises as peckers. It truly puts me in the moment.

The preacher Meacham (Clancy Brown) says this to Doc when he’s teaching him to shoot a gun. Then Doc complains some more because that’s all he does in this movie and proceeds to shoot horribly.

I like that this line highlights that the preacher is still a pretty gritty guy. I also like how he berates Doc for his bad shooting because I, too, hate Doc’s character. Glad to see that my hatred is shared.

Every line in Cowboys & Aliens is either an understatement or just really bland like this one. Jake says this when he meets Meacham for the first time after breaking into his house. Meacham then follows up that statement with questions about who he is, to which Jake responds “I don’t know.” Riveting conversation, boys.

This line goes hand-in-hand with the “We were flying” line from earlier. Jake isn’t a man of many words, so it fits his character, but the bluntness with which he says each line is hilarious. There’s very little emotion in any of his dialogue and so lines like this that should have some level of pain behind them are just spoken with a blank face and no intonation whatsoever. I’ve seen you use emotions, Mr. Craig. Use them now.

Not sure what I expected from a movie that stuffed every action motif possible into one film, though. When you shove aliens, cowboys, naked women, and Indians into one long action montage, you have to make some sacrifices.

“I always dreamed of having a son like you.”

Woodrow Dolarhyde sucks. He’s a jerk to his son (maybe rightfully so), he’s racist, and he’s violent. At some point, a person needs to stop blaming their immoral traits on their rough past and take responsibility for them. Unfortunately, Dolarhyde has not reached that point yet, choosing to blame his roughness on his depressing Civil War past.

The problem is, he’s even rude and racist to Nat, his adopted Indian son. That’s why this line is such a punch in the gut. It’s spoken by Dolarhyde as he cradles a dying Nat in his arms. Nat remarks that he always dreamed of riding into battle with Dolarhyde, a dream fulfilled only at the close of his life. Dolarhyde responds with this hollow line.

But he was your son! You didn’t have to dream of having a son like him when you basically adopted the kid yourself. And you treated him like dirt! You don’t get to say this line because you had the chance to make him your son and you squandered it because of your racism and hate. It’s an attempt at a touching moment that falls very short.

Thank you for reading! What are your thoughts on Cowboys & Aliens? Comment down below!

Interesting take. Been working on similar takes from movies.

“Olivia, your acting career is really going to go places. You’ve made the jump from TV to mega budget movies. And there’s two in a row coming out! Yep, with ‘Cowboys and Aliens’ and Tron 2 in the bag, what could go wrong? “