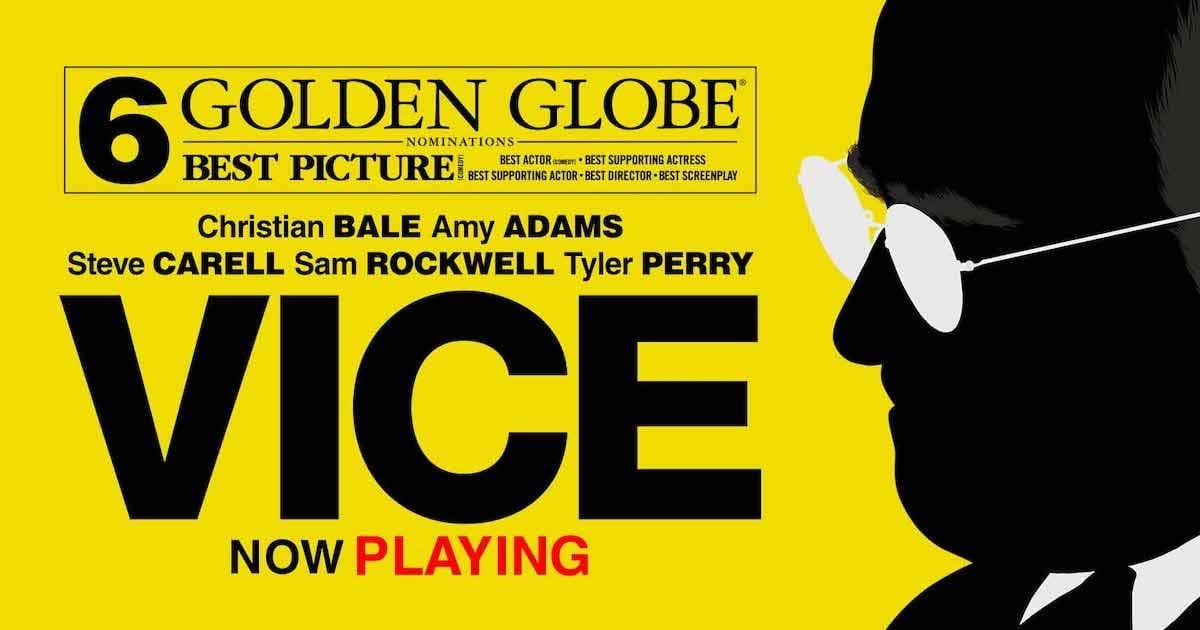 The director of Anchorman and Step Brothers made a movie about Dick Cheney. It’s quite a step away from his start, but Adam McKay follows up 2015’s The Big Short with Vice. With Steve Carell at his side once more, McKay takes a stab at uncovering the life and liberties of the former Vice President. In the same vein of The Big Short, McKay is once again refusing to pull any punches while delivering his latest political statement.

Dick Cheney (Bale) doesn’t have much direction in life. At the behest of losing his fiancé, Lynne (Adams), Dick decides to enter the political arena. Interning in Washington D.C., Cheney quickly comes under the wing of Donald Rumsfeld (Carell), a loose-canon member of the Nixon Administration. The film follows Cheney as he navigates his way through the political agenda, eventually becoming running mate to George W. Bush (Rockwell).

Once Bush is elected, Cheney restructures the Vice Presidency in a way never seen before. With the advent of 9/11 and the Second Gulf War, Cheney navigates himself and the U.S. into precarious waters with potentially limitless gains or losses. But how justified is Cheney in his actions? What did he say and do behind closed doors? Who was he really looking to benefit the most? Adam McKay uses Vice to answer all of these questions, or at least to ask them menacingly.

I lived through these events. 9/11 and the War on Terror are the most earth-shattering events of my childhood, so the core subject material is very familiar. For most Americans, the background should be pretty much basic knowledge. The scandal surrounding the War on Terror and Cheney’s role in it, however, are not as commonly known. While the film takes a fair amount of creative liberty with the finer details, the core of it remains true to the textbook. 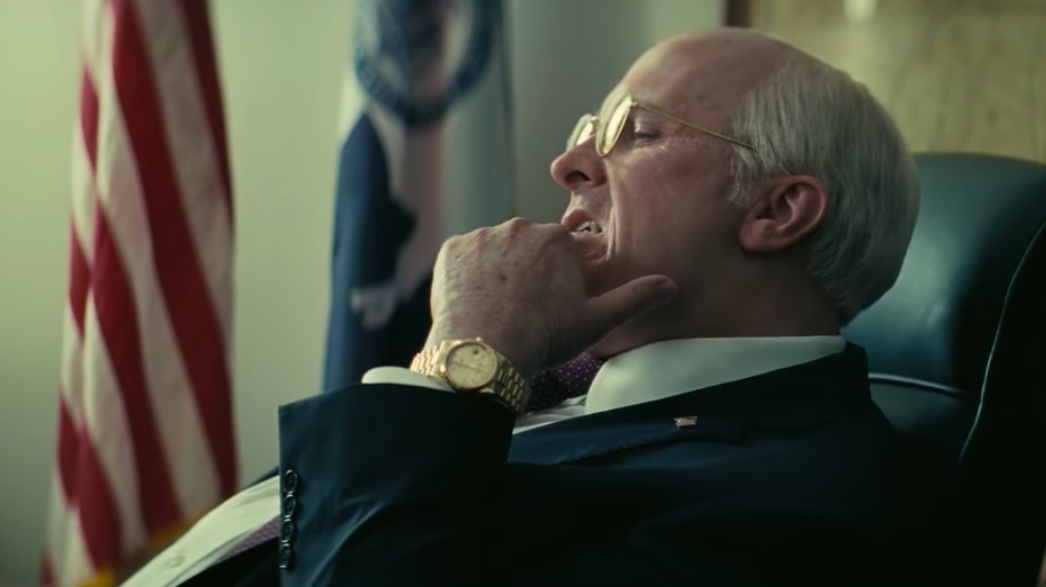 Before diving into the film itself, it feels important to talk about what Christian Bale did to prepare for the role. The actor is known for his commitment to weight transformation in his film roles, and Vice is no exception. Not only did the actor shave his head and bleach his eyebrows, but Bale reportedly gained forty pounds for the role. Coupled with his dense study of Cheney’s mannerisms, Bale metamorphosed into the character.

While I doubt any doctor would recommend gaining that much unhealthy weight in a short span of time, props to Bale for giving the role 100%. I’d wager he had a lot more fun gaining 40lbs for Vice than he did losing 60lbs for The Machinist.

Does Dick Cheney Have a Soul?

While I can’t claim to be an expert on Dick Cheney, there are some obvious liberties taken with the character. While the film tries to excuse these liberties via comic relief, it doesn’t let them off the hook entirely. In any “based on a true story” film, there are going to be liberties taken to fill in knowledge gaps or private conversations. This doesn’t mean that it is inherently bad when Vice takes these same liberties. However, Director Adam McKay’s deep hatred of Dick Cheney leaves an unpleasant musk over both the character and the film.

The most glaring issue with this film is that Dick Cheney doesn’t feel like a real human, despite the fantastic performances of Christian Bale and Amy Adams. This is where McKay’s bias comes into play. Right from the film’s get-go, Dick Cheney is made out to be like the scum of the Earth. The film makes it appear that this guy does almost nothing but take advantage of the system and look for ways to undermine the American people.

While I’m sure all politicians are guilty of this at one time or another, they are also still human. Dick Cheney, is also still a human being. Human beings have emotion, they feel sadness, anger, guilt, and fear. Some feel it less than others, and some hide their emotions better, but all humans feel them to some degree. But Vice gives Cheney little room to emote, and by the time some humanity is brought to the character, the movie has spent so long telling you that he’s a monster that the reality of the Vice President feels lost.

This film will try to tell you that it’s as accurate as possible and that it is factual, not biased. However, Adam McKay’s deep hatred of Cheney and his legacy causes the film to trip over itself a little bit. Subtlety goes out the window as the director presents one potential side of what happened and then tries to force feed that viewpoint to the audience. McKay uses a clever narrative structure and a healthy amount of meta discussion to try to distract from the palpability of opinion in a “factual” film.

I am not taking a stance on whether McKay’s viewpoint is correct or incorrect, but his personal bias is placed before the plot, narrative, or characters themselves. While McKay is not physically or verbally present in the film, the director lurks at the edge of each scene interjecting heavily into what the audience should be feeling or thinking.

When Adam McKay isn’t stepping all over himself, Vice works beautifully. The performances are all inspired and well-done. In particular, it’s easy to forget that the real George W. Bush and Dick Cheney aren’t actually in the film. Christian Bale and Sam Rockwell’s performances are incredibly spot on, despite McKay’s personal biases found in the dialogue. While the characters suffer script-wise, the actors and actresses bring them to the screen immaculately.

The film also has a very unique biopic style that makes it stand out from most of its film equivalents. Adam McKay’s particular comedic style functions really well in the terms of the films narrative. By blending meta humor and fourth-wall breaking within the context of a “real-life” story, McKay keeps the audience engaged and entertained throughout.

This film is really well-done. However, it is greatly set back by the director’s intended message. Rather than letting Cheney’s life play out in the more than capable hands of Christian Bale, Adam McKay relies too heavily on his own voice to support his own personal biases and beliefs. Regardless of whether these beliefs are fact or fiction, they heavily disrupt the flow of the film.

The performances are inspired, the story is larger than life, and Vice manages to stick out amid the current storm of December blockbusters. While it doesn’t quite hold up to The Big Short, Vice ensures that Adam McKay has a future in politically charged biopics. The director doesn’t quite have the commentary craft mastered to the same level as Jordan Peele, Boots Riley, or Spike Lee, but he’s definitely carving his own niche within that market.

Thank you for reading! What are you thoughts on Vice? Comment down below!

[…] write an article on it. It was only after I started watching the movie that I realized this was not The Machinist (2004) and I was going to be pretty […]

[…] to validate my thought process, where we see type A female protagonist Anna, played by the lovely Amy Adams, fall in love with the easy-going Declan, played by the equally lovely Matthew Goode (who am I […]

[…] documentary and narrative directors (including Morgan Spurlock, Steve James, Catherine Hardwicke, Adam McKay) who were commissioned by Paul Allen’s Vulcan Productions to make a short film for the We the […]

I’ve seen it and can say the firsr hour is great while the other half not so much. Good review, although I did get confused when you mentioned Spike Lee as an example to strive for given his more-so obvious political bias in his latest pic.

I think Cheney and funny is an impossible combo, like peanut butter and sarin. But I’ll give it a try.

Timely review. We’d heard that Vice wasn’t worth seeing, but others said it was very funny. I’d started believing that political views by viewer and director was shaping people’s impression. I like the nuances and insights your review provides. Definitely going to try to see it this week. Cheers