‘The Mortuary Collection’ Is at Once Horrifying and Adorable 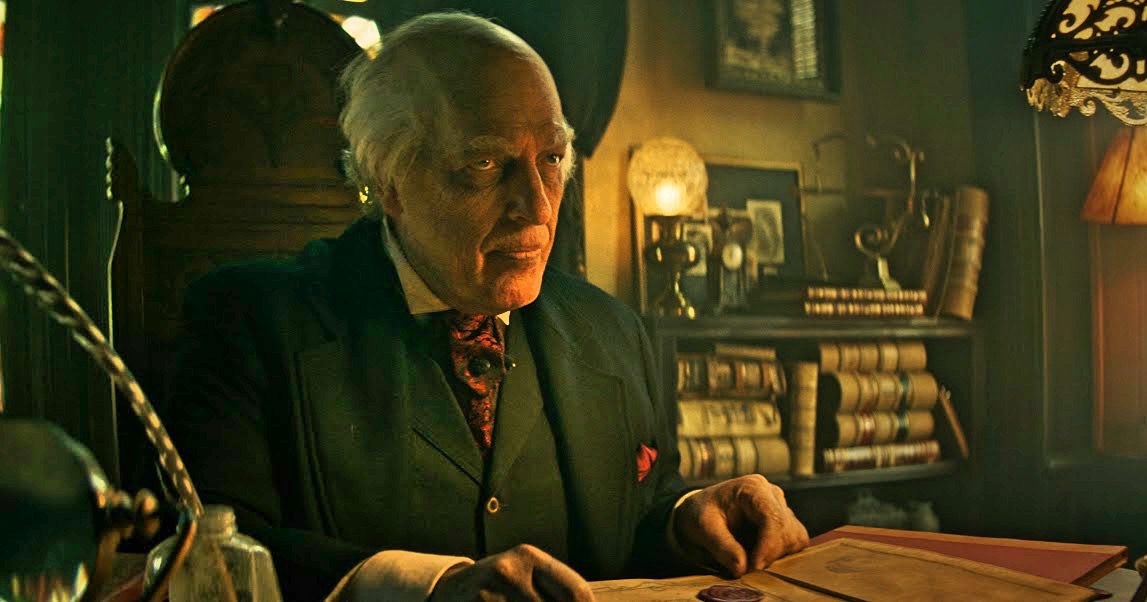 When I noticed the name Clancy Brown in The Mortuary Collection‘s description, it was all the motivation I needed. He is one of my favorite character actors. In fact, he’s so good, he even makes things like Pet Sematary II watchable.

The trailer didn’t fill me with the most confidence, to be honest, but I dove in anyway. Upon hearing Brown’s delivery of the movie’s first line, “The world is not made of atoms. It is made of stories,” I was already confident I’d made the right choice. He started great, and stayed that way.

Unfortunately, The Mortuary Collection is the kind of movie that is difficult to discuss without spoiling, but I promise to do my best. There are quite a few unexpected moments, and I want them to surprise you as much as they did me.

This is an anthology film, meaning it’s made up of multiple tales, each related to a larger narrative. Tales From the Hood, or New York Stories are some examples of this style. This one has come to Shudder, just in time for Halloween viewing.

A False Sense of Security

I will tell you one thing. When we start off, this appears to be something just mildly spooky, maybe even geared toward younger viewers. Like Goosebumps, or the Hotel Transylvania franchise. A fun little PG-rated romp. After you see the first segment, and the start of the next, you think, “well, maybe for teens.” Then you think, “okay, no, this is for adults.”

In my opinion, you do not want to watch this movie with children. Or, you know, do, if they’re gunning to be the next Stan Winston, or something. It goes from “this is cute,” to “oh dear!” rather suddenly.

Our core story features an elderly, deliciously eccentric mortician (Brown), and Sam (Caitlin Custer, credited here as Caitlin Fisher), a young woman who arrives to apply for a job. Each side story is basically the mortician recounting anecdotes of outlandish deaths. It seems he is doing so to test Sam’s intestinal fortitude.

The stories start out mild (the first one, anyway), and build in their intensity. They also grow in their ick factor, just to forewarn you. Honestly, though, the gore is played up to an almost humorous level, a bit like the TV series Tales From the Crypt. And, that’s The Mortuary Collection in a carefully presented nutshell.

This movie is fully aware it’s a movie, which is where much of the fun lies. For instance, Sam comments, “seriously?” after our mortician, Montgomery Dark, tells her his name. “It’s a family name,” he says, in the type of exasperated tone that tells us many people have commented over the years. It’s a subtle moment, but a great one. It also drew a chuckle out of me, because I literally said, “really?” out loud when I saw the character’s name on IMDb.

After the first installment in the anthology, Sam goes full film critic, giving her feedback. It almost seems as though she is speaking on behalf of the viewer. The movie’s wink and a nudge way of letting us know things are about to get more interesting. It is very effective, as it solidifies one’s desire to continue watching.

Something else that may hold your attention as these episodes unfold, is the fact that some characters (or at least their actors) are seen in more than one of them (in fact, one is seen near the start of our main story, as well). You may find yourself theorizing as to why that is. At least, I did. The conclusion I came up with is, Sam is seeing the characters in her head as Montgomery recounts the events. Much like reading a book. So, maybe she is assigning familiar faces to certain characters.

Or perhaps, it was done to successfully merge a former stand-alone short into the rest of the movie (more about that later).

That Second Story, Tho

To say the second story caught me off guard would be an understatement. Also, I really do not want to spoil this one for you, so I am going to be as vague as possible. It definitely contains the sort of comeuppance Sam declared missing from the first story. In fact, it may very well be the most fitting punishment I’ve ever seen a character receive. Also, for fans of The Kissing Booth movies, like our very own Nick Kush, you may enjoy the casting of this one.

There is one moment in particular that is one for the ages. Cult classic material. Mark my words, “remember that scene in The Mortuary Collection, where ____?” will become a thing. Unfortunately, it may also serve as nightmare fodder for a certain segment of viewers.

Bonus: The very end of this tale reminded me a lot of an X-Files episode I’m particularly fond of. Yay for that.

Perhaps I need to re-watch one segment of this movie, entitled “Till Death”, because it’s the only one with an ending I didn’t quite grasp. Is it something that really happened? Delusion as part of the main character’s mental collapse? Dark fantasy?

Despite not “getting it,” I think it may have been my favorite part (other than the core storyline with Montgomery Dark, of course). The acting was believable, and I’m sure it wasn’t easy. Heavy emotional lifting in that one.

I definitely can’t call it a flaw with the movie, because I am 99% sure it was my issue. Maybe I can address that in the comments section after another viewing [embarrassed chuckle].

The final vignette in our collection, which contains major plot points, was originally a 22-minute short film called The Babysitter Murders. It is likely an homage to Halloween, as that’s an alternate title for it, and the score of the horror movie playing on television is very similar. The short made the festival rounds back in 2015, now it’s woven into the tapestry that is this feature.

As you can see on this webpage, the filmmaker, Ryan Spindell, campaigned to secure funding to make The Mortuary Collection. Trapdoor Pictures offered up a trailer for the short film as a pitch for the project. Obviously, a lot of time, work, and hustle went into the creation of this movie. And it shows.

Fun fact: Barak Hardly, the male lead of one of our yarns, played a deputy in the original short film. This anthology is tied together in such a way, Hardly’s appearance serves an entirely different purpose than in the stand-alone short. Brilliant.

Speaking of brilliant, let’s gush about Clancy Brown as Montgomery Dark for a moment. He is arguably the most important element here, as he’s stitching all the parts together. Literally, at one point, in fact.

Dark is far more complex a character than almost any I’ve experienced in horror. Admittedly, I am relatively inexperienced in the genre, but I stand by that statement nonetheless! Dark is at once manic, and stoic. Intimidating, and endearing. He is simply a fantastic character, both in the writing, and the performance.

I think a lot of fun was had in making this collection. From the effects team who got to splatter like nobody’s business, to the actors (of course), to the musicians who crafted the darkly charming music. I would bet no one enjoyed the process more than writer/director Ryan Spindell, though. He waited years for this, and you can’t help but celebrate with him.

Thank you for reading! What are your thoughts on The Mortuary Collection? Comment down below!

I feel attacked, but also: