Through Lively Parody, ‘Galaxy Quest’ is Still a Wonderful Salute to Fandom 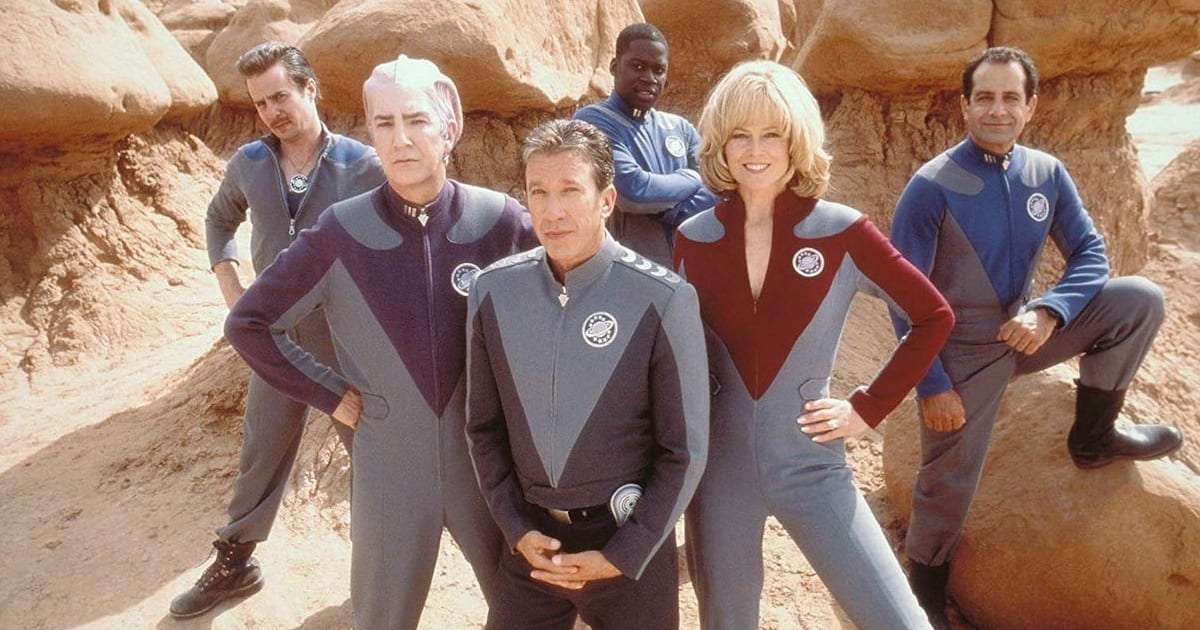 Galaxy Quest represents a relic from a by-gone era: one where spoofs and parodies were produced far more frequently. Gone are the days where we could see Charlie Sheen or Leslie Nielsen appearing in a ridiculous, slapstick take on a franchise or genre. While creating a great parody is undeniably an art form, through the years they evolved into something far more subtle, often appearing on the surface to inhabit the same genre they are in fact ridiculing. Galaxy Quest is a prime example of this, and it has earned its place among the greats, alongside the likes of Young Frankenstein, Spaceballs, Shaun of the Dead, and many more.

When it comes to any spoof movie, there is always the balance between the genre of the original movie(s) and the new, added comedy. Some spoofs will fully embrace the comedy and leave the original genre behind entirely. Just look at Hot Shots! Part Deux or Austin Powers as examples. They may be incredibly entertaining, but they don’t offer the same adrenaline-fueled rides as say Rambo or James Bond. Similarly, the Scary Movie franchise may embrace every famous horror movie from the last 20 or so years, but I’ve never met anyone who has felt scared while watching Anna Faris chasing down the origins of a killer videotape.

Where many parodies will take on the persona of a single idea, movie, or franchise, Galaxy Quest takes things up a level and attempts to battle not just the sci-fi genre, but the entirety of sci-fi fandom, including the actors themselves. What makes this movie truly unique is that it remains loyal to its genre. Audiences feel as if they are being whisked away on the N.S.E.A Protector to help save the Thermians from General Sarris. You’re able to laugh at all the references and jokes, but you also still feel like you’re watching a genuine sci-fi movie. What’s not to like?

It’s immediately obvious to anyone and everyone that Galaxy Quest pokes fun at the Star Trek franchise. But there are subtle nods to other sci-fi features as well, such as Alien, Aliens, The Day the Earth Stood Still, Doom, and many more. Some of the funniest moments come from characters simply calling out how ridiculous or stupid something is. We can only laugh at Gwen DeMarco’s (Sigourney Weaver) reaction to ‘the chompers’:

What is this thing? I mean, it serves no useful purpose for there to be a bunch of chompy, crushy things in the middle of a hallway. No, I mean we shouldn’t have to do this, it makes no logical sense, why is it here?

Another fun example comes from Guy Fleegman/Crewman #6 (Sam Rockwell), who upon landing on an alien planet can only feel terror, shock, and disbelief that the crew is opening the door without performing any scans or checks, all before holding his breath:

HEY! Don’t open that! It’s an alien planet! Is there air? You don’t know!

Some of the jabs are more specific to Star Trek. Jason Nesmith (Tim Allen) ends up taking his shirt off during a fight with a rock monster on an alien planet. This might seem random, but it’s a reference to Captain Kirk who often finds himself shirtless during a fight. We see another Kirk reference when Alexander Dane (Alan Rickman) calls out Jason for stealing his lines and hogging the limelight, this pokes fun at rumors of William Shatner doing the same thing for years.

I could spend the entirety of this post writing about the trivia, jokes, and references. But, let’s not get bogged down in all of that. Not when we can be discussing the heart and soul of Galaxy Quest: the fandom.

A Salute to Fandom

Galaxy Quest is more than just a comedic version of Star Trek. Audiences are part of a journey that merges fandoms, actors, and movies, not just within the science fiction genre, but in all genres. During a Star Trek convention in 2013, a poll was held to determine the ranking of all Star Trek movies. They ranked Galaxy Quest number 7 out of 12.

Are you wondering why this might be the case? Well, we have to consider what it is about Galaxy Quest that appeals to moviegoers. Here is my view as an unashamed fanboy of many movie franchises, TV shows, video games, and books: Galaxy Quest ultimately allows us to see the different sides of any fandom.

We mostly see this through the actors. Sometimes, they have to sit through conventions where fans will repeat the same line to them over and over again. This is something of a running joke in Galaxy Quest. For many of them, that franchise might be the highlight of their career, even if they dreamed of achieving something greater. Alexander Dane comments throughout the movie that he’d once played Richard III and how his current role wasn’t “acting”.

Galaxy Quest doesn’t feel the need to show the fan side quite as much. And why would it? We’re the fans, after all. We all know what it’s like to lose ourselves in a movie, trilogy, or franchise. We know what it’s like to become obsessed, buy the merchandise, and spend every waking minute further exploring this fictitious world. So, the movie just touches on the fan side of things. It demonstrates just how into a show fans can become; in the end, Galaxy Quest has the fans save the day. When all hope is lost, the fans come to the rescue and save the people they respect most in the world.

The movie ends with Jason Nesmith saluting Brandon (Justin Long) and his group of sci-fi nerds. For such hardcore fans, this is the ultimate sign of appreciation. In a way, this is the movie’s way of saluting all of us. It’s a reminder of something that exists within any fandom. There is an unspoken balance or duality between those making the movies and those watching them. Without the actors, directors, editors, producers, writers, etc., there wouldn’t be any movies. Without the fans, no movie would gain a cult following that reaches around the world across countless generations. We are the fans, and Galaxy Quest, in its own way, is letting us know that we’re appreciated.

Thank you for reading! What are your thoughts on Galaxy Quest? Comment down below!

[…] worried they’d be insulted by what we were going to do. It’s interesting to do a parody of something so stylistically specific and that is not good or entertaining in its original form. […]

Galaxy Quest will always be one of my favorite movies. It’s such a fun love letter to fans.