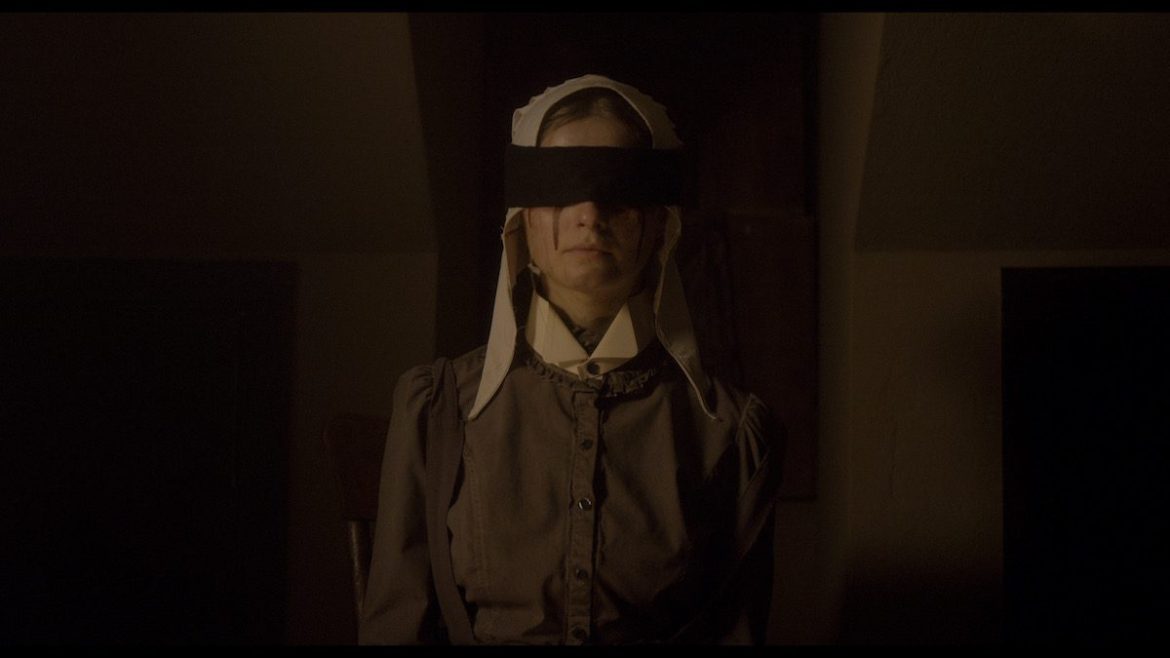 The Last Thing Mary Saw is a 19th-century folk story, centered around sin and suspicion. We are introduced to Mary (Stefanie Scott) as she is blindfolded in a dark, candle-lit room. This is at the end of her story, and we are made more familiar with her through flashbacks after an opening bloody interrogation scene. She is being questioned about the mysterious death of her grandmother (Judith Roberts), the family’s matriarch. Mary’s family believes she has riddled them with a curse, but nothing is as it seems.

Scott embodies this role extremely well, especially with her body language and facial expressions. You can tell she has such a devotion to this character. All of the cast and crew seem very passionate about this project. Edoardo Vitaletti’s first feature-length film is unmissable. He knows the exact direction in which the film needs to progress to make it entertaining enough, yet not stray off-topic, especially when a lot of the scenes are almost in complete darkness with little to no dialogue. It’s a very promising debut.

At the heart of the story is a forbidden romance, which brings about Mary’s family’s accusations of her being evil. Mary is a lesbian, who is sleeping with the family’s maid Eleanor (Isabelle Fuhrman). As Mary is a part of a very religious family, this kind of love is banned and shamed upon. Her family will do anything to rid her of what they think is a crime, including severe punishment. Mary, however, decides to stand her ground, and devises a plan to keep seeing Eleanor. Rory Culkin shows up halfway through as an intruder into the house. His performance is so convincing. His wide eyes and quiet tone make you watch in dread.

Even though this relationship is the centerpiece of the narrative, it’s quite reserved. It’s beautifully incorporated, with genuine passion from both women involved. Just because a film has a gay storyline doesn’t mean it has to constantly address it. It’s subtle and sweet — despite everyone else hating them for it. They deserve to reach Portrait of a Lady on Fire levels of being iconic.

This Horror Movie Just GETS It

The cinematography is the highlight of the entire film. With so much of it taking place in very dark spaces, cinematographer David Kruta is phenomenal at making everything look exceptional. I can’t wait to see him take on other features like this. It’s one of those films where you constantly keep convincing yourself that something is emerging from the darkness, kind of like the bedroom scene in Hereditary. Horror doesn’t always need to be relentlessly bloody for it to be good. The Last Thing Mary Saw is anxiety-inducing, which creates a genuine fear of what is going to happen next.

It’s not my favorite horror film of all time, but I can safely say it’ll be one of 2022’s best when it premieres on Shudder next year. There’s something about horror movies like this that make your skin crawl with worry. Thank you, Edoardo Vitaletti!!!!!

For more information on The Last Thing Mary Saw and other films playing at the Fantasia Film Festival, check out their website.

Thanks for reading! What are your thoughts on The Last Thing Mary Saw? Comment down below!

The Vampire Takes New Form in ‘Boys from...