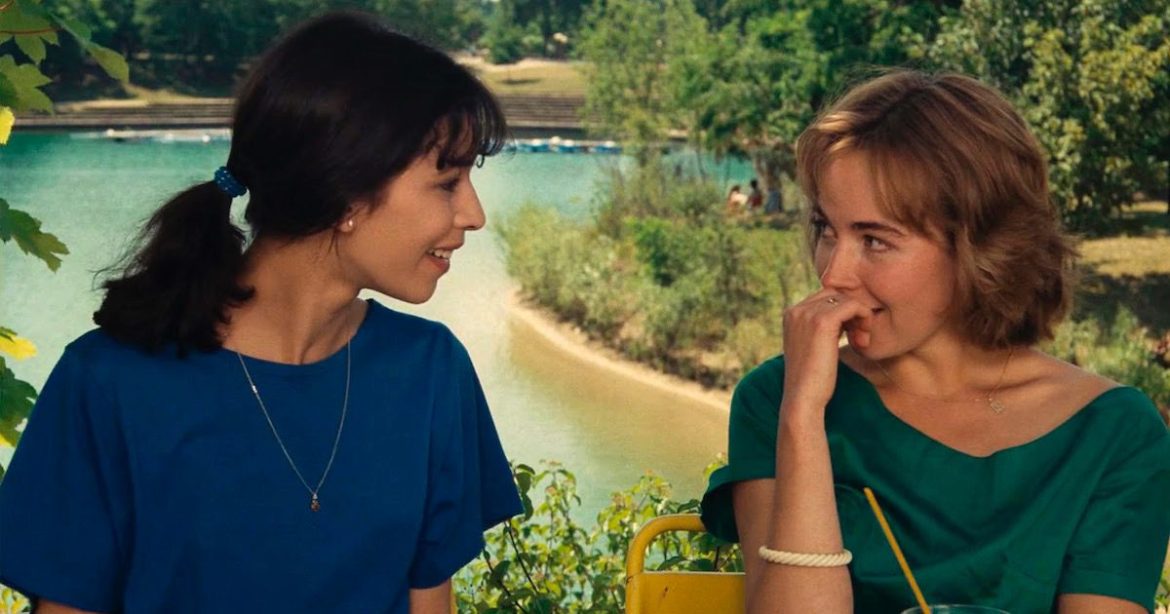 Picture yourself in the midst of a sunflower field on a hot summer’s day, surrounded by friends, with a glass of wine. That’s what it feels like to explore Éric Rohmer’s filmography. It’s a breath of fresh air. Dealing with love and a genuine passion for others, Rohmer writes and directs with such elegance. It’s without a doubt that something by him would interest anyone. From a genuine love story, to an escape to Paris. To new friendships, and sunny beach days. Rohmer has your summer covered.

Rohmer worked within topics. Two collections are of notable appraisal and are the focus of this exposition.

Six Moral Tales: The Bakery Girl of Monceau, Suzanne’s Career, My Night at Maud’s, The Collector, Claire’s Knee, and Love in the Afternoon.

Comedies and Proverbs: The Aviator’s Wife, A Good Marriage, Pauline at the Beach, Full Moon in Paris, The Green Ray, and Boyfriends and Girlfriends.

Or dive into Four Adventures of Reinette and Mirabelle and A Summer’s Tale (part of Tales of the Four Seasons). Whatever the summer feeling might be, there’s something for everyone.

Familiarizing myself with Éric Rohmer’s work was something I set out to do at the end of last year. Claire’s Knee was recommended to me earlier on in the year and I was determined to dive into his universe finally. My lust for French cinema evolved when studying the French New Wave in my final year of high school. French classics, both new and old, have always been of great interest. Expanding this knowledge and love is what I intended to do when visiting Rohmer’s filmography, but I never expected to find a new favorite director.

I began with Full Moon in Paris. I became hooked into the world Rohmer creates. An efficacious look at Parisian love, friendship, and everyday life. It wasn’t long before I took on my next two Rohmers. In fact, my infatuation became so strong after watching Full Moon in Paris that I watched both Pauline at the Beach and Four Adventures of Reinette and Mirabelle on the same day. Reinette (Joëlle Miquel) and Mirabelle (Jessica Forde) quickly became two characters I admired. From the beautiful shots of the countryside, to the companionship both provide for each other, I instantly became fond of Four Adventures of Reinette and Mirabelle.

After watching my first four Rohmer features, I didn’t want to stop there. I was mesmerized by the way Rohmer was presenting France onscreen. I was mentally collecting similarities and differences between all of his works to be able to put together my own words and opinions into writing. Being spellbound like this is rare for me. Occasionally, you find a director you marvel at, so much so that you want to sit down and watch everything by them. You wish their work was never-ending. (Ari Aster, Gillian Robespierre, and Kelly Reichardt are three names that come to mind instantly in recent years.)

Upon watching Claire’s Knee for the first time, I was struck by the storyline. Claire’s (Laurence de Monaghan) knee did in fact make an appearance (which I had been promised), but a 40 something-year-old man yearning after teenage girls isn’t what you want to be romanticized onscreen. Jérôme’s (Jean-Claude Brialy) character traits should make every viewer hate him. We long for a world in which Laura (Béatrice Romand) and Claire are free of Jérôme. Claire’s Knee became my least favorite Rohmer at this point, but I still fell in love with its beautiful cinematography.

One thing that stands out above the rest in Rohmer’s work is his ability to capture summer. While he does incorporate other seasons into his films (A Tale of Winter, Autumn Tale, and A Tale of Springtime), summer seems to always be the main focus. Who doesn’t want a summer romance? Maybe some people don’t want to be home alone watching people fall in love, but in Rohmer’s world, it’s not all happy romances. It’s the reality of falling out of love, maturing, and realizing you don’t need anyone but yourself. But of course, there are happy endings. There are instances where characters become so satisfied knowing love is out there for them, that you become hopeful for yourself. It’s bittersweet.

Reinette and Mirabelle fall in love with friendship. Louise (Pascale Ogier) in Full Moon in Paris recognizes she can still be head over heels in love, while continuing her independence as a single woman. Blanche (Emmanuelle Chaulet) and Léa (Sophie Renoir) tackle their relationship worries in Boyfriends and Girlfriends, and Haydée (Haydée Politoff) in The Collector taunts the men she is surrounded by, bruising every male ego in sight. These stories unfold on-screen so effortlessly.

From Paris With Love

Where some character arcs do fall flat (unfortunately in his shorts), the visuals never disappoint. You can always count on Rohmer to present a summer that you wish you could be a part of. The beach scenes in Pauline at the Beach are second to none. The Parisian summertime in Love in the Afternoon, watching Frédéric (Bernard Verley) and Chloé (Zouzou) sit in a café, talking like they’re the only two people in the world while the world rushes by, is astonishing. This atmosphere makes you want to hop on a flight to Paris and experience a summer like this for yourself. Alas, making a cocktail and turning on a Rohmer film will create that feeling from the comfort of your own home.

Rohmer has the ability to capture the genuine pleasure of being alive. These characters finally get the chance to understand freedom. Their journey begins with them knowing little about themselves, trapped inside a headspace they want to escape. Some don’t even know that they’re living a toxic lifestyle until they meet a passerby and feel the need to reevaluate their entire existence. Others move away from the start because they are unsatisfied. Full Moon in Paris finds Louise knowing she can’t continue living a mundane life so must find the true meaning to life. Delphine (Marie Rivière) in The Green Ray encounters true peace as soon as she takes even the tiniest step outside of her comfort zone.

We see romance films on our screens all the time. La La Land, Portrait of a Lady on Fire, Before Sunrise, When Harry Met Sally, Chungking Express, Casablanca, the list is never-ending. What makes a Rohmer feature so distinct is that it feels like a real love story unfolding. The Before Trilogy does something similar. There is a fair amount of heartbreak, but there are also strong amorous desires. Certain characters have to experience what it’s like to be cheated on, to not find the one, and to learn that it’s not all sunshine and rainbows. This authentic portrayal of relationships is what makes them stand out above their peers.

The Bakery Girl of Monceau and Suzanne’s Career, the first two tales in the Six Moral Tales, capture a quick realization of lust. The Collector highlights a woman so charismatic that every man wants her. When a divorced hypnotic woman, Maud (François Fabien) comes into contact with Jean-Louis (Jean-Louis Trintignant) in My Night at Maud’s, love never leaves the air. Claire’s Knee finds Claire, Laura, and Aurora (Aurora Cornu) being gazed upon by Jérôme. Who does he really want to marry? Love in the Afternoon, the last in the Six Moral Tales, ends on such a loving note.

Where one collection ends, another must begin. The Aviator’s Wife is completely satisfying. This is the film that made me want to go and pack my bags for real and move to France. Humble is possibly the best way to describe this lovely early 80’s feature. Sabine (Béatrice Romand), in A Good Marriage, decides she is deserving of a good marriage (it really does exactly what it says in the title). Characters in Pauline at the Beach and Full Moon in Paris experience a ‘finding your true self’ narrative. Pauline (Amanda Langlet) is on a family vacation and meets a young man that she loves. This almost coming-of-age film is perfect to watch while dreaming of the beach.

The Green Ray, possibly one of Rohmer’s most famous films, explores a whole summer of Delphine finding herself. Boyfriends and Girlfriends, the last of Rohmer’s Comedies and Proverbs, is underrated. This late 80’s feature encapsulates everything we know and love about Rohmer. Friendships are thriving and the cinematography is beautiful to witness. Outside of the Comedies and Proverbs series, A Summer’s Tale is a perfect example of the way Rohmer shows summer on screen. Men and women are falling in and out of love, while visiting beaches and staring lustfully into each other’s eyes.

If you find yourself seeking a summer tale that can bring the hot weather solace of your own living room, Rohmer can do just that. Anything mentioned, or any other film in his extensive filmography captures the everyday essence of life.

Most Rohmer films are available to stream via various platforms. Currently, the Metrograph is featuring a restored collection of The Aviator’s Wife, Boyfriends and Girlfriends, and Four Adventures of Reinette and Mirabelle in their Summer of Rohmer series. Visit their website for more details.

Thanks for reading! What are your thoughts on Éric Rohmer’s films? Comment down below!