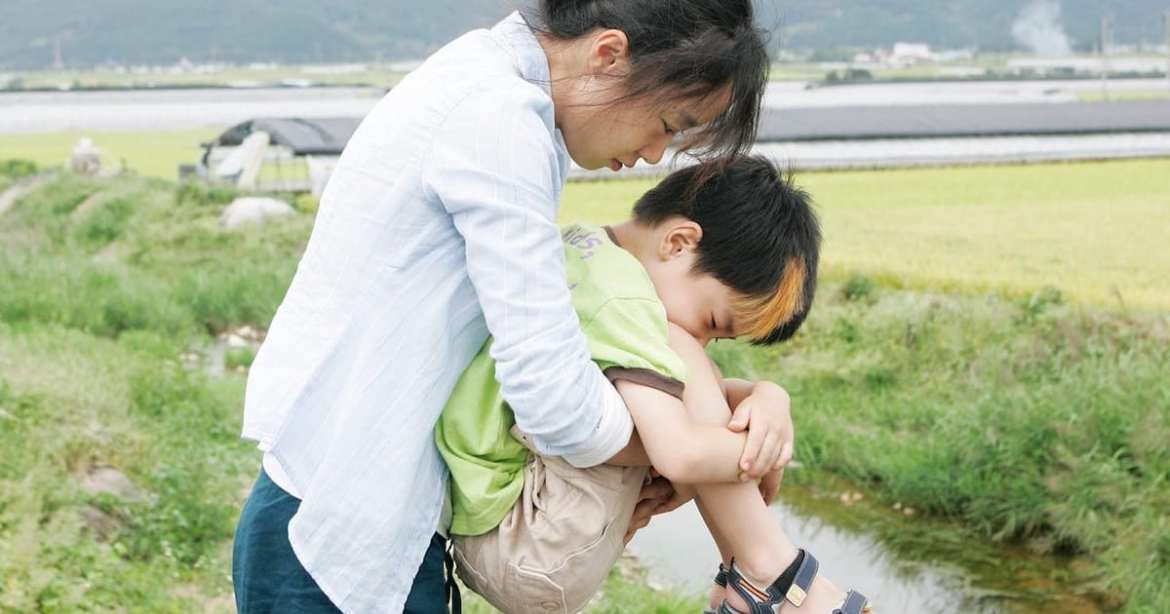 It’s no secret that Korean cinema is having a bit of a moment these days — whether it be due to the wild success of Bong Joon-ho’s Parasite, the recent love for Lee Isaac Chung’s Minari, or just the growing interest American audiences are starting to show for international cinema. As a Korean-American filmgoer, I’ve made it a part of my mission to seek out and recommend great Korean films that aren’t very widely known, yet deserve all the recognition and acclaim they can get. That’s the aim of my latest column, Films from the Peninsula, where I take a look at a handful of stunning yet overlooked Korean movies, both old and new, for readers interested in the diverse landscape of Korean cinema. First up, Lee Chang-dong’s 2007 masterpiece, as well as the first Korean film to enter the Criterion Collection; Secret Sunshine.

Few people outside of South Korea are fully aware of the extent to which Christianity remains woven into the country’s social fabric. Although only 30% of its population identifies as Christian, the fervent enthusiasm with which South Korean evangelists spread their message would probably make anyone think twice about the religion’s relatively low prevalence. For skeptics, a trip to the country itself will likely serve as a proper wake-up call — devout church-goers proselytize with wide smiles, handing out CDs on street corners to passers-by, and the vivacious Christian rock music that blares through church windows can often be heard from dozens of blocks away.

If there’s a South Korean filmmaker qualified enough to examine these religious institutions on a deeper level, it’s director Lee Chang-dong, who, throughout his 20-year filmography, has repeatedly proven his expert capability to peer into the nuances of South Korea’s social issues. It’s easy to call his films smaller in scope and more realistic in comparison to his genre-bending peers — Bong Joon-ho (Snowpiercer) and Park Chan-wook (Oldboy) are perhaps the first filmmakers who come to mind — but they often use said realism to incredible effect, displaying the country’s systemic machinations exactly as they are to show how they leave an imprint on intimate, personal lives.

Whether it be the country’s hostile treatment of disabled individuals in Oasis, the vicious totalitarianism of the 1980s’ South Korean government in Peppermint Candy, or the conspiratorial class-related anger of this generation’s youth in Burning, Lee has never once lost sight of his keen social perception, brilliantly spotlighting all of these issues through the stories of deeply complex, singular protagonists. His 2007 opus, Secret Sunshine, is no exception to this trend; in fact, it might be one of the most powerful displays of Lee’s storytelling and filmmaking skills to date.

II: The Film Itself

Secret Sunshine‘s singular protagonist is Lee Shin-ae (Jeon Do-yeon), a recently widowed mother who moves into a town called Miryang with her son, Jun, wanting to start a new life there after her husband’s death. Miryang has some things worth noting about it; her late husband was born and raised there, and the town’s name has a syllabic Chinese translation whose meaning is used as the film’s English title. (For those who are curious, the Korean title’s just Miryang. There’s really not much else to it.) Specifically, “mir (밀)” is the “secret” in question, while “yang (양)” is the “sunshine”, yet it’s early on in the film that Shin-ae learns just how the town lives up to the two words in its name.

When it comes to the former, it’s subtler yet much more prevalent; Shin-ae’s new neighbors — most of whom are, of course, Christians — frequently spread gossip about Shin-ae and her fraught past, all while they cordially proselytize to her with warm smiles. The latter, meanwhile, is a much rarer find, most often taking the form of the somewhat overbearingly kind Jong-chan (Song Kang-ho), a mechanic who fixes her stalled car at the film’s opening and helps her set up shop for her piano teaching business.

Just as Miryang remains a subtle yet constant reminder of Shin-ae’s loss, it soon becomes the birthplace of yet another vicious, crushing tragedy — one that, for the sake of this review, won’t be described or spoiled. In its ruinous aftermath, Shin-ae finds herself seeking support from her local church community, where she is readily embraced by its members and willingly converts to the Christian faith, devoting herself to its teachings. As time passes, however, various forces test and chip away at her newfound faith to a harrowing breaking point, culminating in a deeply complex character study and a bleak dissection of flawed religious institutions.

With all that said, it shouldn’t be surprising that the thematic core of Secret Sunshine isn’t interested in painting Christianity in a purely positive light. However, Lee finds a remarkably delicate balance between delivering heavy criticism on its more exploitative tendencies and providing an almost sympathetic insight into why people believe in and rely on religion as a whole. The film’s general stance on religion never slants one way or another as a result; even if it holds a more realistic and bleak perspective, its sense of objectivity juxtaposes the sweeping scope of its themes with the modesty of its scale, bringing the audience to intimate, authentic, and ultimately truthful conclusions.

To that end, there is a real honesty in how Lee’s screenplay portrays Shin-ae’s conversion to Christianity following her utterly blindsiding tragedy. For instance, one need look no further than one of the film’s most moving scenes — in which Shin-ae breaks down into unrestrained, cathartic wailing during her first church attendance — to fully realize that a belief in God can provide a genuine sense of solace to people seeking refuge from devastating trauma. The scenes that follow in the subsequent half hour only seem to further support this; for a time, Shin-ae seems to be fully at peace as she works with her neighbors and fellow devotees to spread the word of an omnibenevolent, forgiving God. That said, the heavily upsetting final third of Secret Sunshine shows a vested interest in exploring the exact opposite — the cruel irony of a God who is merciful to any and all who seek forgiveness, no matter their past actions, and how opportunistic religious institutions in South Korea inevitably cannot provide answers to those suffering from serious spiritual dilemmas.

Returning to the point about Lee’s films being relatively unpresuming both in terms of style and scope, Secret Sunshine is still clearly driven by understated cinematography choices that bring out the best of what’s on screen. For instance, one of its most prominent visual motifs is the sky, which is often highlighted by the film’s subtle use of a wider aspect ratio, as well as its more rugged yet purposeful documentary-like feel. It’s especially apparent during the film’s first few scenes, visible in every shot of Miryang’s mountainous rural landscapes and through the windows of Shin-ae’s car. Here, the “sunshine” in the film’s title manifests in a very literal sense, and the sky is subtly marked as a future point of reference for Shin-ae as she navigates her tumultuous, deeply spiritual story. As she assumes her newfound Christianity, she’s often not just staring up at the sky anymore, but also gazing straight through its blue veneer to confront God Himself, something that takes on different emotional meanings as the film transitions from one phase to the next.

Speaking of Shin-ae, it’s impossible to leave out Jeon Do-yeon’s incredibly stirring lead performance, as it immediately becomes clear that taking on this role could not have been anything less than grueling for her. Jeon’s portrayal of Shin-ae’s trauma and grief is painfully realistic, and the complex yet volatile emotions that she unfurls in every gut-punch-moment of Secret Sunshine never once feel tired, overacted, or generic. It’s a genuinely impressive achievement — one that got her a well-deserved Best Actress win at the 2007 Cannes Film Festival, and one that confidently cemented her as one of the best South Korean actresses working today. Likewise, Song Kang-ho is as prolific as ever, grounding the film with a sense of levity through his portrayal of Jong-chan, who’s a relatively simple man with simple desires. His character is a restless, overbearing advocate for Shin-ae’s every move, even going so far as to follow her to church and convert alongside her simply because of the peace that religion seems to offer him. Song’s lively disposition, however, ensures that Jong-chan’s personality also comes off as endearing, ultimately keeping his character from becoming an annoyance to the narrative. As the film progresses, both actors continue to play off of each other’s strengths absurdly well, with Song’s measuredly charming performance complementing Jeon’s breathtakingly bold and harrowing tour de force. The characters are what make up the center of any character study, after all, and to that end, Jeon and Song are wildly successful at bringing their roles to life.

While there’s definitely a cultural specificity that Secret Sunshine possesses, especially with its portrayal of modern Korean evangelicalism, the spiritual questions it asks about religion and its relationship with grief are universally timeless. It’s a patient movie, often dragging out the brutality of its protagonist’s story and creating a truly raw cinematic experience in the process, but it’s also immensely daring — not since Ingmar Bergman’s Winter Light has a film so courageously ventured into these indefinite religious dilemmas and come out the other side with some form of clear insight. It’s a representation of the best South Korean cinema has to offer; an unforgiving look into how religion can be cruelly deceptive and elusive, but also an examination of why it remains such a necessary force in so many people’s lives.

Thank you for reading! What are your thoughts on Secret Sunshine? Comment down below!

Grief-Stricken Grandparents Venture into Satanism in ‘Anything for...