‘Gunpowder Milkshake’ Is Only for the Most Forgiving Action Movie Aficionados 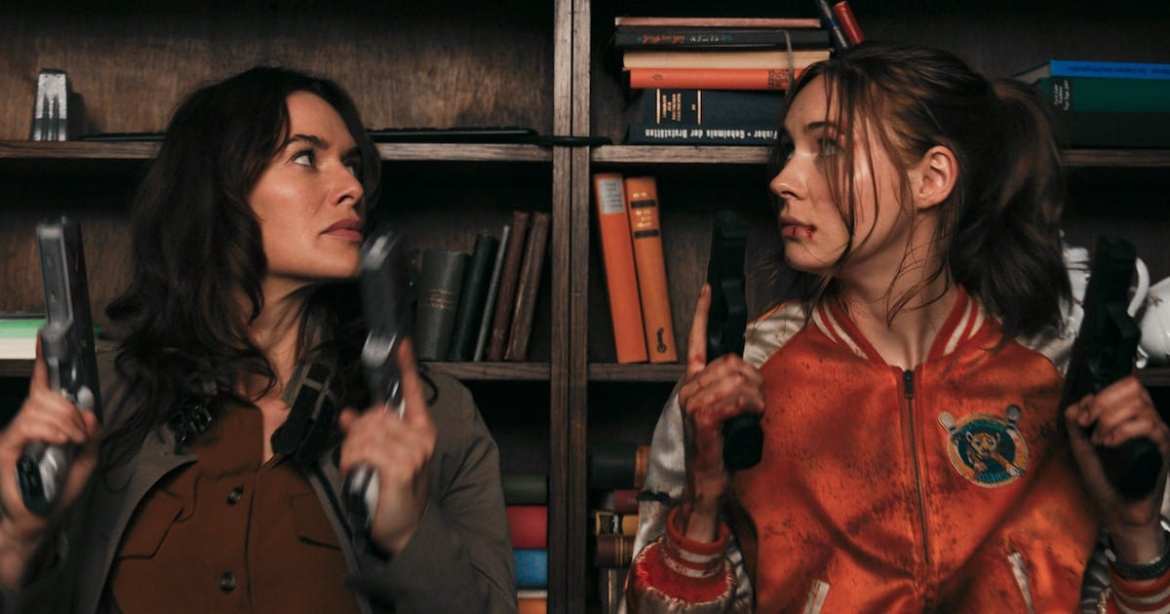 Stop me if you’ve seen this one before: a highly-skilled assassin working for a shadowy organization gets betrayed by their employers and is hunted down; said assassin, though merciless if need be, becomes emotionally attached to a child and even becomes willing to risk their own life for the child’s safety; said assassin also kills the son of a high-ranking gangster who then wants revenge.

The assassin in question is Sam (Karen Gillan), an employee of The Firm, a vague but seemingly powerful organization. Her main contact is Nathan (Paul Giamatti), who is head of the HR department and at times, is a paternal figure to Sam. In Sam’s last mission, she managed to kill the son of a high-ranking gangster, Jim McAlester (Ralph Ineson), who now vows revenge. But as long as she’s protected by The Firm, her identity should be safe.

Sam’s next target is an accountant who stole a hefty amount of money from The Firm. As she tracks down this accountant, she finds herself in the midst of the kidnapping plot, involving the accountant’s daughter, Emily (Chloe Coleman). As things go wrong, she loses the protection of The Firm and even becomes identified by McAlester’s men.

As the twosome try to make it out alive, they receive sudden help from Sam’s estranged mother, Scarlet (Lena Headey), who is also a highly-skilled assassin herself (of course). The three of them take refuge with The Sisterhood, a group of three women who run a weapons armory disguised as a library. The Sisterhood consists of Madeleine (Carla Gugino), Florence (Michelle Yeoh), and Anna May (Angela Bassett). With the collective deadly skill of these women combined, they might just survive the night…

Being unoriginal is not necessarily a bad thing. It all depends on the execution. Plenty of action films are filled with derivative clichés but manage to stand out nonetheless — the John Wick franchise being the latest obvious example of this.
Watching Gunpowder Milkshake, you’re often reminded of the John Wick franchise, especially with its worldbuilding. Just like in John Wick, Gunpowder Milkshake hints at a larger universe, a secret underworld in which criminals and assassins follow specific moral codes.

No matter how ridiculous the underworld of John Wick is, it feels fleshed out. We see glimpses of how the world operates. Unfortunately, the universe hinted at Gunpowder Milkshake doesn’t seem very well thought out. Everything remains very vague. We never get an idea of how The Firm operates, only that Paul Giamatti’s character takes orders from shadowy men in expensive suits.

We are introduced to a small hospital setting run by a laughing-gas-addicted doctor (played amusingly by Michael Smiley), which seems to solely cater to employees of The Firm. The Sisterhood runs a gigantic library, in which guns and other objects are hidden among their collection of books. We are introduced to an American-styled diner, which seems to serve only the denizens of this underworld, where guns are not allowed — though this rule doesn’t seem to matter in the long run.
None of it seems to gel together. Rather than clarifying the universe of Gunpowder Milkshake, these locations seem to exist solely for an action set piece.

And that’s the main problem of Gunpowder Milkshake. The script is nothing more than a series of action set pieces. This wouldn’t be an issue if the characters were interesting enough. But even on that aspect, the film unfortunately falls short.
It’s not the cast’s fault, however. In fact, if it weren’t for the strong cast, the film wouldn’t be as entertaining. Every performer gets the best out of the thin material.

Karen Gillan plays the typical stoic assassin who turns out to have a heart of gold. Too bad there’s not really a character arc for her. She just seemingly decides to save the life of a child because the script told her to. We’ve seen the trope of a hardened murderer finding their humanity through the company of a child before — see Leon or Logan — and when it’s done right, you can have yourself a moving piece of action cinema. But in the case of Gunpowder Milkshake, their relationship is all surface level. Their bond doesn’t grow naturally.

The always magnificent Lena Headey convinces as the repentant mother, even though she has to convey this with some seriously clunky dialogue.

The presence of Michelle Yeoh does make you realize how underrated she is; in fact, out of all of the women, she is the most convincing in the action scenes. Even though she has quite a prestigious career in China, she’s been mostly underutilized in Western cinema.

Angela Bassett makes great use of her commanding presence. Just like Yeoh, you realize how underrated she really is. Gugino is predictably delightful, and probably the most sympathetic of the Sisterhood. Watching these three veterans together makes you yearn for a movie just about them. The combined charisma of these three women would make for a solid movie in itself.

The gravely voice of Ralph Ineson is sadly squandered as the main villain. He’s threatening enough, but gets almost nothing to do. A few more scenes of him mourning for his son could have made his character more impactful. In his final scene, we are suddenly treated to a monologue, hinting at something deeper within his character. But even with Ineson’s solid delivery, it’s just not enough to flesh out his character. It’s too little, far too late.

As for the action, the movie does deliver on that front. Director Navot Papushado’s strong visual eye and desire for long takes result in some great action scenes. The first one involves an elongated fight scene in the bowling alley, draped in neon light. While Gillan is obviously not a master martial artist, she does a great job here.

Each of these women gets a chance to kick some ass. Some are more skilled than others (Yeoh, considering her history in martial arts and action cinema, being the obvious standout). Like most actions films of today, the film has an abundance of CGI blood. Gone are the days of squibs. But considering the great choreography on display, this is mostly forgivable.

The film’s most memorable and inventive sequence involves a fight in the hospital corridor, in which Sam, having lost the use of her arms, has to take down three henchmen, who are all hopped up on laughing gas. Since these individual henchmen are still recuperating from their last fight with Sam, they are all bandaged up, in a cast, leaning on crutches, and in one case, on a wheelchair. This leads to some inspired choreography.

But due to the film’s flaws, you find your mind wandering, pondering the lack of logic in the story, leading to the discovery of innumerable plot holes. I understand that the plots of these films are not meant to be dissected, but it’s an indication of how unengaging the material actually is. I don’t find myself questioning the logistics of John Wick’s universe because I’m too invested in what’s going on. If you care about the characters, it’s easier to forgive any number of problematic plot holes.

In the case of Gunpowder Milkshake, the film just lacks any essential emotional resonance. You find yourself not caring whether Emily survives or whether Sam rekindles her relationship with her mother. You’re just waiting for the hail of bullets to whizz through the screen again.

If you just desire to kill some time with some action movie shlock, you could admittedly do far worse. Certainly, this is preferable to the phony CGI wizardry in modern blockbusters. I applaud making these films, regardless of their flaws. But for me, Gunpowder Milkshake was mostly a frustrating watch. The talent is there, the foundation is just flawed. If the script was better, this could have been a nice boost for female-oriented action cinema.

Here’s hoping Netflix will learn at least one important lesson from this movie: Michelle Yeoh needs a new action movie franchise. Perhaps a buddy-cop movie with Angela Bassett co-starring alongside her?

Thank you for reading! What are your thoughts on Gunpowder Milkshake? Comment down below!

I didn’t think of it while watching Gunpowder Milkshake, but I like the comparison you make to the John Wick movies. While I can’t, and don’t, argue any of the negatives you point out, I liked the movie. A fun, fantasy twist on action movies, that doesn’t take itself too seriously. My only complaint, was the ending. Riding off into the sunset? Please! They should have taken The Firm out.