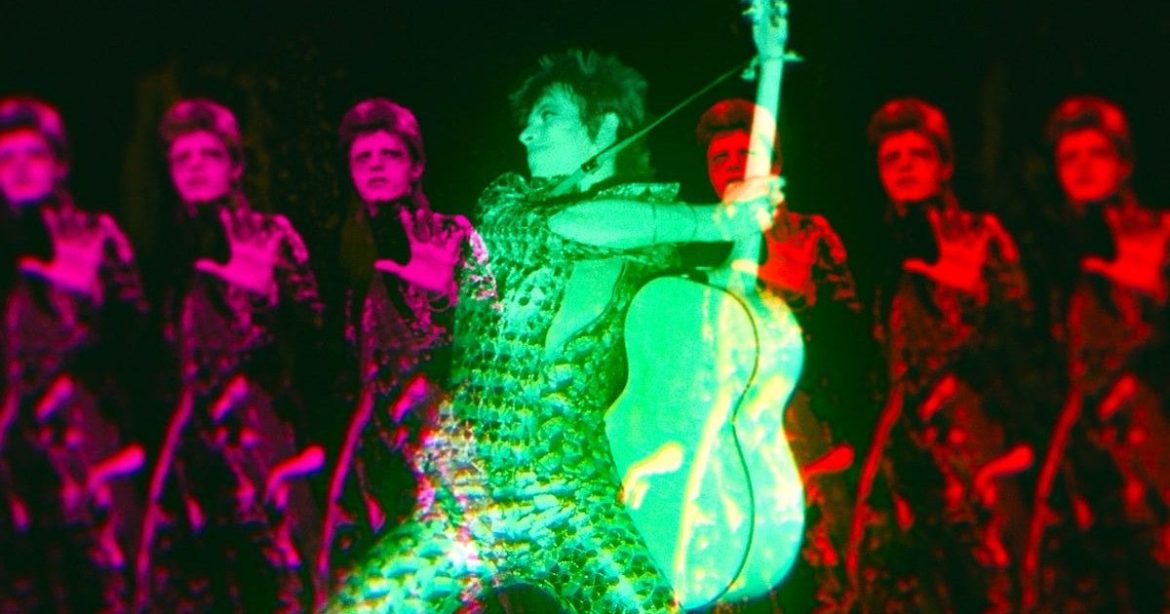 January 9th, 1997. David Bowie stands before a massive crowd at Madison Square Garden at a special concert event for his 50th birthday and exclaims, “I don’t know where I am going from here, but I promise I won’t bore you”. Such a beautiful summation of why icons stand the test of time; Bowie lived to entertain but he was unpredictable, constantly reinventing himself, evolving and breaking new ground as an artist, unsure of what exciting new area his work will explore next, whether it be in music, theatre, film, painting, or even sculpting.

After Bowie’s shocking death from liver cancer in January 2016, the legacy he’s left behind is insurmountable and a legend as game-changing as him is worthy of a grandiose cinematic tribute. Enter Oscar-nominated documentarian, Brett Morgen. Given carte blanche to a treasure trove of archival interviews, performances, music videos, travelogues, and other never-before-seen video footage, he’s created a lurid and vivacious spectacle that is equal to that of its one-of-a-kind subject. There are no talking heads lionizing Bowie’s genius as an artist nor is it a crib-to-crypt rundown of his life story, but Moonage Daydream is a dazzling, cosmic musical odyssey (or I guess in this case, oddity) into David Bowie told in his own words.

Moonage Daydream is not just a greatest hits album in search of a montage to compliment it. Morgen forgoes the conventions of the music documentary in favor of a visual feast for the eyes best devoured on an IMAX screen. Crafting kaleidoscopic arrays of concert footage spliced with 20s expressionist silent cinema, Bowie’s own home movies, news reports, and other Bowie-related video ephemera, the film is structured and presented with the same level of awe-inspiring spectacle as if it were a musical. And this film really delivers on what people loved most about Bowie; his music. The use of Bowie’s music to underscore and emphasize his state of mind at different points of his life either related or unrelated to the song itself is what makes it so captivating. The use of “Space Oddity” when talking about how he felt like an empty vessel and struggled to find value or purpose in his life when he was not making art and the later use of “Modern Love” in his return to music after a 3-year absence, coming to terms with just who exactly David Bowie is after a crisis of identity. Both of these moments exemplify how perfectly his extensive catalog of songs are used to aplomb in the film.

The most unexpected and disarming aspect of Moonage Daydream other than Bowie’s overwhelming modesty in his interviews is how the film becomes a very inspiring treatise on art itself and just what it means to create. Bowie talks at length about his process, but never once with any shred of arrogance or pretension. He saw music as a way to express what it means to be alive and all the things about life that are impossible to explain; a sentiment reflected beautifully by the film’s treatment of Bowie’s work. How the search and the process of creating is more vital than the product itself and finding fulfillment and pride in that process is what is really important. The film has no shortage of philosophical musings from Bowie, but this one specifically speaks to his humility and dignity as both an artist and a man.

Moonage Daydream is a triumph of documentary filmmaking. Not a “warts and all” portrait of David Bowie nor a full-blown hagiography, but a very honest, upfront, and candid reflection on life and art that is as bold and unpredictable as its incredible subject. A euphoric cinematic tribute to a man who even after he’s passed on is continuing to blow our minds.

Thank you for reading! What are your thoughts on Moonage Daydream? Comment down below!

‘The Nowhere Inn’ Ruins the Tour Documentary For...