‘Blonde’: A Painstakingly Limited View of a Woman

There sure is a lot to talk about in Andrew Dominik's first narrative film in a decade, but rarely is it intellectually stimulating. 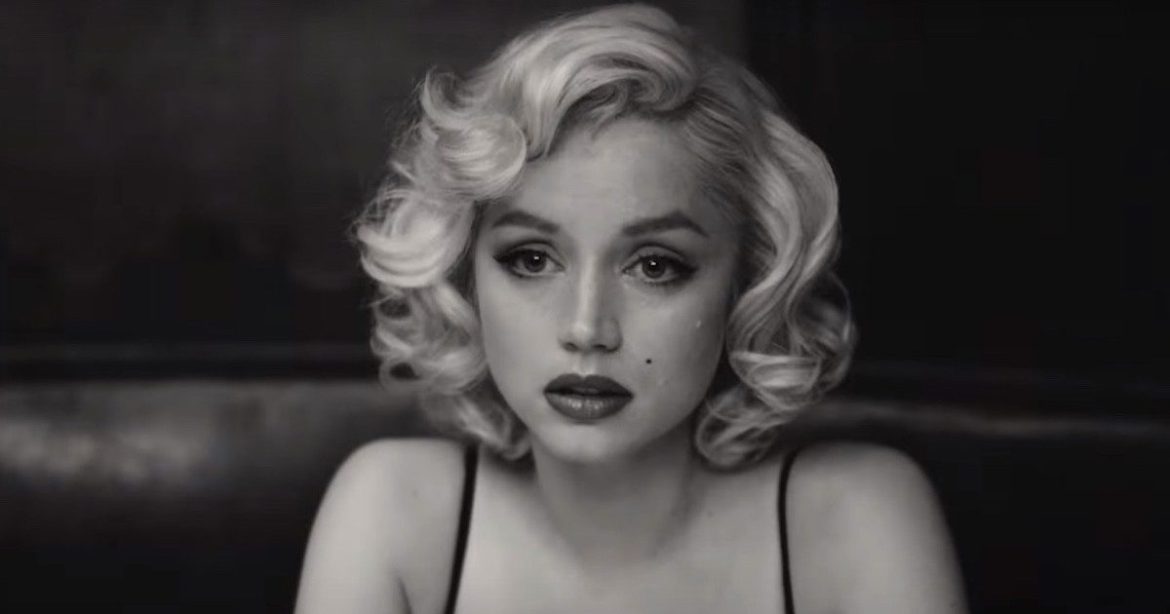 It’s been a more-than-a-decade-long odyssey for Blonde to finally come to fruition. Andrew Dominik was reportedly drawn to the project all the way back in 2010. A few hiccups later — casting shifts, financing issues, and even a pandemic-related production shutdown — Blonde finally gets to see the light of day at Netflix. All the while, Dominik certainly had a lot of time to consider each frame, this being his first narrative feature since 2012’s Killing Them Softly. Watching the final product, it certainly feels that way too. Blonde is overflowing with arresting images, to the point where I’d argue Dominik over-considered each shot. Nevertheless, there’s a clear purpose in Blonde‘s visual language. It’s labored over, and has a true point of view.

The same can’t be said for the film’s representation of Marilyn Monroe. At no point in Blonde‘s painful, downright brutal three hours does it ever have a discernible read on its main character, which becomes even more confounding as the film doubles, triples, and quadruples down on its depictions of trauma. It’s truly a bizarre experience — rarely have I found a film so clearly overwrought and yet so mindbogglingly brainless.

Dominik adapted Blonde from the book of the same by Joyce Carol Oates, which is a largely fictional take on Norma Jeane and her alter ego Marilyn’s life starting from when she was a child to her eventual end. The trauma starts right from the jump as Norma Jeane’s schizophrenic mom (Julianne Nicholson) tells her that her father is a famous actor who will one day return for her, only for her mom to later attempt to drown her in a tub. You could say we’re off to the races from there, as we fast-forward to an adult Norma Jeane (now played by Ana de Armas) as she struggles to gain a foothold in the film industry, and only gets a shot at stardom after getting sexually assaulted in an executive’s office.

Those daddy issues hover over the entirety of Blonde as a specter that haunts Norma Jeane for her entire life, as she struggles with her many lovers. In the movie’s worst recurring motif, Norma Jeane calls all her gentlemen callers “daddy.” (It’s very icky and also an incredibly stupid manifestation of her father impacting all of her relationships with men.) There’s a sense of doom to how the movie unfolds — Norma Jeane started off on the wrong track with an absentee father and a mentally ill mother, and her life was only ever going to get worse from there. Dominik infuses this descent with plenty of cosmic imagery, as if Norma Jeane’s path was always written in the stars. All of this, while very artfully displayed, is so…superficial. Even hilariously so. The idea that all of Norma Jeane’s trauma stems from her generically bad upbringing — to the point where it nearly incapacitates her in social settings — is next-level psychobabble. Early on, it’s obvious that all of Blonde‘s pop psychology is complete nonsense.

One has to wonder if Dominik took Oates’ novel at face value, choosing not to interrogate any of its ideas and focus instead on an avalanche of images. To be fair, Blonde does look great. Dominik goes to great lengths to recreate classic Monroe images, utilizing many different film stocks, aspect ratios, and camera techniques, while routinely switching between black-and-white and color. (Although, it’s routinely difficult to discern what purpose these choices serve, other than to possibly stroke Dominik’s own ego.) But the film seems entirely uninterested in creating a genuine character study that goes beyond depictions of extreme abuse. The director has said as much in interviews, even saying he really doesn’t have an interest in Monroe or her movies. If that’s the case, why on Earth would you make this movie?

Blonde is getting a ton of headlines as Netflix’s first (and probably last) NC-17 movie. Even as someone who desperately wants a better infrastructure in place for more boundary-pushing art, I can’t say Blonde makes proper use of its rating. In addition to her apocalyptic daddy issues, Norma Jeane has multiple pregnancy complications, which culminate in a few rough abortion scenes. However, what pushes them over the edge are a few gratuitous shots (you’ll know ’em when you see ’em) that could have been taken out entirely and would have left the gruesome nature of those scenes intact. The other culprit is a sequence involving JFK which, probably speaks for itself. It sure is something!

Whenever Blonde chooses to push the envelope, there never seems to be a thematic purpose behind it. Frankly, I glazed over after a while. I don’t really get offended by such material, but I most certainly get bored!

That brings us to Ana de Armas, who is unquestionably game as Norma Jeane/Marilyn Monroe. She definitely transforms into the role, throwing caution to the wind and giving in entirely to Dominik’s vision. (Which, as I’ve made pretty clear so far, is pretty limited.) I found myself really feeling for de Armas. It’s a seriously vulnerable performance, and it doesn’t seem like Dominik has any interest in supporting it with proper material. She sure can cry, but the hysterics she’s going for don’t amount to much in the grand scheme of things. Plainly, it’s very one-note, because the writing makes it so. A lot of effort is put into the duality between Norma Jeane and Marilyn Monroe, but I implore you to find an interesting thought created between the two of them. The one humane interaction she gets is with Adrien Brody’s Arthur Miller (who is terrific in his limited screen time) in which their romance sparks as Norma Jeane offers a layered reading of one of his characters that is a representation of his previous lost love.

Ultimately, Norma Jeane is all trauma and no agency, defined by bad parents and her overwhelming desire to be a mother. It’s not shocking that this non-reading of a female character comes from a director whose other movies are almost entirely filled with men. It’s cartoonishly simple. Especially when there’s so much to pull from Marilyn Monroe’s life for a movie, including plenty of times when she challenged the status quo. So much of Marilyn is left out, and it doesn’t seem like any thought was put into how to fill the gaps.

As a work of historical fiction, it’s totally acceptable for a movie like Blonde to bend the facts or leave things out entirely; it seems like Dominik is more interested in blending Marilyn Monroe’s iconography with ideas about how we treat female celebrities in a general sense. But even so, Blonde removes Monroe’s individualized dimensionality for…nothing.

As the dust settles and the initial takes that are sure to overwhelm every corner of Film Twitter begin to subside, I don’t doubt that there may be a time when Blonde is re-considered as a misunderstood classic. Its impressionistic style is too accomplished for every kind of film fan to ignore, or for them to infer meaning where there is none. But I will certainly not be jumping on that bandwagon. As I get further away from my viewing, I find Blonde an unrelentingly cruel self-parody.

Thank you for reading! What are your thoughts on Blonde? Comment down below!

[…] Patrick’s old diaries that a nurse has dropped by, along with some other belongings, and the past begins to unravel, where all her deepest fears of her marriage rise to the […]

Such wasted potential. I feel like, either do a biopic, or make up a fictional story. This type of hybrid does nothing but create a false narrative of an icon’s life. I’ve seen several reviews/reactions where people are taking this film as Gospel. And that’s a problem. A disclaimer would’ve been nice.

At best, I found this more to be a portrait. As noted, even the source material is fictional and not meant to fully represent her life, nor is it a biography, which I found many others seem to see it.
The best description I’ve heard is that this is more a horror movie with cruelty being the menacing element.

Sad stuff. I don’t know how many bio pages (Judy Garland’s for example) I’ve read from that Great Depression era where the father abandons the family, and they end up with a hand to mouth existence. The experience seemingly driving the starlet in question.

The one thing that came to my mind in later years was Marilyn’s insecurity about her acting. Compared to a lot of Hollywood’s melodramatic queens (Joan Crawford, Bette Davis), Marilyn did more than fine.