‘Glorious’: A Breakup, a Bathroom, and a Glory Hole of Cosmic Horror 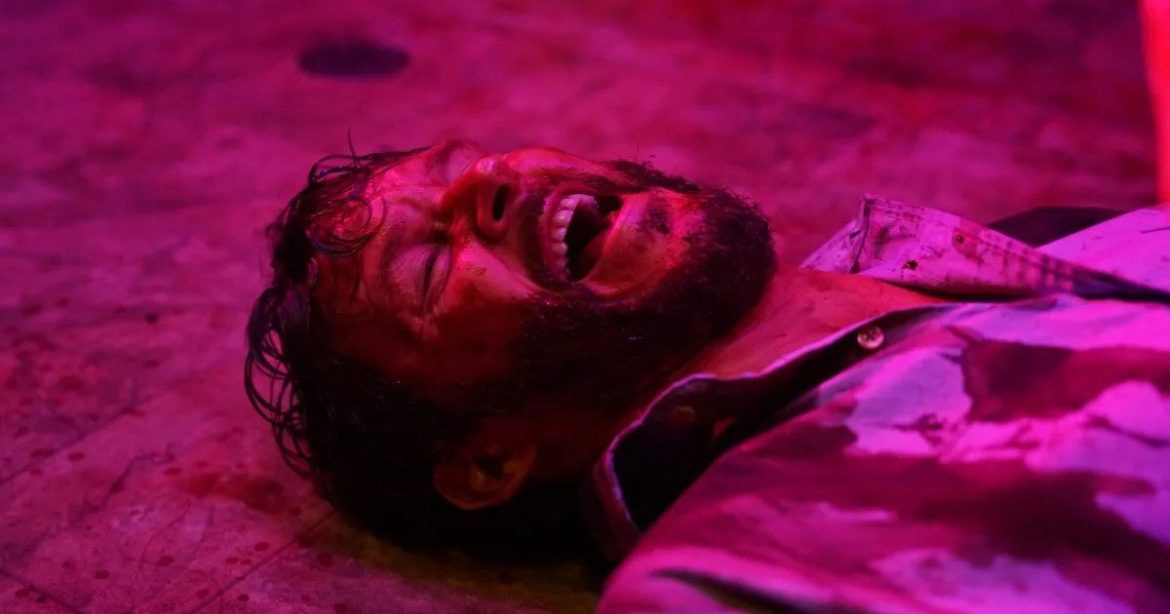 There have been many attempts to emulate Lovecraft‘s brand of horror in film. While some of these films are some of the best horror films ever made (The Thing, From Beyond, and Prince of Darkness — yes, I am double dipping on the GOAT John Carpenter), it feels like no film I have seen yet has a filmmaker who completely nails the Lovecraft style. Lovecraft mostly wrote about the horror of beings or things that go beyond our human understanding, and in many instances, that horror would drive any human mind insane simply by looking at it. Lovecraft’s very specific brand of horror is nearly impossible to adapt because, in order to utilize the visual medium, it is very difficult not to show the threat.

This is a long-winded way for me to say that Rebekah McKendry, the writer/director of Glorious, and a literal expert on the genre of horror with a Ph.D. to prove it (with some great podcasts that you should definitely check out), comes about as close to the Lovecraft brand of horror as any filmmaker I have seen, even if I am walking away ultimately mixed on the film.

Glorious follows Wes (Ryan Kwanten), a man who has recently gone through a breakup and is driving to an undisclosed location with many of his belongings. After falling asleep at the wheel and having a close call with a resulting accident, Wes stops at a rest stop, gets drunk, and passes out. The next morning he awakens hungover and quickly finds himself kneeling in front of a toilet purging his body of his mistakes of the previous night. Shortly after, a voice comes from the stall beside him (through the glory hole in between the stalls) and soon reveals itself to be an Eldritch God (voiced by J.K. Simmons) who informs Wes of an impending doom for the human race.

Glorious is a mostly good movie. The strongest element of it is the premise which is really fun and unique. This is certainly a bottle film, and it utilizes its single location pretty well. The film is brisk, less than 80 minutes long, and I thought it was able to keep the environment fresh and interesting for that time. I really enjoy the idea of this cosmic horror scenario happening in a rest-stop bathroom to some random, hungover dude. Glorious also does a pretty good job at raising the stakes and keeping the premise going for its runtime.

I’m mixed on the lead performance by Ryan Kwanten, but some of that has to do with the character he is portraying. Wes comes off as a pretty big asshole, which is fine until you need to be invested in what he is going through. Of the little bit of story we get about this breakup, he is easily the less sympathetic party. With the threat of the impending annihilation of the planet Earth/human race, I was almost rooting for the threat and didn’t find myself caring too much if Wes made it out of the situation.

J.K. Simmons’ voice performance is really entertaining. It isn’t the type of voice you would generally associate with a threatening galactic evil, but that subversion is super fun. He is effective at being friendly, funny, and ultimately threatening. It’s a solid performance from an incredibly versatile actor.

The comedy in Glorious is pretty hit or miss. I will start by saying there is a setup and payoff in this film that is hinted at with the title and the setting that is built up to for a significant amount of the runtime. It is essentially all buildup for a punchline, which is hilarious. It’s really funny and well-planted. However, other than that single joke, Glorious‘ comedy isn’t entirely effective; in some ways, the comedy undercuts the horror. Had the comedy been a little bit sharper, this would be less of a problem.

I come away from Glorious feeling largely mixed. The premise is enjoyable and unique, and I love me some good ol’ Lovecraftian horror. However, there are elements at play that hold me back from saying this is a must-see horror film. As I said earlier in this review, Rebekah McKendry is an incredibly knowledgeable individual about the horror genre, far more knowledgeable than me. It is very clear that she understands and loves the genre. While I am not over the moon about this film, I had a good time with it and you can sign me up for whatever McKendry does next.

Thank you for reading! What are your thoughts on Glorious? Comment down below!

‘The Tomorrow War’ Offers a Lot of Action,...