You've seen it many times before, but that doesn't mean it's not entertaining. 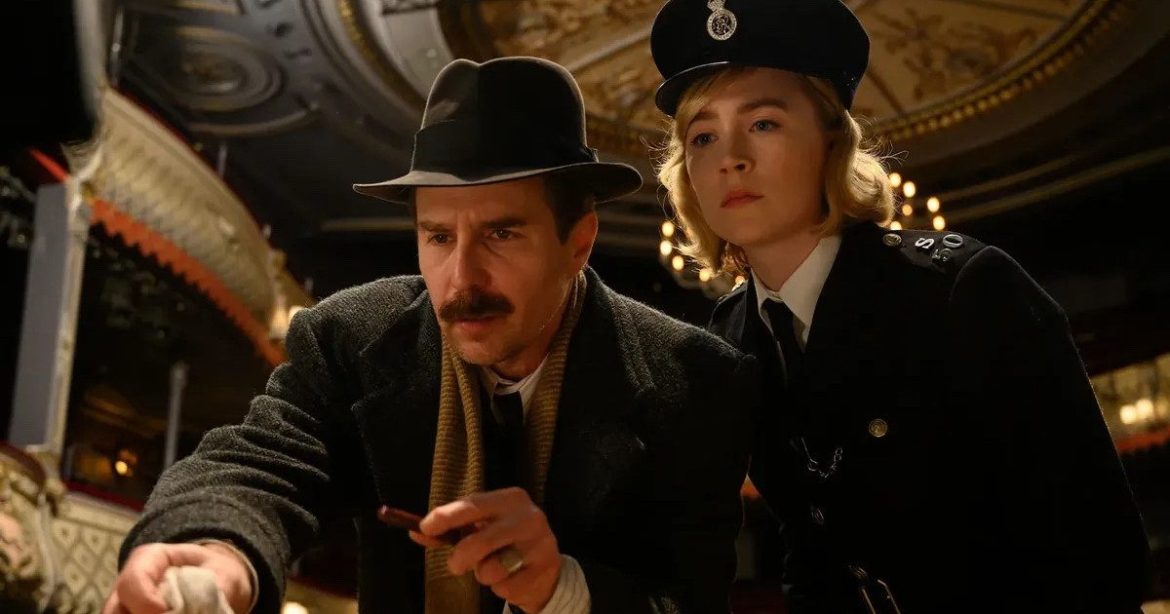 “It’s a whodunnit. You’ve seen one, you’ve seen them all,” is a line heard more than once in Tom George’s directorial debut, See How They Run. Perhaps there is some truth to that, but that doesn’t mean this self-aware romp isn’t worth your time.

It’s 1953, and blacklisted American film director Leo Köpernick (Adrien Brody) is in London to begin work on a film adaptation of Agatha Christie’s beloved play, The Mousetrap. He is not a well-liked man, to say the least. When he turns up dead on a sofa, center stage, no one is too broken up about it.

Enter Inspector Stoppard (Sam Rockwell), and Constable Stalker (Saoirse Ronan), tasked with finding out who murdered Köpernick. The hard-drinking and somewhat jaded Stoppard isn’t too thrilled to be paired up with overly-enthusiastic newbie Stalker. This mismatch of personalities, and investigative styles, is this movie’s main source of comedy and conflict.

Both Rockwell and Ronan give good performances as the investigating officers. Rockwell dons a pretty convincing English accent, as well, even if he occasionally sounds just like Captain Jack Sparrow. Ronan is charming as ever, and really made no missteps here. Even so, I found two other characters far more captivating than the leads.

The movie’s most entertaining bits were those featuring the aforementioned Leo Köpernick, and the fabulous Mervyn Cocker-Norris (David Oyelowo). Their scenes together were especially good.

As Köpernick is murdered about five minutes in, most of his scenes are shown as flashbacks. Brody seems to be having a blast playing this cad, and it’s infectious. A scene where he is presenting a storyboard of his ideas is downright charming, even though Leo is not. Brody seems to have a knack for making his characters at least a little likable, no matter what they do.

Oyelowo shines brightly in his role as playwright/screenwriter Cocker-Norris. He has a presence that is hard to compete with. He’s a total scene stealer. His character was used exactly the right amount, as well. Enough to be a bright spot, but not enough to grow tired of him.

While I did enjoy this movie overall, there are some things I’d change. Mainly, the pacing. The first few minutes go by in a frenzy of action and humor, and then… we kind of grind to a halt for a bit. There’s a section involving Stoppard’s supposed dental appointment (really a pub visit) that especially drags on. For a film with such a short run time, this is surprising. Too much time is spent on this section where nothing really happens, and not enough time is given to other situations.

This movie shines its brightest when it virtually acknowledges it’s a movie. It pokes fun at moviemaking and filmmakers. Characters deride the use of flashbacks, car chases, and explosions, while the movie employs all of the above. It’s really a lot of fun, even if some of the jokes result in groans and head shakes rather than laughs.

My main gripe with See How They Run is that several characters (and their actors, of course) are underutilized. When these characters are in danger, the stakes don’t feel very high, because the audience hasn’t grown attached. There hasn’t been enough time.

That is a shame, as many of the players seemed quite talented and interesting, in the little time they were given. This is only a 98-minute movie, though, so perhaps a longer runtime would have created more room for them.

An actor in the underused column is Harris Dickinson, perhaps best known for The King’s Man, and the recent Where the Crawdads Sing. He plays a fictionalized version of Richard Attenborough here, and is entertaining. He just isn’t given a lot to do.

Another is Shirley Henderson, who briefly appears as a fictionalized (and hilarious) version of Agatha Christie. One of the movie’s biggest laughs (at least at the screening I attended) is courtesy of her character’s actions, and a little more of that would have been lovely.

In case you didn’t know, Agatha Christie’s The Mousetrap is a very real play, and has been running in London’s West End since 1952. It was forced to close temporarily in 2020 due to the COVID-19 pandemic, but reopened in 2021. It is the longest-running play in history.

As mentioned in See How They Run, there is indeed a clause, written by Christie herself, that states a film adaptation cannot be made until the play has been closed for at least six months. This movie’s filmmaker characters are waiting with bated breath for that day to arrive.

And yes, Richard Attenborough and his wife Sheila Sim (played here by Pearl Chanda) really were in the play’s inaugural cast.

If you want to sit back and be entertained by something light, charming, and fun, See How They Run fits the bill quite well. Is it Oscar bait? No. Is it exceptionally original? Also no. However, you will let out some genuine chuckles, and have an escape for an hour and a half or so. And sometimes, that’s all you really need.

Thank you for reading! What are your thoughts on See How They Run? Comment down below!

Has ‘Moon’ Stood the Test of Time After...

Important Lessons to Take From ‘The Brothers Bloom’