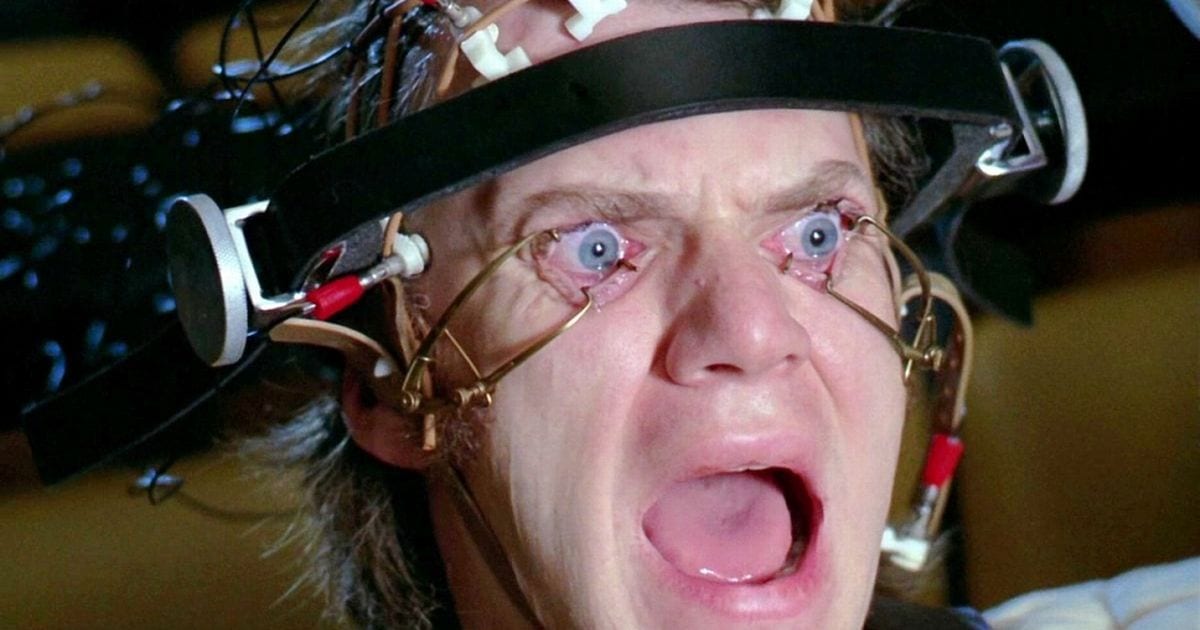 You could check out the trailers for each movie, but we recommend going into these as blind as Matt Murdock for full, eye-popping impact. So, (in your best Joker impression), here we go . . .

A pregnant widow, still reeling from the death of her husband, is stalked by a scissor-wielding psychopath in this terrifying, almost-impossible-to-watch horror from French filmmaking duo Alexandre Bustillo and Julien Maury (Leatherface).

In short: a woman wants what’s inside a pregnant woman’s belly. Need we say more?

image via The 13th Floor

Another slice of psychopathy from France, this polarizing film directed by Pascal Laugier (The Tall Man) is, much like the reaction to it, split in two halves. Two victims of child abuse search for the people responsible, but this quest for revenge leads them to something even more terrifying than their past experiences.

Psst – the early scene in the family home will have you spitting that thirst-quenching beverage all over your neighbor. (This will be a fun side-effect of watching the film. We recommend cola; something sticky). Oh, and look out for a young(er) Xavier Dolan who has a small role in the film.

‘Gore, gore . . . Gore!’ shouted a fervent Paul Heyman (for all you wrestling fans out there). And it would be perfectly apt for you to scream this at your TV screen while indulging in Peter Jackson’s (West of Memphis) ‘a million miles from LOTR’ cult classic, Braindead. Not only is this extremely visceral, it’s also belly-achingly hilarious. So, while being somewhat disturbing due to its high level of blood ‘n’ guts, it’s much more affable than the French frighteners previously mentioned.

Note: If you enjoy a good ol’ custard desert, you may want to steer clear of this one.

This is probably too obvious, or not obvious at all. The films previously mentioned have all been more on the . . . let’s say blood-spattered side of the celluloid. Stanley Kubrick’s adaptation of Anthony Burgess’s somewhat inaccessible (for some) dystopian novella of the same name shocked audiences in the early 70s with its disturbing and violent images (most notably a scene of sexual violation accompanied by the protagonist’s rendition of Gene Kelly’s Singin’ in the Rain). Touching on a range of socio-political issues, this was, and still is, bold and brave (and beautiful) filmmaking, presenting us with the disturbing realities of the human condition.

For any of you who like your genitalia (which we imagine is most of you) this one may be a film too far. With indisputably fearless performances from its leads Charlotte Gainsbourg and Willem Dafoe, and an opening scene as beautiful as any in recent memory, Lars von Trier (Melancholia) presents us with a couple grieving the death of their infant child. The mother, in particular, has taken it hard, and she retreats into the woods with her professional therapist husband in a bid to tackle the grieving process in a more secluded and peaceful setting. Needless to say, this doesn’t quite turn out exactly as the husband had planned, and what follows is psychosis and self-mutilation, which isn’t the most pleasant experience, as you can imagine.

This one’s certainly not for the squeamish. But it’s well worth a watch for von Trier’s bold direction, the beautiful cinematography by Anthony Dod Mantle, the phenomenal performances by the lead actors, and the talking fox (because who doesn’t want to see a talking fox?). It’s told in reverse, the camera swirls like a maelstrom, there’s a sexual assault scene that lasts several minutes, and a man’s skull is brutally caved in with a fire extinguisher. Yes, this truly is a disturbing film that’s difficult to watch. Gasper Noe (Love) delivers this unpleasant and shocking, yet equally beautiful and affecting mystery-thriller with a score composed by one half of electronic maestros Daft Punk. The non-linear narrative follows two men (Vincent Cassel and Albert Dupontel) as they track down the person who brutally raped Cassel’s girlfriend (Monica Bellucci). With the nauseating camera movement, the violence, and the traumatic scene of sexual abuse, this one will stay with you for a long time after the camera swirls away into the empyrean.

So there you go – some f’d up films to add to your list if you haven’t seen them already. Of course there are many, many more we could’ve included, but hey, feel free to mention some of your favorite messed-up movies in the comments below!

Thanks for reading! What did you think of Six Picks #1?  What are your favorite f’d-up movies? Comment down below!

Funny Games is the film I always think of when it comes to this sort of topic.

Good call. The original or the remake? ;)

Well, I actually saw the remake first so perhaps I’d lean towards that. Not that it really matters. ?

Indeed it was… and quite stunning.

Antichrist was certainly something else. The first scene was….interesting to say the least.

Indeed it was… and quite stunning.

Yes it was! It reminded me of a piece of art. It really was stunning!

I’ve been meaning to watch A Clockwork Orange for a while (a friend recommended it), but I still have not. But after reading this, my interest weirdly enough peaked. I love this list, I’ll definitely be adding them to my suggestions!

Glad you enjoyed the article – thanks for checking it out. And report back with your thoughts on A Clockwork Orange! In my humble opinion, it’s a masterpiece. Up there with the greatest of all time.

I remember seeing Irreversible and Antichrist on a double feature screening and a fascinating thing happened… if you watch Irreversible first, Antichrist instantly becomes a comedy. I swear I haven’t heard laughter like that in a long time, I think because we had all just made it through Irreversible and so Antichrist felt like it was a cake walk in comparison.

You know I can kinda understand that. After watching Irreversible I think a lie down is in order, not another film! Antichrist has some seriously beautiful moments, though, and those performances are something else.

The most disturbing movie I’ve ever seen is “A Serbian Film.” Literally took me days to get over it.

So my brother keeps telling me. I’ve been meaning to watch it – thanks for the reminder!

I’ve always had a soft spot for Requiem For A Dream. Obviously not as outright gory as some of the above films but psychologically and emotionally it will break you down.

I agree with that one! Requiem is so unbelievably unsettling!

Good call. Watching Requiem is certainly a harrowing experience. We watched it as part of our film studies class in college; the expressions on faces afterwards said enough! But a stunning film. Ellen Burstyn is phenomenal, too.