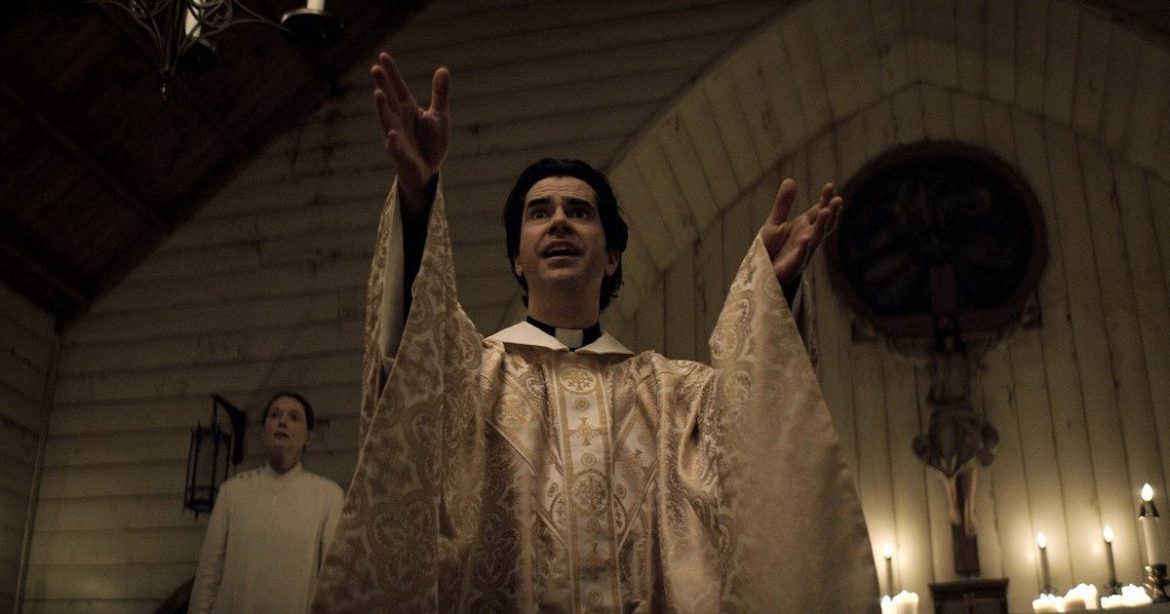 I sat down today to write a review for The French Dispatch. Or the Last Night in Soho. Or Dune. Something new. Something in the zeitgeist. Something the SEO algorithms would have been really proud of me for talking about.

And then I thought, “Hey, remember that Netflix show that came out two months ago? The one with poor marketing that just kind of dropped and then disappeared from the public consciousness? I wanna talk about it.”

So welcome to my review of Mike Flanagan’s Midnight Mass.

But since you’re here, I’m not going to waste the chance to tell you just how astounding this film is.

Flanagan, whose mastery of deeply intimate portrayals of trauma and guilt have been increasingly well-received, has been developing this project for years (references to characters from Midnight Mass can be seen in earlier Flanagan projects like Hush and Gerald’s Game). Throughout the last half-decade or so, Flanagan has become an increasingly recognized master of the horror genre.

However, the projects he’s been gaining recognition for recently have been adaptations of other people’s work. Watching his growth as a storyteller progress through these long-form tales has been certainly rewarding! But it seems only natural for him to take that next step and develop a project of wholly original material.

I am so thankful that it was this.

Midnight Mass is rich in theme, as has come to be expected from Flanagan’s Netflix partnerships. It tackles religiosity, cult think, and the failures of well-intentioned people. In particular, it wants to focus on those who excuse terrible things on the grounds that they might bring relief to their own loved ones. To portray in detail how well the show develops each of these themes and intertwines them would require far more words than I have here, but I will do my best to highlight some aspects of the plot and characters that I found captivating.

Midnight Mass follows a small (and largely Catholic) fishing community living on a New England island that has seen much, much better days. The population has dwindled due to a lack of resources and an oil spill several years before the beginning of the series. By the time we meet the residents of Crockett Island, their numbers are measured in the dozens.

Main character Riley, played by Zachary Gilford, returns to the island to live with his family after having gone to the mainland to make his fortune as a stockbroker. His dreams were cut short by a drunk driving accident in which he kills a young woman and spends the next several years in prison, returning home to make amends with his family. Upon arriving home, he learns that there are two newcomers to the island as well:

A new priest, replacing the island’s dearly beloved Monsignor Prewitt, and his own high school sweetheart, one Ms. Greene, the island’s new grade school teacher. The various relationships between the three of these characters will end up entirely defining the show. At the midpoint of the miniseries, in two extended monologues delivered in succession flawlessly, Riley and Ms. Greene detail each other what they truly and deeply hope the afterlife to be like.

Ms. Greene, a religious character herself, and Riley, aggressively agnostic, find peace with each other in this moment. The slow zoom utilized in this scene allows each of these actors the opportunity to deliver some of the more powerful dialogue in recent memory.

This seems like a good moment to sidetrack just a bit:

The most common negative criticism I’ve seen of this project has been that of the extended monologue. How the show has several moments where each of the main characters are given the opportunity to truly make a full feast out of a scene and deliver, for several straight minutes, some of the most beautifully written, poignant, and character-defining dialogue that we’ve seen in any medium in years. To those with that complaint, I offer this rebuttal.

Shut up. Just shut the heck up.

It’s not supposed to be realistic! It’s a 7-hour long religious allegory about a vampire and it has an entire 9-minute long, one-take scene that features several hundred dead cats. The monologues are not a bug of the show, they’re a feature. Just because Tony Stark doesn’t fly in to interrupt with a quippy, Joss Wheedon-esque one-liner to undercut the emotional significance of what’s being portrayed on screen does not mean it’s bad writing. Let yourself feel something.

In fact, one of the longest monologues of the entire show is maybe the best piece of media I have seen in a decade.

In it, a child who was paralyzed by the town drunk during a shooting accident and subsequently confined to a wheelchair for her life, finds herself with the miraculous ability to walk again. And one of the first things she does is march to the house of the man who traumatized her, the man who has spent years in the bottle wracked with guilt and deliver one of the most powerful speeches I have ever heard.

I will probably not remember most dialogue from most films I’ve seen this year, but I doubt I will ever forget how “you reached through time, Joe Collie,” made me feel, and I challenge anyone to watch this show and tell me otherwise.

Anyway. Back to the review.

Villains? Never Heard of Her

Perhaps the greatest strength of the show is its refusal to give us a proper villain.

That isn’t to say there aren’t bad people, but the only “character” that would be, in lesser hands, the monster/villain of the story acts more as a catalyst for the events that follow. Aside from the (spoilers) vampire, the only other character that is truly despicable is the incomparably annoying Beverly Keane. Portrayed in such a way that truly makes her a relatable sort of evil, Bev Keane is the type of self-righteous, holier-than-thou “Christian”. Her greatest joy in life isn’t that Heaven might await her, but that Heaven might await her while others will be excluded from paradise.

Which brings me to the acting on the show.

Hamish Linklater nails the desperate earnestness needed for the role of Monsignor Prewitt.

Zachary Gilford’s quiet tragedy as Riley Flynn is remarkable. Certainly, not a performance I expected from him after The Purge films.

Kate Siegel’s Erin Greene has the layers of strength and vulnerability that we’ve come to love from her. Her run of compelling performances in Flanagan’s films only grows here.

But if anyone is the true stand out in the show, it’s Rahul Kohli as Sheriff Hassan. When you think of star-making roles, this is exactly what you would want. This is an actor I want to follow for the rest of his career. His delivery in every scene is above and beyond what is expected. The complexity in his portrayal of an Islamic single father in a small, tightly-knit Catholic community who just wants to protect his son and do right by people who clearly distrust him is heartbreaking.

I’m not sure what more can be said, what more praise I can lay at the feet of Midnight Mass. While it may not be a “film“, it is far and away the greatest cinematic experience I have had all year. I love it and will be coming back for many, many re-watches throughout the years. Honestly, if this review can steer just one person towards watching this triumph of a story, it will be worth the 1300 words put here on the page.

Thanks for reading! What are your thoughts on Midnight Mass? Comment down below!

I never watch or read horror stories but this one intrigued me enough–and hooked me quickly enough–to stick with it throughout. Thanks, Danny, for rebutting all the criticism about the long monologues. No surprise that people have complained, calling the show “talky,” given the three-second attention span that most folks have. I thought the monologues were brilliant and really made the show for me. Yes, it’s a visual medium, but open your ears as well as your eyes, people! I was also very moved at the end when the incredibly poignant “Were You There When They Crucified My Lord” was playing softly in the background. Beautifully done.

Agreed. I thought this was the best series/movie/anything on a screen I’ve watched in many years. It’s a true work of art.