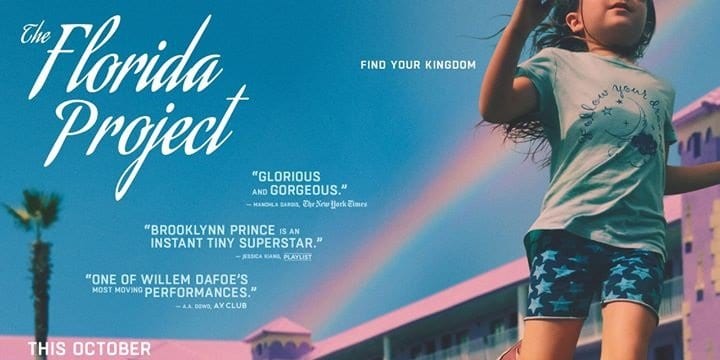 As A24 continues to ramp up distribution on unique projects, another one of their properties, The Florida Project, continues to receive awards consideration from multiple governing bodies.  Whether it goes on to win countless awards remains to be seen, but The Florida Project is destined to become one of the most distinctive movies of 2017.  The following review will be spoiler free. 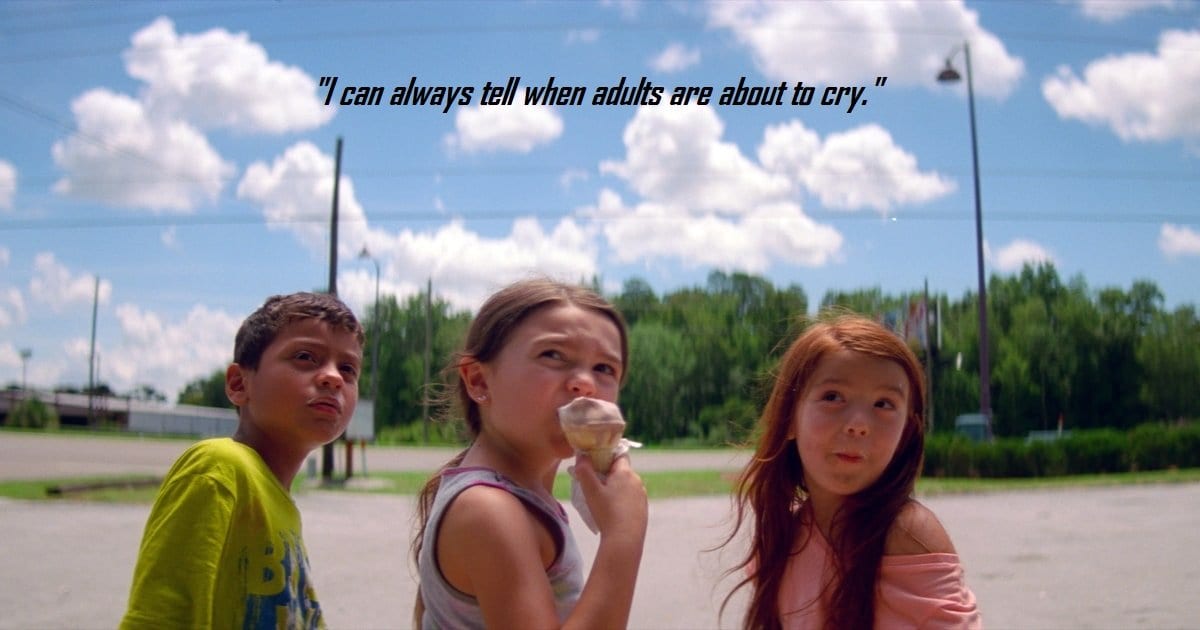 In the Orlando area, Moonee (Prince) and her ragtag group of friends are enjoying their summer by terrorizing fellow residents of their motel.  Obviously, they cause the manager Bobby (Dafoe) to consistently pulls his hair out.  Still, he does his best to look out for the children since Moonee’ s mother Halley (Vinaite) doesn’t exactly provide the most nurturing environment.

Unable to find steady employment, Halley struggles in providing a structured lifestyle for Moonee.  Regularly, she leaves Moonee and her friends alone to roam free, which gets the kids into some trouble.

Director Sean Baker is developing a reputation for creating deeply human stories that defy normal film conventions.  The Florida Project does everything to further that attitude.

Sean Baker looks for a very specific aesthetic when casting for his films.  If he can’t find that aesthetic in any SAG member, he’ll search elsewhere.

In finding the part of Halley, Baker went to extreme lengths to find someone who could accurately represent the social group he wanted to portray.  Eventually, he found Bria Vinaite — by sliding into her DMs.  Baker was scrolling through Instagram when he found Bria showing off her new clothing line full of pot-inspired prints.  Once the two became in contact, Vinaite naturally thought it was a joke.  Yet, months later, Vinaite is now a serious actress, earning another role in an upcoming Harmony Korine film.  They say that films with lower budgets have to get more creative, and there’s no doubt that Baker went the extra mile with The Florida Project.

The Florida Project contains performances that are far from normal — and the film is much better for it.

The real standout here is seven-year-old Brooklynn Prince.  Also appearing in her first major film, Prince is everything you’d imagine from a child of her age.  Given little structure from her mother, she roams free through the seedy areas of Orlando, causing a ton of issues.  But, once adults take a look into that adorable face, they know she isn’t acting out of malice.  Watching her and her little friends is truly like watching kids at play outside.  They’re adorable — but if you leave them on their own, they’re quite dangerous.

However, considering that many of the actors come from little to no background in the industry, the true star of the film is director Sean Baker.  For this movie to work, Baker needed to clearly express the nature of the scene to people that have never acted before while trusting them to perform naturally.  Whether its acting or not, Bria Vinaite displays the desired social class, expressing it with every move.  In fact, her performance is eerily accurate.

And then there’s Willem Dafoe, acting as a human corral as he tries to contain everyone that lives at his motel.  He becomes frustrated with the hoops he has to jump through as the manager.  However he takes it upon himself to take care of his residents — even if they treat him poorly.  He knows that if he forces them out, they might not have anywhere to go.

The Florida Project is that rare movie that earns the description of “too real.”  Combined with super realistic performances is a setting that hardly ever appears in major Hollywood releases.  Typically, the Hollywood version of Florida is a beautiful beach filled with beautiful people.  The Florida Project, on the other hand, captures an area of the state that is far from glamorous.  Adults struggle to pay the bills, resorting to reselling items in hotel parking lots.  There’s violence, drugs, and much worse items.

Unlike the typical Hollywood view of poverty-stricken individuals, there’s nothing to romanticize in The Florida Project.  The film is shockingly grimy, getting under your skin very quickly.

Sean Baker wonderfully contrasts the seedy environment by setting the film in the literal shadow of Disney World.  Just outside the “most magical place on Earth” is a gross undercurrent.  With this setting, the film becomes more than a charming look into the oblivious nature of childhood.  The Florida Project becomes a strong social commentary that defies convention.  Sean Baker adds a ton of layers to this discussion, most notably its beautiful cinematography.

The Florida Project cherishes the everyday experiences of its characters, showing their routines to the point where it becomes melodic.  But, after its point is clearly made, The Florida Project continues for a beat too long.  As a result, the film’s pacing slows as it reaches its end, feeling every bit of its 111-minute run time.

But, slow films are forgiven if they contain a thought-provoking, well-developed message.  The Florida Project certainly accomplishes this task.  However, it succumbs to an odd choice in its final moments that is never truly setup beforehand.  Its message is well-intentioned, but the film slightly undercuts its style and subtlety with an awkward finish that’ll leave some scratching their head.

That being said, The Florida Project continues to be fascinating in its ambition and shortcomings — 99% of films do not fall under that distinction. It begins to feel its length in its third act, but The Florida Project is still one of the most hyper-realistic films of recent memory.  Director Sean Baker continues to capture deeply human moments with ease.  The film catches the naive bliss that comes with childhood, showing incredibly silly moments that are unabashedly cute.  However, when combined with scenes that all too accurately represent parts of society that are hardly ever shown in film, The Florida Project becomes a deeply affecting commentary on social class discrepancies.

Thanks for reading!  What are your thoughts on The Florida Project?  Comment down below!

[…] for Frankie Corio, there hasn’t been a child performance this good since Brooklynn Prince in The Florida Project. The pair is marvelous […]

Definitely seek it out! It’s a good one!

100% agree! Authenticity at its best. Didn’t need to be overstated, just told.

Absolutely! There was nothing that felt like a movie in this one, except for maybe the last minute or 2 ?

Can’t wait to watch this film! Being looking forward to it for two months now!

It’s a great one! I hope it’s close to you somewhere, it’s hardly in any theaters anymore

I agree with everything you so eloquently say about this film! I’m sure if the ending wasn’t so abrupt, you would have given it an A+!

Honestly, I probably would have! I just the guerilla filmming tactics so bizarre and it just didn’t agree with the rest of the film. But hey, I’m sure many people loved, some in my theater sure did!

Thanks! I’ll be on the lookout for this one!

Definitely look for it! It’s probably leaving theaters soon (it’s only in 37 around the US) but it should come to on demand and things like that soon!