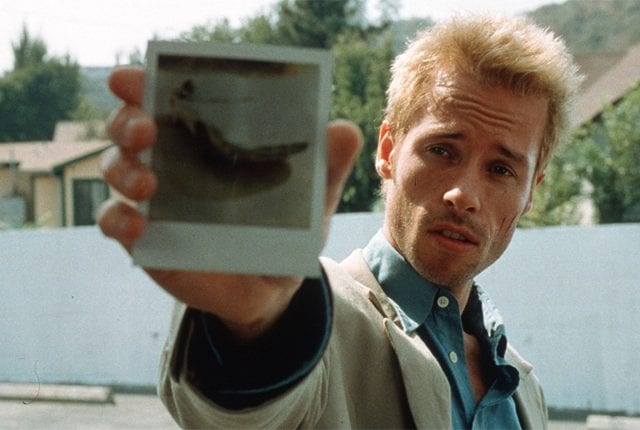 Christopher Nolan has become one of the best directors working today.  Each of his films have become events at the theaters in recent years.  Although he’s predominantly known for his work on The Dark Knight trilogy, he has done arguably better work on other projects in his career, creating a filmography that still does not have a major blemish.  So that you may expand your knowledge of Christopher Nolan, let’s take a deep look into the film that put him on the map, Memento!  The following review will be spoiler free.

We follow Leonard (Pierce) who is attempted to find the man who raped and murdered his wife.  However, Leonard was severely beaten by the culprit and now cannot retain any new memories as the blow crippled his short term memory.  As a result, Leonard must rely on copious note-taking (some of which has been tattooed onto his body) in order to track down the man who he believes is still on the loose.

Before Christopher Nolan was a household name, he primarily worked in smaller projects.  He focused on creating great characters since he had much lower budgets for his films.  After his first film, Following, was a success in the independent film realm, he quickly tackled his next, and arguably most inventive film, Memento.  It is often noted that Memento was the movie that gave Nolan the opportunity to direct The Dark Knight franchise.

One thing that I’ve always appreciated about Nolan’s films is that they are all technically brilliant.  Each one of his films are beautiful, capturing the landscape perfectly while displaying excellent camera work to allow the emotions expressed on screen to be resonant.  Whatever the budget or setting, Nolan finds inventive ways to tell a story that moviegoers everywhere can latch on to.

Memento may be the best example of Christopher Nolan’s abilities, as it is truly an extraordinary film.

Nolan is squarely the star of Memento as the film’s direction is out of control good.  For those unaware of the film’s structure, Memento tells its story by starting at the two extreme ends of the film (the beginning and end) and proceeds to move closer to each other until each story arc meets in the middle.  The scenes that come before the middle divergence of the story lines are displayed in black and white while the scenes that are after the divergence are in color and played backwards (i.e. each subsequent scene in the color story line occurs chronologically before the previous scene).  The film also cuts back and forth between these story lines.

Now that explanation of the story structure may have made the film sound muddled.  Luckily, Nolan toes the line with ease.  He cuts the scenes together to allow us to catch on to the structure with ease.  The construction of each scene allows for you as the viewer to get invested in the events of each scene without the movie flipping back and forth too quickly, thus making for a movie viewing experience that is unlike any other.  In the wrong hands, Memento could have been an incomprehensible slog that would do more to anger than entertain, but Nolan directs this film to a tee.  With his poised directing abilities, the structure of Memento helps to power the rest of the film’s elements to create something that is abundantly satisfying.

However, Memento does not reach its level of critical praise without a committed performance from Guy Pierce.  A character who has a psychological ailment can be a tough role to get a handle on for an actor.  Thankfully, Pierce is incredibly enthralling, as he even switches from fully aware of the situation to knowing completely nothing after he loses his memory due to a loud bang or something else startling.  His mannerisms change instantly, making you truly believe that he suffers from this condition.  Determined in his actions yet sympathetic in his shortcomings, Pierce is the heart of Memento.

I give a ton of credit to Joe Pantoliano who plays the role of Teddy.  From the second he comes on screen, you immediately hate his guts as his character is so unbelievably slimy.  His manipulative nature is very reminiscent of his role of Cypher in The Matrix. image via The Cheat Sheet

Unlike many movies today, Memento is a character story with very few bells and whistles.  However, the script is so concise and compelling that you never once wish the film was filled with more special effects.  The way the story unfolds, you receive a little more context to the events of the film with every scene, causing you to become even more intrigued by the characters and their motivations.  After a great opening scene that actually flows backward in time, you are completely at the mercy of Christopher Nolan as you unravel his tightly wound narrative.

If you haven’t noticed by now, Memento is a very difficult movie to review without spoiling the most jaw-dropping moments of the film.  However, I will say is that way the two story lines come together is truly rewarding for anyone who watches.  It may be one of the best third acts ever put to film as it is wholly fulfilling and subversive.

In the end, Memento is an inventive film that is unlike any other.  It gets an A+.  I strongly urge you to watch this film the next time you’re looking for something to watch on Netflix.  It may just be Christopher Nolan’s best work, which, considering his filmography, is very high praise. Thanks for reading!  Have you seen Memento?  Comment down below with your thoughts!

[…] the surface, Memento and 50 First Dates don’t have much in common except for their main plot device of […]

I love Nolan films and though I thought Memento was clever, butI intensely disliked it for two reasons: 1. The protagonist took snapshots but he never had a calendar to map his memory loss issues and on a very personal note 2. It pushed my PTSD issues to the edge and triggered me. The film produced rage in me that was unbelievably over the top. NOT RECOMMENDED for anyone with severe PTSD issues.

That’s certainly a worthy reason for disliking it! I can’t really identify with that sentiment since I haven’t faced that issue, but it’s totally understandable!

I always like listening to other perspectives since film is such a subjective medium. It really helps to put things into perspective!

Well, now I know what I have to do tonight. I think its my second favorite Nolan film (after Prestige) but I’ve seen the Prestige about 6 times and Memento only twice. Gotta catch up!

I loooove The Prestige as well! It’s Nolan so you really can’t go wrong!

Going to watch it tonight. Thanks for the review.

You’re so welcome! Glad I could help you out!

Loved the movie back in the day. Nice review.

I watched this movie so long ago and have been meaning to do so again, but never got around to it. Now, I don’t think I can put it off any longer. Thanks so much for this!

I tend to think that this is my favorite movie most days, not enough people have seen this movie, and that saddens me. The twist is excelent, and it seems like everytime I watch it, I find another clue that I had missed. I need to watch it again.

It definitely is one of those movies that you find something different every single time!

Oh man, I saw a preview (not a trailer) for his new movie Dunkirk a couple of weeks back in the theatre. I tell you that preview gave me goosebumps all over while watching it. It was really that brilliant ? To tell you the truth I had more fun watching the preview than the movie that came after it lol. As for Momento it is actually one of the few films I have yet to see from Nolan. After reading this though, I have really gotten curious for it. Great post ?

Ohh man I’m so excited for it! Only a few weeks away

Memento is one of those movies that’s impossible to discuss without spoilers. Highly enjoyable and great to discuss with someone who has watched it. And agree, the direction is pretty amazing. Thanks for sharing your thougths on it.

You got it! I was really grasping at straws to write this one lol

This was the movie that introduced me to Christopher (and Jonah) Nolan’s brilliance. I remember first watching it, the reveal just blew me away. Great post!

Memento came along after I’d exhausted every David Lynch movie that had been released and I was starving for a movie that would challenge me. It blew me away and it’s still a riveting watch.

Prime example of a movie that stands the test of time!

This movie blew my mind when I saw it back when it came out. My husband fell asleep during it. I still haven’t forgiven him.

Lol! Have you gotten him to watch it since then?

Nope. He insists it’s a terrible movie since he truly almost never falls asleep if the TV is on.

I saw Momento when it came out and agree with your review. Between memory flashes, Leonard’s actions and the tattoos and notes, it’s a fascinating unfolding. Great review. Cheers

Thanks so much! It may be the most original film I’ve seen!

Well, it helps for me to be a Guy Pearce fan, too. Love him on the television series as Jack Irish. Cheers

I’ll have to check it out! I don’t think I’ve heard of that