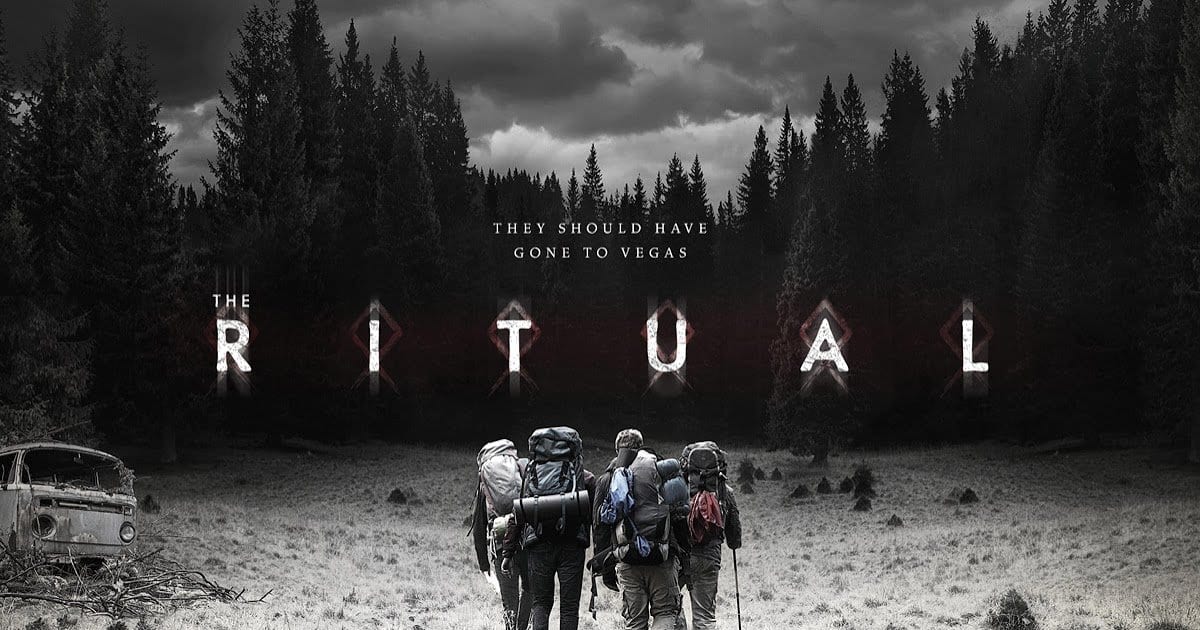 Netflix is beginning to release original films on a weekly basis, adding to its stronghold in the streaming market.  Its next film, entitled The Ritual, is a high-concept horror film that follows a group of friends backpacking through the Scandinavian wilderness.  If you’ve ever seen a forest-based horror film, you’d know that their trip doesn’t exactly go as planned.  The following review will be spoiler free. 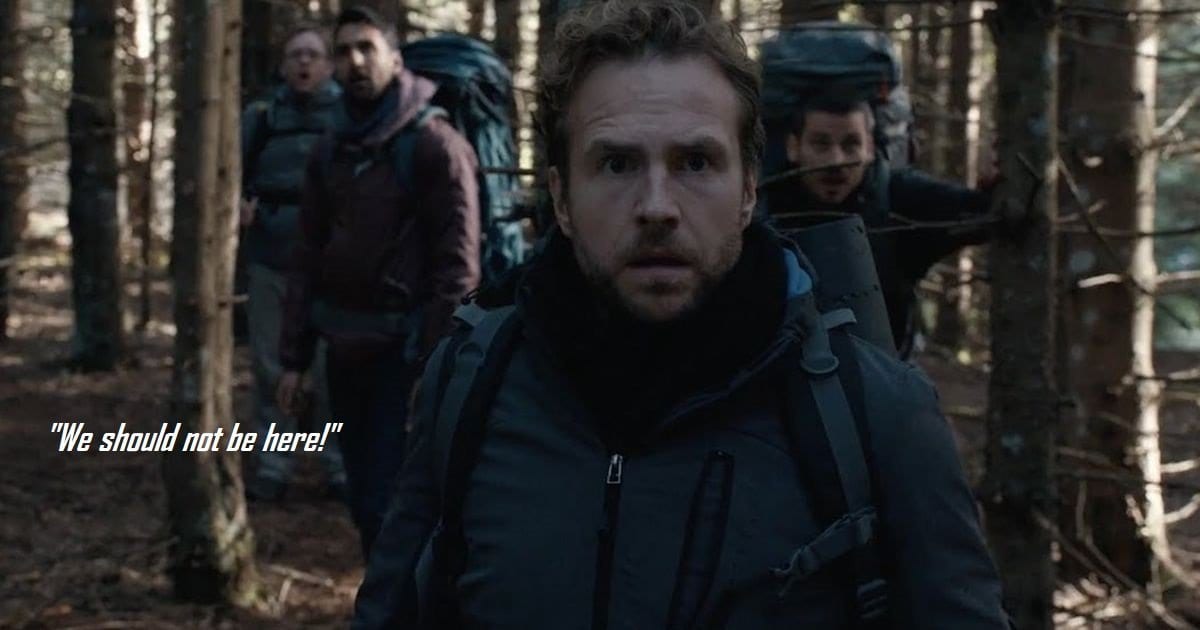 Following the tragic death of their close friend, four friends (led by Rafe Spall) honor his legacy by going on a hiking trip.  When one of the four individuals loses his footing and injures his knee, the group decides to make a detour through the forest to shorten the trip by a considerable amount.

As the group enters the forest, they begin to uncover some creepy markings and sacrificial fixtures that suggests that they are not alone in the vast forest.  As the group trudges forward, an unknown presence makes itself felt, putting the lives of the hikers at stake.

There’s no hiding that Netflix has had trouble with its original productions and distributions as of late.  In a mad scramble to grow its library, quality has become very hit-or-miss for many viewers.  With high-profile critical flops like Bright and The Cloverfield Paradox recently, many are beginning to wonder whether or not Netflix will become a dumping ground for poor films in the future.

However, Netflix’s purchases of films from prestigious film festivals have become the streaming service’s saving grace.  With films like Mudbound receiving strong praise and even awards consideration, it’s clear that Netflix can get it right.  Moving forward, it’s just a matter of minimizing those high-profile mistakes.

As for the film at hand, it isn’t exactly a massive production with a ton of eyeballs on it.  Even so, it does follow the trend of Netflix buying quality films from festivals.  After its initial release at the Toronto International Film Festival in September of 2017, The Ritual was quickly snatched up by Netflix for almost $5 million, beating out other studios like Lionsgate, Annapurna, and IFC, making way for a February release to subscribers everywhere.  The film may not have as much of a broad appeal as some of Netflix’s other releases, but executives hope that it would still aid in gaining subscribers as the constant pursuit of more marketable content continues for the streaming giant. The Ritual Creates a Creepy Feel that Relies on its Setting

Director David Bruckner proves himself as a quality filmmaker, showcasing how to properly set up a scary and tense moment.  Like 99% of horror films these days, there’s some jump scares thrown into the equation.  But, they never become nauseating.  Even better, there’s always a horrific image attached to these jump scares that have a lasting effect.  Unlike Winchester which contained a lot of loud bangs followed by a millisecond of scary imagery, there’s a memorable element to each jump scare that lingers on after the initial boost of adrenaline.

The Ritual follows a similar pacing to many horror films as it slowly ratchets up the pace to a full-on sprint at its finish.  Empirically, there’s nothing unique to The Ritual in this regard.  However, Bruckner relies on the quiet Scandinavian forest to create creepy imagery that is very effective, distinguishing the film from the pack.  Subtle movements and atmosphere covers the first two acts of the film, keeping you as the viewer constantly on edge.  While the landscape in undoubtedly beautiful, there’s a lack of color that makes everything feel stark and a tad sickly.  The Ritual never lets you feel comfortable, making its horrific elements much more impactful.

image via The National

Many who saw the trailer for the film called it a sleek rip-off of The Blair Witch Project.  In my opinion, that’s a gross simplification.  Yes, The Ritual takes place in the woods and involves a group of friends camping overnight.  Still, it creates its own path, diving into the mythology and mystery of the so-called “ritual” that diverts from the formula created by the popular found footage film.

The Ritual is a difficult movie to discuss without diving into spoiler territory, but the story takes a major turn that makes the film quite original (and personal).  Just when you begin to think that The Ritual is merely a tease, it goes all in, showing all of its cards while increasing the intensity and engagement level.  Unlike many films that have a feeling of mystery, The Ritual actually improves once it drops its facade.  It’s a rare occurrence that speaks to great writing and direction. 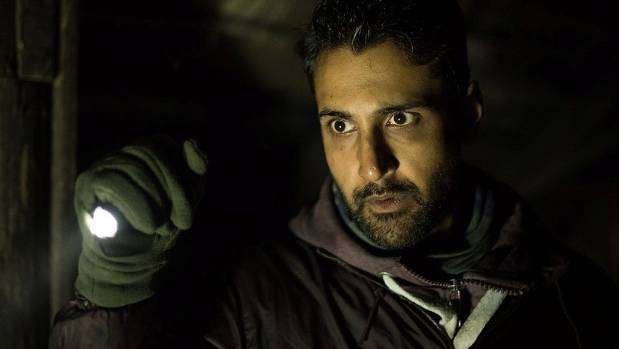 The Ritual Becomes Too Heavy-Handed

As The Ritual weaves through its surprised-filled narrative it becomes obvious that the evil force in the forest is attached to something that is very personal, showing that the movie goes beyond surface-level thrills.

In what is seemingly an attempt to make sure the audience understands its underlying message, the film borders on becoming exceedingly obvious, turning what could have been a subtle, intelligent look into grief and regret into a movie that is all too transparent in the end.  The Ritual calls upon a physical representation of the themes of the movie far too often, leaving you to say “okay, I get it!”

The four main characters are represented as genuine and decent human beings.  Because they’re trying to honor their friend by embarking on this trip, you immediately care about them in some capacity.  However, you never fully grasp their personal struggles aside from Rafe Spall’s character, making the entire film less impactful when combined with blatant themes.

It may get a little heavy-handed in its third act, but The Ritual is a very satisfying psychological horror film that balances symbolism with legitimately creepy visuals, making for a great watch.  Creating a mythology within the vast wilderness, The Ritual becomes more fascinating with every minute.  What starts out as a thinly veiled rip-off of The Blair Witch Project becomes something much more, blending elements of the genre for a bizarre finale.

Netflix might not have started the year off well with some of its more prominent releases, but The Ritual is great addition its horror library that many will declare a very pleasant surprise.

Thanks for reading!  What are your thoughts on The Ritual?  Comment down below!

'The Binding' Is the Perfect Example of Almost Everything that Can Go Wrong in a Horror Movie | MovieBabble October 13, 2020 - 10:11 am

[…] There is a lot of blood-curdling screaming in the background. Some people are getting ready for a ritual. Slowly, the camera moves to the spot where the screaming comes from. A woman in a white gown is […]

Great review. I watched it and it was pretty entertaining as in figuring out about their depths of their friendship between each other after what happened to their friend and also that creature.

Thanks so much! I think a lot of people will find themselves pleasantly surprised while watching it!

Great review. Now I’m intrigued! :) The trailer didn’t seem all that interesting, and I had almost dismissed it as a Blair Witch rip off too. Glad to hear that isn’t the case. There hasn’t been a genuinely good horror film for a while too.

Horror movies that creep me out from start to finish are some of my favorites. I love/hate the feeling of knowing something is up and having that feeling intensify throughout the whole movie. I’ll have to check this out.

You definitely should! It’s on Netflix so you don’t have to worry about planning your day around it. Plus it’s only an hour and a half so it’s a breeze to get through!

Oh nice! Even better. I find if horror movies get too long, I start to lose interest.

Especially since most of them are people creeping around which can get very tedious!

Your reviews blow mine out of the water, enjoyed the movie and the review.

How about a review of The Scent of Rain and Lightning

I would if I had the film to my disposal!

Watched this last night – a solid entry into the British horror canon. Bruckner’s direction is assured and creative. Atmospheric, unpleasant, and engrossing, with a strong, fluid screenplay and likeable characters. It could’ve been a great if it avoided certain familiar trails they wandered down :p B+ is a fair grade IMO. Thanks for the review.

You got it Shane!

I saw this film in the weekend and I really enjoyed it. My own review is ready to be published on saturday. It might not be a very original film, but exactly as you said, the atmosphere for this was really suspenseful, and it’s mythology certainly fun. This was quite an unexpected but fun little film ?? Great review ??

I’ll definitely keep an eye out for your review as well! The third act of this one recontextualized it for me into something that was super, super cool