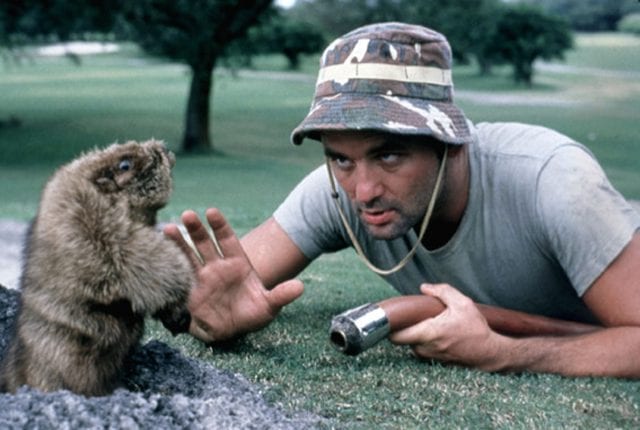 Sports movies have the ability to enthrall us while also making us feel really great.  With the Super Bowl festivities winding down, I thought it be a good idea to take a look at the times that Hollywood dipped its feet into the realm of sports and succeeded immensely.  This list was incredibly tough to construct (you may notice some glaring omissions).  Before I unveil the list, I must warn you that there may be some spoilers involved in the discussion of these great movies.  You’ve been warned!  Here’s a look at the best of the best:

#10: The Bad News Bears: Completely rude and profane, The Bad News Bears has lived on as a classic.  It has so many memorable characters headlined by a great lead performance from Walter Matthau.  The Bad News Bears’ formula has been copied again and again by Hollywood with numerous ripoffs and even a reboot.  However, nothing seems to compare to this timeless hit.

#9: Moneyball (2011): Moneyball is a fascinating look into the struggle to stay within heavily entrenched policies or branch out and try something radically different.  Although those who have some knowledge regarding the analytics movement in baseball may get more out of Moneyball than the typical moviegoer, the movie has enough great performances from actors such as Brad Pitt and Jonah Hill to be enjoyed by everyone.  The events of the film are definitely worth checking out as analytics has since seeped into other sports such as basketball and football.

image via The Federalist

#8: The Natural (1984): A strong cast headlined by Robert Redford, Robert Duvall, and Wilford Brimley helps The Natural transcend its cliches and become one of the better baseball movies to date.  You can’t help but feel for Roy Hobbs as continues his dream of playing in big leagues.  As soon as he carves his bat out of an oak tree, you want nothing but for him to succeed in his goals.

#7: Hoosiers (1986): Gene Hackman powers this seen before story of an underdog coming to prominence past the mundane into an instant classic.  The film, which was nominated for two Oscars, does what many other films have failed to do by capturing the sport of basketball with a sense of realism.  Basketball films in general are very challenging to make since it’s difficult to edit around actors who aren’t the most skilled players.  This fact gives Hoosiers a leg up on many other efforts.

image via Leadership With You

#5: Creed (2015): A surprisingly refreshing installment to the Rocky franchise, Creed builds on the success of past movies and brings us a layered, engaging new character in Adonis Creed played by Michael B. Jordan to watch moving forward.  Creed has some absolutely stellar fight scenes.  The best of which may be Adonis’ fight against Leo “The Lion” which is edited in such a way that it seems like one long take.  I still contend that Sylvester Stallone was robbed by not winning the best supporting actor Oscar as he brings a truly tear-jerking performance to his beloved character in Rocky.

#4: Bull Durham (1988): Kevin Costner brings it big time as a washed up minor league baseball player in a movie that’s focus is on the memorable characters and their interactions more than any other element.  Tim Robbins is hilarious as the dimwitted Nuke LaLoosh and makes the battle for Annie’s affections very palpable and engrossing.  Bull Durham easily deserves its iconic status.

#3: Caddyshack (1980): The king of stupid comedies, Caddyshack has lived on as one of the best comedies of all time.  It’s one of the best examples of an all-star cast in which every actor brought their “A” game.  The film is instantly quotable with stars like Rodney Dangerfield quipping with the best of them.  Caddyshack may not be the most compelling plot of any of the movies on this list, but it is definitely the funniest.

#2: Raging Bull (1980): Possibly Martin Scorsese’s best work, Raging Bull is definitely not as easy of a watch as other movies on this list, but it’s power simply cannot be ignored.  Robert De Niro as Jake LaMotta is so compelling, show us what can happen when a man falls from grace.  You’re sure to flinch every time Robert De Niro gets clocked with a right hook as well as when the film delves deeper into his personal life.

#1: Rocky (1976): The best underdog tale there is, Rocky is so popular that an entire city memorialized the character in front of one of the must see spots in the city.  We’ve seen countless parodies and imitations over the years.  But, nothing compares to the feel good nature that Rocky gave us.  On top of practically every moviegoer loving the film, the film was a massive success with critics, winning the Oscar for Best Picture.  Rocky shot Sylvester Stallone to super stardom, something that we can all appreciate.

[…] Sports movies can provide great insight into foreign cultures. Almost every country in the world weaves sports into its culture to some degree, even relying on them greatly to present a strong national image to the world. The latest film from documentarian Julien Faraut, The Witches of the Orient, shows the intersection of Japanese culture and volleyball admirably.  […]

[…] shot of “The Match”) are bringing some relief, there’s something else that could help. Sports movies are getting some run from the broadcast channels and now seems like the perfect time to revisit […]

It really does! I just rewatched Rocky the other day and it still stands up completely. There aren’t too many good sports movies anymore

Nice list. Not sure how I would rank them, but the ones on my list would be
Baseball: Major League, A League of their Own, Pride of the Yankees, Field of Dreams, Bull Durham, The Natural, Bad News Bears, 42, and Damn Yankees
Football: North Dallas 40, The (original) Longest Yard, and We Are Marshall
Golf: Tin Cup, Happy Gilmore, and Caddyshack
Boxing: Rocky and Raging Bull
Others: Miracle, The Big Lebowski and Rollerball

That’s twenty, and a lot of Kevin Costner. Thankfully, neither you nor I have Rudy on the list.

Thanks for following me

You got it! I’m glad you prefaced the Longest Yard to be the original since that reboot with Adam Sandler is gahbage lol.

and sandlot. . .my
list can now buy a beer

People are passionate about sports and they bring that same passion to their feelings about sports movies. You could have an endless conversation about this list – there’s so many good movies that haven’t even been mentioned in the comments (White Men Can’t Jump, North Dallas Forty, Friday Night Lights, He Got Game, Slap Shot, etc.). Likewise, you could have a similarly passionate debate over the 10 worst sports movies.

Couldn’t agree more! Everyone has their own opinion!

These are all great movies! I would have to say that Remember the Titans is my favorite one.

You can’t help but enjoy it every single time!

Great lost! The sandlot for sure is my go to :) and maybe field of dreams.

Those are pretty great too!

Hmmm I didn’t even think of Foxcatcher when I was making the list! I’d consider it a sports movie since the plot does revolve around wrestling, but I think there’s definitely a strong argument for it be viewed as a psychological thriller. I think I’d still keep these ten over it though!

Agreed, it leaves a stronger impression as a psychological thriller for sure. The Wrestler would have made my list, but then again, the sport is mostly used as a backdrop. So strictly speaking, Rocky would have to be my #1 too. And of course, the other 9 are equally solid choices!

Where is A League Of Their Own in your list?

It probably make it if I made a Top 20 list!

I really like Caddyshack and The Natural! I love sports movies with Kevin Costner, but I actually wasn’t in love with Bull Durham. Rather, I love Tin Cup and Field of Dreams!

Yeah those are two good ones. Like I said there was a surprising amount of movies to choose from

There’s definitely a lot to choose from, I wouldn’t knock you for those choices

Yeah I’m realizing how much more difficult it is picking a Top 10 now thinking more into it.

Lol there’s a lot of them!

Great list. I have to say Remember the Titans would be number one on my list as it one of my favourite movies of all time. I now need to see a few of the movies on your list now. I recently watched 42 and thought that was a really well made sports movie.

42 was one of the one’s I had to unfortunately leave off. That and Miracle were tough to keep off the list

The other one I just thought of that is great is Coach Carter. One of Samuel L Jacksons great roles I believe