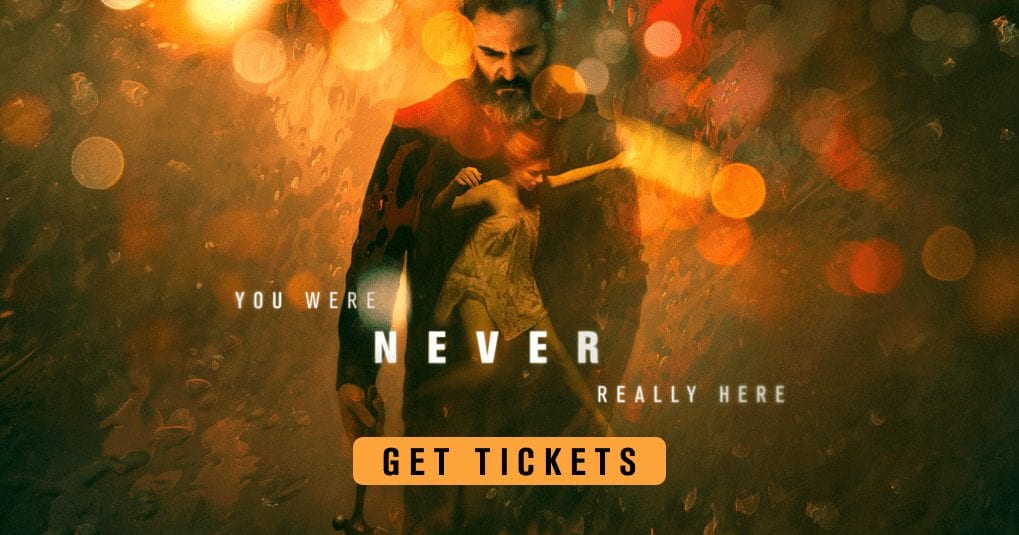 If you thought We Need To Talk About Kevin (2011) was a dark undertaking, Lynne Ramsay‘s latest feature, You Were Never Really Here, socks you in the nether regions — searing a painful brand of, ‘oh, you haven’t seen anything yet.’ The following review will be spoiler free.

A dangerously disturbed and barely hinged veteran who has done and seen things that the average person couldn’t dream about, Joe (Phoenix) is clearly a neurotically suffering man.

Scrupulously operating in an underworld involving the violent infiltration of missing girls, he does not take pleasure in this vice. But for such a perturbing “occupation,” he is strangely suited and capable.

Accepting a certain job that goes awry, he not only learns more about this unfolding situation, but also assimilates his true flaws, responsibilities and his place in the world.

Based closely on Jonathan Ames’ book, You Were Never Really Here is — once again from Ramsay — a laser focused adaptation. The film was showcased at the 70th Cannes Film Festival.

Picking up several awards of an impressively high standard, it took home best screenplay and Phoenix won best actor. Even though this was actually an unfinished version of the theatrical one we can go see in the U.S. on April 6th, StudioCanal picked up the intense thriller and released it in the UK on March 9th. Currently in selected cinemas only, Amazon Studios will helm its U.S. debut in the coming weeks.

With an estimated budget just short of three million dollars, it’s relatively a smaller creative endeavor. But as the ball kept rolling, buzz surrounding the project has led us here: a much mooted film. 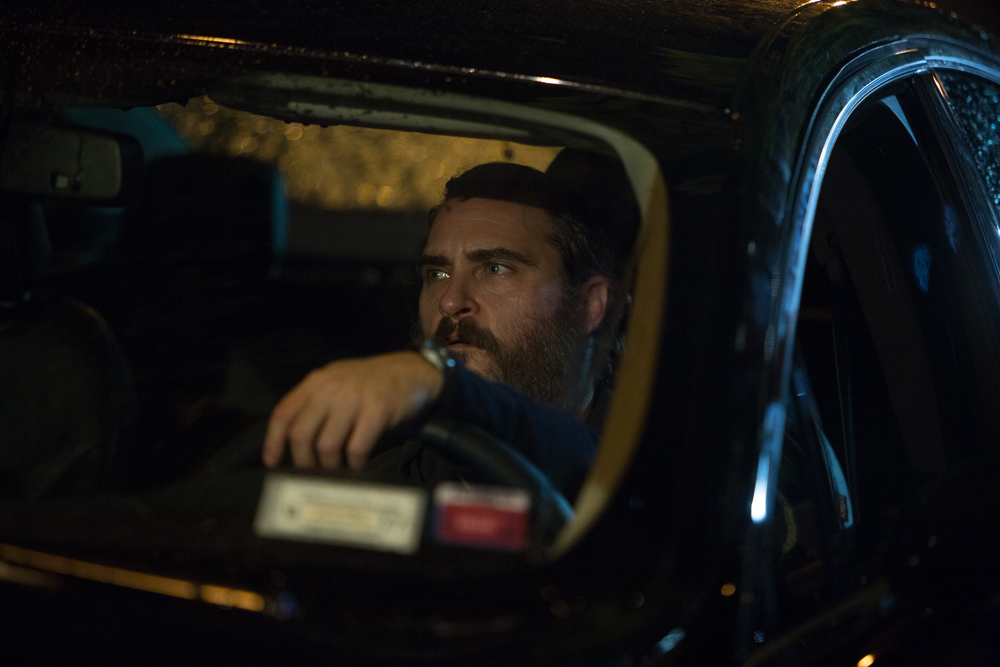 Having an actor of extremely high-caliber embodying a troubled character comes in the flawless form of Phoenix here. It’s astounding how talented and seasoned he is. He fully commits to this role with ferocious rage, malice and agony.

From his earlier parts in Gladiator as the deplorably villainous Commodus, to the eccentric drug fiend from Inherent Vice, he has always shown us his technical brilliance and diversity. And even though his performance in The Master was impulsive and unpredictable as an animalistic nut, up until this film, we’ve never seen him portray a dismaying and unsettling character quite like this.

He also seems to have gained a noticeable amount of weight to correspond with this brutal hired-gun. Sporting a ragged, graying beard and long hair, he isn’t all that recognizable at arm’s length. The torture is encapsulated very successfully with Joe. Word on the street is that this is the modern generation’s Taxi Driver and there are some stark similarities for sure. It follows the difficult and surreptitious state of affairs of Joe. The film does a splendid job at refraining and hinting towards problematic or influencing elements to his past. Joe is the protagonist that does unspeakably reprehensible tasks that involve an array of vicious methods inflicted on other people. The film Nightcrawler springs to mind also when analyzing the structure to You Were Never Really Here.

However, he is undeniably the anti-hero in this picture as his moral compass is a tad bit skewed in places. But this is subtly highlighted in moments of reflective dialogue or flashbacks shining light on his history. There is one recurring motif in the film that everything seems almost backwards for Joe and his inability to reside within the conformity of every day life becomes even more warped by post traumatic stress. He also takes care of his elderly mother and does some good deeds; his virtuous side is unquestionably there but ambiguously so. He is an interesting, stoic, three-dimensional character that requires the viewer to pay attention and to dig deep for themselves in an effort of excavating information.

It’s not exactly the most unique or original foundation for which a tense thriller is built around, but it is just executed in such a satisfyingly snazzy effort. It’s an even concoction of nifty, sophisticated filmmaking and grittiness all zoned in on one complicated man.

The Extreme Violence Compliments How Engaging The Narrative Becomes

The film is unapologetically violent. Many times audience members winced and groaned in their seats at shockingly graphic imagery. The faint-hearted wouldn’t be having much fun here. Ramsay does a masterful job at stylishly hitting the viewer with ultra-realistic provocation.

It isn’t what you’d conventionally call an ‘enjoyable’ watch but purely a harrowing one that really mutilates the senses. The horrific and gruesome scenes are not negatively inundating however. There are some ‘filling in the blanks yourself’ type insinuations — albeit using mind-boggling sound effects.

It almost lends a trifle of itself to that of the horror genre. It effectively implements these truly unsuspecting jump scares and its ongoing tension bolsters these crude segments. At one point, even the discharge of a bullet from a silenced pistol made the theater recoil in horror. Its sound design really assaults the viewer with its contrasting use of utter silence and mega bangs.

Due to its short run-time of 90 minutes, one might worry that it rushes itself and attempts to cram so much into the piece. That is not the case. It is expertly paced with patience. Child trafficking, pedophilia and abuse are all facets to the film and it’s not just the violence that makes it repetitively hard to stomach while enduring it.

One aspect to the authenticity of the film are segments that utilize security camera footage. Rudimentary, black and white footage makes it feel like a found footage film in parts. The visceral brutality can be put somewhat in the background/foreground of the camera in these instances (but not all. God, not all).

The lighting in some shots can be beautifully mesmerizing, accompanied with a hauntingly sparse soundtrack that can create a malignant atmosphere or a slow crescendo of breathtaking beauty. Composed by Jonny Greenwood, who also worked on aforementioned titles such as The Master and Inherent Vice, throws his attentive ear to the project.

In particular, there is one scene that takes place at a lake on a sunny day and everything from the visuals to the bittersweet score is overwhelmingly ravishing and emotional. On all levels of composition, you know you’re dealing with a piece of finely tuned art. Some scenes are cleverly done in such a metaphysical and surreal way that it sparks incredulous reactions. 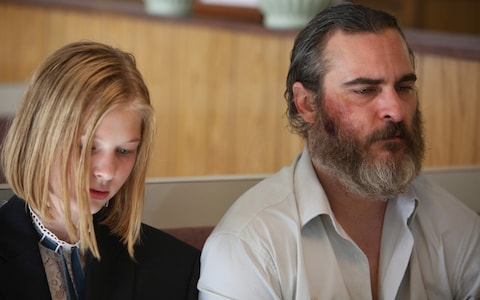 You Were Never Really Here is a meager feature-length film that showcases Lynne Ramsay’s poise and legitimacy as a rousing director. It has quite a moving quality that leaves you shook up by the end and forces you to question just how nihilistically malevolent people can be in a world that is hard to believe exists — but it does.

My only gripe would be that it’s simply too short — which is a rare criticism on the contrary. Paradoxically, this can be construed as a commendable praise as it’s conducive to the fact that what the film achieves is brilliance. Just not elongated enough which may leave certain viewers with somewhat of an unfulfilled void.

This is arguably Lynne Ramsay’s best work yet. Parallel to Joaquin Phoenix’s absolute tour de force of a portrayal, this needs to be watched.

Thanks for reading!  What are your thoughts on You Were Never Really Here?  Comment down below!

My personal favourite film of last year just topping Loveless. I still catch myself thinking about It now.