Ridley Scott has directed a handful of game-changing films in his time in Hollywood, but Gladiator did what few films have done in history: become a critical and cultural touchstone.  Much has changed since the film came out in 2000, but many still agree that it is a damn good film.  The following review will be spoiler free. 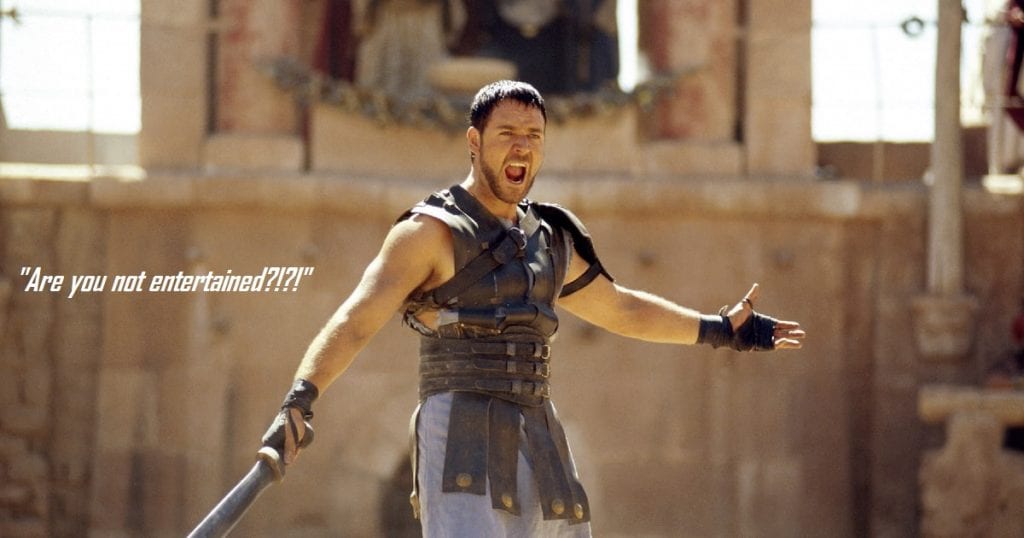 During the times of Romans, Marcus Aurelius dies, leaving the empire to his son, Commodus (Phoenix).  As Commodus ascends to the throne, the Roman army’s most trusted general, Maximus (Crowe), is set to be executed.  Although Maximus escapes his demise, he is captured by slave traders and is forced to battle to the death with other men for the amusement of members of the aristocracy.

As he ascends the ranks as a fighter, Maximus looks to avenge the killing of his family and his loss of freedom, making Commodus even more weary of his presence.

The term, “they just don’t make them like they used to,” is a phrase that gets thrown around Hollywood quite often these days.  For once, that phrase is actually extremely accurate in Gladiator‘s case.

Gladiator is the rare prestige film to be released in the middle of the summer blockbuster season.  Back in 2000, the film was released the first weekend in May, a weekend that is now property of the newest release from Marvel Studios.  The film also cost $100 million to make, a number that would be rarely thrown around for a non-established property these days.  In age where our wild dreams come to life on screen, this movie defines risk from a marketing and financial perspective.

Every so often, a film similar to this one does well in the summer (this year’s Dunkirk is a solid example), but those are merely exceptions to the rule.

If there’s any chance that a film like Gladiator would be made today, the studio would definitely have a lot to say about that 171-minute running time. Under different leadership, that 171-minute would be a serious problem.  However, Russell Crowe continued his impressive run as a leading back in 2000 with an absolutely magnetic performance.  It’s easy to say a movie wouldn’t work without a compelling lead actor, but that notion could not be more true in this case.  An epic tale of redemption and revenge requires that you are 100% behind the main character.  If not, all stakes that the film contains will wither away.

Russell Crowe‘s turn as Maximus is the rare role that requires precise dramatic chops and serious physical tasks.  Even when he’s not slicing his way through men in the ring, you can see the pain in his eyes as he deliver perfect monologues and one-liners.

Maximus strong yet vulnerable.  He’s eloquent and brutish.  He’s even vengeful and kind.  Crowe is every tandem of opposite describers of which you can think.  Every bit of dialogue spouted from his mouth holds an unbelievable amount of weight, sending chills down your spine.

image via Movie Quotes and More

The Perfect Blend Between Elegance and Cruelty

That $100 million dollar budget was well spent, because Ridley Scott created an unbelievably rich world for Maximus to operate.  Scott has always had the uncanny ability to create fully realized worlds with his background as an art director in commercials, but Gladiator marks a distinct departure from his usual work.

As with films like Alien or Blade Runner, Scott has an obvious skill in depicting dark, grisly images.  But, Gladiator is filled with bright, sun-soaked visuals that light up the entire screen.  Working in such light requires expert skill as substandard visual effects would have nowhere to hide.  Scott combats this issue by sticking to practical effects wherever possible, meaning that elaborate sets and coliseums were built for the film.

Building these immaculate sets certainly adds to the realism of the film.  That fact is very obvious.  But combined with the barbaric acts of the gladiators, there’s a surprisingly authentic feel to this illustration of the Roman Empire.  There aren’t many swords and sandals movies that work, and this solid attention to detail certainly sets Gladiator apart from the usual fare.

No revenge-ish film is complete without a great villain at its core, and Joaquin Phoenix is one of the best there is.  Some villains are intimidating.  Others are intelligent.  Then there’s the lot that are downright despicable.  Commodus fits squarely within that distinction.  In essence, Commodus stands for the odds that Maximus must overcome.  He’s not fair.  Hell, he’s not even strong.  He’s literally the worst type of person.  There isn’t a single redeeming quality about him, and that’s why he’s so great.

Joaquin Phoenix has never been one to phone in a performance, and he certainly doesn’t do that here.  Every word he says is filled with an unfathomable amount of hate.  At some moments, you wonder whether or not he’ll start to foam at the mouth.  Phoenix’s dedication to his craft is pretty amazing.  If only it were for a character that you could like somewhat…

To put it bluntly, you just want to punch Joaquin Phoenix right in face.  Repeatedly.

Gladiator is purely an amazing cinematic achievement.  Ridley Scott utilizes his best skills as a visual storyteller combined with an impeccably thorough script that brings every piece of the film to life.  It not only boasts great performances, but it also elicits a true emotional response that has remained ever resonant since 2000.  Gladiator may be tough to rewatch for some considering its nearly three hour run time, but there’s no denying its brilliance.  Clearly, Gladiator deserves an A+.

In recent years, Ridley Scott has actually discussed directing a sequel to the film.  Ridley, we all appreciate you and your groundbreaking films, but leave Gladiator alone.  We don’t need you to ruin another one of your prestigious films (looking at you, Alien: Covenant).

Thanks for reading!  What are your thoughts on Gladiator?  Comment down below!

Don’t forget about the amazing soundtrack. Thrilling one minute, reverant sacred and ethereal the next, just listening to this film is an experience

Absolutely! Who could forget!

Definitely up there with some of the great movies in filmmaking history. The story was solid, the movie was beautiful and well-crafted, the acting was superb, and the ending is definitely memorable. Love this movie!!!

When the movie came out, I didn’t expect to like it–gladiators?!–but once I started watching it, I was hooked. Well- deserving of your A+!

There hasn’t been as good of a swords and sandals movie since!

This film is one of the classics in my book! I completely agree it deserves an A+ rating.

This was one of Ridley Scott’s best films. I remember leaving the theatre in awe when I saw this movie. It was simply amazing. Everything in this film was perfect, the acting, music, the sets. Honestly a completely perfect film for me. Great post! ?

I could watch this movie over and over and still never tire of it. Whole heatedly agree with this review.

Glad to know that I have your approval!

HERE! HERE!! They DON’T make them like this anymore!! Sadly why I watch more foreign movies than US made! Joaquin was sensational of Commodus! And Russel Crowe? Commanded the screen!!

I would love more than anything to see more $100 milllion movies like this one, I just don’t think that’s very feasible these days considering the market for film.

Yeah, Gladiator is a perfect piece of movie! But it definitely doesn’t need any sequels, thank you very much.

You are very welcome!

Your assessment of the Commodus character is spot on. I hated him so much I thought I’d never be able to see Joaquin Phoenix in another movie without having flashbacks to this character. Fortunately, he’s a great actor. Loved him subsequently in “Signs” and “Walk the Line,” among others. Whew.

Phoenix is definitely a”method actor,” always losing himself in the role. Luckily he doesn’t send his co-stars used condoms like Jared Leto lol