There’s no doubting that many skew towards hard-hitting, dramatic features when bestowing a film with the label of “great.”  Honestly, I can’t say I blame people for doing so; there’s a sense of raw power that is lacking from certain “lighter” films.  One could say that the bias towards comedic movies from the Academy stems from this perception.  And yet, every so often there’s a movie that comes around that fills every single person that watches it with joy, becoming a fantastic palate cleanser from the countless stories that detail dour, troubled characters.  Sgt. Stubby: An American Hero is precisely that movie, and I’m still smiling as I think about it.

Upon preparation for the Great War, platoons all over the United States begin their intense training in preparation for harsh battle.  However, one soldier — Robert Conroy (Lerman) — can’t seem to shake a stray dog that keeps following him around.

Once war begins, Stubby proves quite helpful in the field as well, saving his regiment from a surprise mustard gas attack in combination with many other feats.  By the end of the war, Stubby becomes the most decorated war dog of World War I.

The story of Sgt. Stubby is almost unimaginable — and worthy of a motion picture.

Stubby is described as a dog of uncertain breed though he probably takes after a Bull or Boston Terrier.  Initially a stray, Stubby was found wandering the grounds near the Yale University campus while members of the 102nd Infantry were training.  Robert Conroy immediately took to the dog he later named Stubby, hiding him from his superiors once he embarked for war.  Funny enough, Conroy’s commanding officer discovered Stubby, the dog immediately saluted!  That gesture of patriotism did its job, and Stubby joined the 102nd Infantry in the war to help in any way he could.

Today, the Smithsonian “The Price of Freedom” exhibition recognizes Stubby for his efforts. 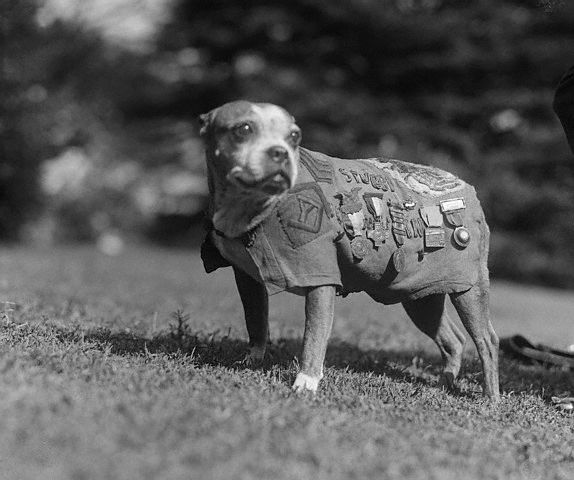 A Beautiful Story that is as Touching as it is Harrowing

If you’ve been following my analyses for any period time, you’d know that I like to stick to a deeply analytical look at films.

That said, Sgt. Stubby is amazingly, unbelievably, astoundingly, miraculously, marvelously, and astonishingly cute — in combination with any other appropriate adverb you could add to that list.  With a score that gets under your skin a heartwarming manner, Sgt. Stubby touches on all the uplifting chords that films try to hit but mostly fail in doing.

Movies by design are manipulation machines, hopefully striking the right chords to create the intended feeling within the audience.  Sgt. Stubby: An American Hero operates within territory that normally becomes saccharine under less than stellar direction.  But, with strong relationships between humans and one amazing dog, the film captures a feeling of tenderness that is often lost in cinema today — and it’s all warranted within the story.

Although the film moves along with narration by Helena Bonham Carter, the film shows a lot of sequences through the eyes of Stubby himself.  This touch blends an amazing amount of charm with legitimate stakes, creating a form of audience investment that is practically unparalleled except for a few other films.  Sgt. Stubby won’t wow you with its animation, but its themes and beautiful relationships do more to create a magical experience that tugs on all the heartstrings in the proper manner.

Sgt. Stubby Captures the Horrors of War Without Ever Showing a Single Drop of Blood

You’ve seen countless horrific, intensely bloody war epics over the years, but Sgt. Stubby: An American Hero tackles war from a much different perspective.  The film has a PG rating — meaning no bullet holes and blood.  Still, the film presents war as it should: as a terrible situation. It may present itself with a certain childlike wonder with a lovable dog added to the mix, but there’s still an awful side to war that is always palpable here.

Sgt. Stubby includes details such as mustard gas and trench warfare, blending them with questions of why soldiers continued to fight after a surrender was established.  The film even tackles the facelessness of war in tandem with a lovely image of many different nationalities coming together for a worthy cause. Stubby isn’t your typical animated film; hardly any animated features try to tackle such mature themes through a lens that is accessible to younger audiences.

Through a few whimpers from a dog, you get all the information you need to understand the terrible nature of WWI.  Let’s be honest, we all care about a cute, cuddly dog, and seeing one in the line of fire is one of the more riveting things you’ll see in 2018.

Admittedly, Sgt. Stubby is somewhat lacking in content — even with a runtime that doesn’t reach 90 minutes.  Although we live in a time where movies are unnecessarily long, it’s clear that this particular film is using tricks to pad its length in a manner that isn’t fully meaningful.

It’s a little unsure of itself, moving from scene to scene with moderately aimless narration that stitches moments together.  In some instances, one could feasibly remove scenes without any problems.  Characters are forced to carry out side antics that are essentially inconsequential, and that lessens the power of Sgt. Stubby‘s themes.

But who am I kidding, that dog is so sweet!

image via The Veterans Site Blog

Sgt. Stubby: An American Hero is one of the few films that exudes pure charm and hope.  Not only is it absolutely adorable to see a dog become a valued member of a platoon, but it’s even better to see what he can inspire in those around him.

This animated film sometimes struggles in finding fascinating material to fill out a feature, but there’s no denying its resonant charm and positive outlook on the world…or at least the beauty in one lovable dog.  Richard Lanni accomplishes what might be one of the harder directing tasks of 2018 by adding a nuanced discussion of war without ever showing a wound or a drop of blood, creating a war movie unlike any other.

Thanks for reading! What are your thoughts on Sgt. Stubby: An American Hero? Comment down below!

This completely flew under my radar. When I first saw a screencap of it, I thought it was just another cheap kiddie film made overseas destined for the direct to video bin. I may have to give it a watch now.

It’s soooooo great! I really, really loved it! It’s not the best animation you’ve ever seen, but it’s definitely worth a watch! 😁

Good review. I might have to check this out before it gets pulled out of theaters.