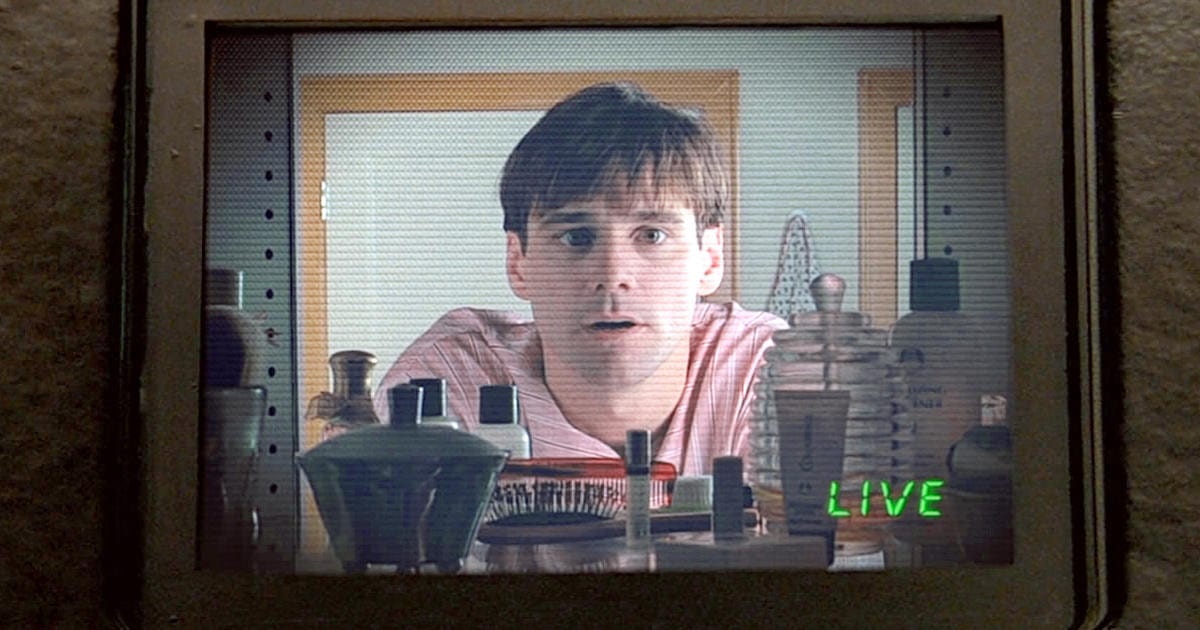 I had a bit of a moment this week when I saw that The Truman Show (1998) is turning 20. In your 40s, a song or a movie you thought was 10 years old turns 30 almost every single day, or you even realize your teenage children have never known a time without internet. But, in this case, it’s not that The Truman Show was released so long ago — it’s remembering how I felt when I first saw it.

The Truman Show was Jim Carrey’s first major dramatic role. He plays Truman Burbank; the unwitting star of a 24 hour live TV show. The film joins him as he learns he’s has been living for 30 years in a gigantic sound stage, his every move broadcast worldwide. When a series of very odd things happen, he begins to realize that something’s not right. A Window Into the Future

I went to see the film for the first time in London.  I walked in to the theater knowing very little about it other than it starred Jim Carrey. Carrey’s most recent projects were The Cable Guy (1996) and Liar Liar (1997) so I expected something very different from what I got, and walked out feeling distinctly uneasy. The invasion of privacy and Truman’s realization that nothing about his life was real made the hairs stand up on my neck.  What stands out 20 years later is how that scenario seems almost unremarkable.

As reality TV exploded into a phenomenon within a few years of The Truman Show‘s release, the film took on an almost prophetic status. The big brother scenario threw up fodder for media ethics classes everywhere and gave us all a brief paranoid pause for thought when we glanced in the bathroom mirror. But, in this era of alternative facts and disturbing privacy revelations, what happens to Truman doesn’t have the shock factor it had back then. This time, I watched with the gloomy recognition that while we don’t all live in a massive TV set  — we do share with Truman the daily struggle to try to decipher what is real.

Having said that, The Truman Show is not a gloomy movie.  My kids had never seen it and were happy to indulge my Sunday afternoon research viewing (complete with shushing and pausing) and they loved it. Truman is a character you can get behind.  He’s enthusiastic and optimistic and, once he works out what’s happening, he is the ultimate underdog. There are plenty of themes and metaphors to think over afterwards but it’s also just a good yarn in the moment.

There were three things that really stuck out when I took another look at this award-winning and critically acclaimed film:

Jim Carrey dialed back his usually full-bore persona considerably to play this part, and it really works.  There are none of the familiar facial contortions, leaving behind the funny and touching performance that earned him a Golden Globe for Best Actor. Of course, how much it’s downplayed is all relative.  It’s still a pretty out-there portrayal by other actors standards, but for Carrey, it’s positively sedate.

Originally, the role of Christof, the show’s creator, was given to Dennis Hopper, but he walked off the movie after two months. Ed Harris was then cast and went on to win the Oscar for Best Supporting Actor for his portrayal. Christof is a character we want to dislike. He is characterized as a self-imagined God figure with artistic affectations. It’s a master stroke then that Harris, through his performance, is able to let us in on the tenderness he feels for Truman and his own vulnerability as he loses control.

Laura Linney’s character is the actress who plays Truman’s wife Meryl.  This set up is the most morally questionable and members of the show’s audience wonder on our behalf what happens when the lights go out (the screen fades to black FYI). Most of the responsibility for keeping Truman in the right place at the right time rests with Meryl.  The beauty in Linney’s performance comes from when things start to spiral out of control.  As Truman starts to ask questions and eventually tries to escape, the strain begins to break her.  Her gritted teeth product placements and eventual outburst make this a great performance.

Something I don’t remember noticing the first time around was the distinctive soundtrack. The Director, Peter Weir, commissioned Burkhard Dallwitz and Peter Glass to compose the music and the result won them the Golden Globe for Best Original Score. Glass appears in a cameo as an on-set musician for the TV show, playing live to accompany Truman’s movements. The piano piece Truman Sleeping, which plays at a particularly poignant moment between Christof and Truman, is a highlight.

It’s definitely one of those movies that reveals layers of quirky detail the more you watch, some of the things that stood out were:

Niccol said that originally the screenplay was a lot darker with a much less hopeful ending — for me, at that time, the movie was just dark enough.  The story goes that Weir floated the idea of switching off the reel during screenings and cutting to a shot of the cinema audience watching.  I’m so glad he didn’t do that, it might have tipped me over the edge!

Twenty years down the track The Truman Show is still highly watchable and definitely thought-provoking, though perhaps for different reasons than back in 1998.

Thanks for reading! What are your thoughts on The Truman Show 20 years later? Comment down below!

This is an excellent movie, and now I want to go and watch it again.

I’ll have to watch it again!

Yes, it’s definitely worth another look :)

I love this movie so much.

Great article! This film was so well made, and it really holds up. Twenty years feels nearly impossible.

Side note: I’m so glad there’s someone else on the staff in my age group. I thought I was the only one past my 20s. ;)

Thanks Patricia! You’re not alone – without us who would write about all these films from the olden days?