Method acting is a fascinating part of the film industry.  Actors and actresses are lauded for losing themselves in characters, becoming those people.  But, sometimes the pursuit of a spot-on performance can stir up many issues on set, and for the individual as well.  Jim Carrey became Andy Kaufman in Man on the Moon in 1999.  But, he soon forgot how to be Jim as described in Jim & Andy: The Great Beyond.  The following review will be spoiler free. 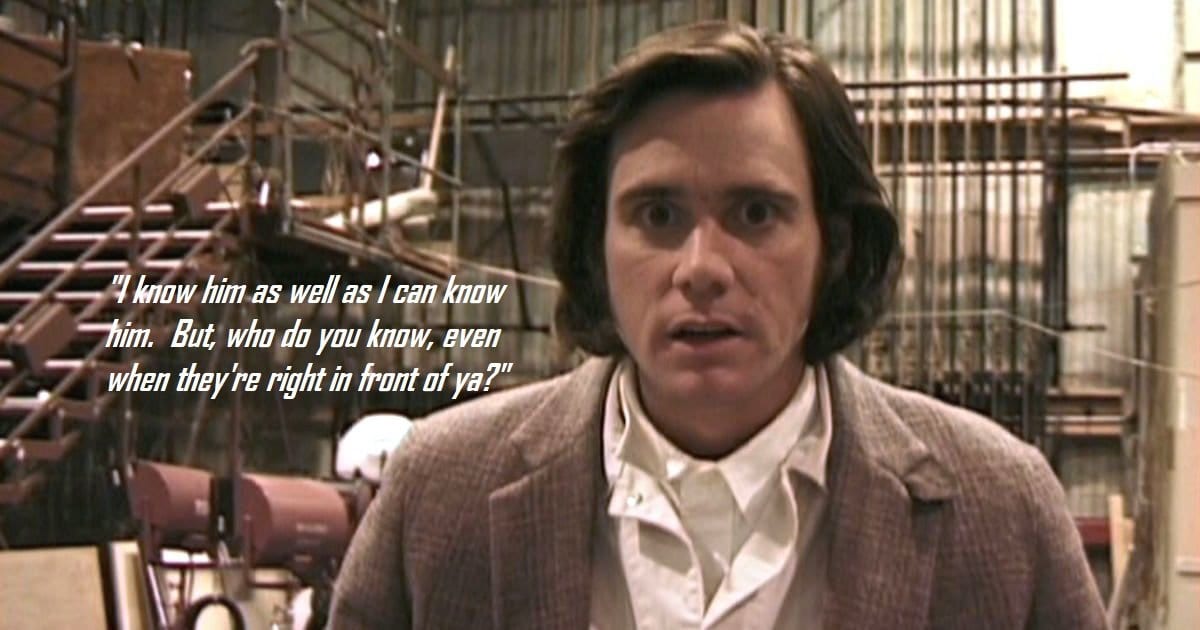 In 1999, Jim Carrey earned the opportunity to play his idol Andy Kaufman in Man on the Moon.  The behind-the-scenes footage of his work in the film was held back by Universal Studios in fear…until now.  During Jim & Andy, we see what great lengths Carrey took to arrive at his eerily spot-on performance of the late comedian, even if it meant being ridiculed by the rest of the cast and crew.  However, we also learn how taxing method-acting can become.  While looking back at one of his best performances, Carrey ponders identity, reality, and life as a whole.

Man on the Moon has become somewhat of a cult classic since its release back in 1999.  The film was originally a flop, earning only $47.4 million on a $82 million budget.  However, some outlets, most notably Entertainment Weekly, praise the film as the best movie of the year.  Ultimately, critics were a tad split on the film, but everyone praised Jim Carrey for his turn as Andy Kaufman.  He went on to win a Golden Globe for his performance in the much maligned “comedy/musical” category.

The film itself tried its best to stay true to the life of Andy Kaufman, showing all his best and most memorable antics on late night television and his personal life.  Some became a little annoyed with which events the film chose to depict, but many maintain the film’s accuracy, or merely a version of the events that probably would have made Kaufman happy.

Jim Carrey is Andy Kaufman.  He didn’t just act as the famous comedian, he became him.  The behind-the-scenes footage shows “Andy” in a completely unhinged state.  Carrey embodied Kaufman, taking over his mannerisms, actions, and even his disputes.  He was in a different state of being (his words, not mine).  It’s alluring to see a person act in such a deranged manner, as if they are on a different plain of existence.  It’s also pretty hilarious.  Let’s be honest, watching Jim Carrey lose it is second to none.

To put in bluntly, Carrey made the filming of Man on the Moon a living hell for almost everyone involved.  Andy Kaufman’s persona, Tony Clifton, would appear and wreak havoc, throwing drinks, running after women, and even harrass the offices of Steven Spielberg (no, seriously).  Kaufman would also come out and cause some problems.  When asked why he did such things, Carrey exclaimed that everything was out of his control.  Andy took over, leaving Carrey nowhere to be seen.

Everyone, including director Milos Forman, was totally and completely annoyed by Carrey.  But, like your viewing experience of the documentary, there was something fascinating that drew everyone to him.  There was a strange dynamic while filming.  Judd Hirsch and Danny DeVito would exclaim how infuriated they were.  But, the next second, they’d love every bit of it. However, all that entertainment came at a price for Carrey.  The documentary delves into Carrey himself, paralleling his life with Kaufman’s.  We begin to understand what made Carrey the comedian he became.  We learn why he became the man of many faces, curtailing his style to what audiences would like best.  The life of the comedian is tough.  As Carrey explains, you either become the character to you created and kill your true self, or you lose what made you so beloved.  I go back to the same description, but this struggle is fascinating.  What do you do?  Stay true to yourself or become beloved?

Andy Kaufman took something away from Carrey, causing Carrey to struggle with his identity after the end of filming.  Picking up the pieces of his life was incredibly challenging.  There’s no doubt that this role permanently changed Carrey.

In Essence, Jim & Andy is the Demise of Jim Carrey Himself

Jim Carrey has undergone a personality change in recent years.  Many were curious as to what exactly happened, but, as Carrey explains in Jim & Andy, he’s now at peace.

All of his roles reflected some aspect of his life.  He felt broken during Eternal Sunshine of the Spotless Mind.  He felt alone during The Truman Show.  But as for Man on the Moon, he was confused.  Unclear of his own path, Carrey made his own.  Now, his take on the universe and being is always evolving.  He might seem like a crazy person to you, but his reality makes sense to him.  During his time as Andy Kaufman, nothing really made sense.  Although it widely differs from the typical train of thought, it’s what makes Jim happy these days.

Ultimately, Jim & Andy may be seen as a downer to some, considering Andy Kaufman somewhat broke Jim Carrey in the end.  However, this documentary is still as fascinating as anything you’ll see in theaters this year.  Netflix continues to put out great content at an alarming rate, and Jim & Andy is one of the better documentaries of recent times.  It gets an A-.

Jim & Andy is an incredibly fascinating look into the perils of becoming lost in a character.  You may be praised for your great work.  But, you might just lose yourself in the process. Thanks for reading!  What are your thoughts on Jim & Andy?  Comment down below!

[…] to say this film’s sole focus was race. The 40-Year-Old Version is really a film about artistic integrity. Blank postulates that the real issue in art communities is not White people (though they really […]

hey, just saw so many great work on your site, I need to learn from you,

Glad you enjoy it! All it is is good ol’ fashion hard work

I watched this last week. I’m a huge Carrey fan (his hometown is next to mine), and I was a bit concerned by his behaviour in recent public appearances. Jim & Andy explained a lot. Difficult to watch at times, but a deeply poignant and fascinating documentary. Your post captures the details perfectly. Well done!

Thanks so much! I was in the same boat as you. I didn’t know what to think about Carrey with his bizarre behavior. Jim & Andy certainly doesn’t make up for it, but it casts those actions in a different light for sure. He’s at peace, so maybe we should be too!

My pleasure Nick! Comic geniuses certainly have their demons at times. Cheers!

I watched the movie as soon as I read your reviiew. Fascinating!

Wow! That may be the quickest recommendation I’ve ever pulled off ?. I hope you enjoyed it!

‘The Silence of the Marsh’: When Atmosphere Takes...