MoviePass might be paying for American Animals twice in some cases as it pays for tickets AND distribution costs, but that doesn’t change the fact that Bart Layton’s creation is one of the more unique tales of 2018.  Splicing together narrative storytelling and documentary-style interviews, American Animals is much more than your typical heist film.

Spencer (Keoghan) is a college student that lacks direction.  He feels somewhat stagnant in his life, and wants more from it.

After taking a tour of his college library where he learns that it holds many old, priceless books, his friend Warren (Peters) and he wonder: could they actually pull off a heist and steal those books?

With plenty of free time, the two meticulously plan out their hypothetical heist, continuing to dive further down the rabbit hole with no one telling them to stop.  As they bring other acquaintances Eric (Abrahamson) and Chas (Jenner) onto the project, they slowly come to the realization that this heist is very possible…and they can do it if they truly put their minds to it.

American Animals is a fascinating movie for a number of reasons.  It’s a true story after all.  There’s also one particular storytelling device that makes it quite original (more on that below), but there’s one element that sets this movie apart from others in terms of its distribution: MoviePass.

That’s right, the subscription service that is slowly going out of business has its tentacles wrapped around this indie flick.  It partnered with The Orchard back at Sundance to purchase the distribution rights to the film, expanding its business possibilities with its new development arm MoviePass Ventures.

Good for MoviePass for trying to expand their business possibilities!  There’s just one problem in all of this: MoviePass might be headed towards bankruptcy.  The stock price of their parent company Helios and Matheson is below $1 amid concerns of MoviePass’ financial standing.  They’re running through cash like crazy, and they don’t have the investors to continue to run through money like other companies sometimes do before they come profitable (Spotify comes to mind as a good example).  How American Animals performs at the box office may have a hand in deciding MoviePass’ fate into the future.  If it performs well enough, you might be able to take advantage of that too-good-to be true deal that the company offers for just a little while longer.  If it tanks, well, you might have to figure out other options for keeping theater costs down. On the surface, you might think something like “another movie with a group of eccentric twenty-somethings trying to pull off heist?  I’ve seen this so many times before!”

Bart Layton’s previous work was mostly with documentaries.  American Animals feels like an extension of that as he used documentary-style interviews from the real people who performed this heist, splicing it together with the narrative pieces of the film.  The easy thing to do here would be for the real people to explain a scene then have the actors quickly act it out for the audience.  But when you think about it, that would have been super repetitive.  Instead, Layton uses the real life figures involved in this heist to expand upon the actors playing them, to add character depth where their wouldn’t have been any otherwise.  It’s such an effective use of time and space that adds plenty of color to each scene.

Even better, American Animals plays hard into the idea of the unreliable narrator.  The heist was such a wild experience for the real figures that they misremember how things played out and contradict each other time and time again.  Bart Layton embraces this aspect of their dynamic together and creates visual contradictions within the narrative that mirror what each individual thought happened — what a wonderful display of filmmaking!

Everyone Needs to Pay Attention to Evan Peters

You know him as Quicksilver, but Evan Peters is one of the more talented young actors in Hollywood today.  He takes on interesting characters and makes them larger than life.  He’s easily the most fascinating character in American Animals.  Honestly, you should probably go see this movie just to watch him.

He’s the too-cool-for-school character you’ve seen before.  His hair falls in front of his eyes; he has an incredible talent that he wastes out of some spiteful feeling inside of him; he even has a troubled home life that sends him further into the realm of the disorderly.  The piece of him that I found so fascinating is his unbridled sense of entitlement that manifests in a bizarre desire for individual improvement, both personally and of others in the group.

This heist was a once in a lifetime opportunity, and Peters believes that everyone involved will be better for it.  They deserve the money that comes with the heist.  It’s like the underpants gnome logic from an earlier episode of South Park (collect underpants — question mark — profits!).  Something doesn’t quite add up in his thought process which works perfectly as a tragic flaw. 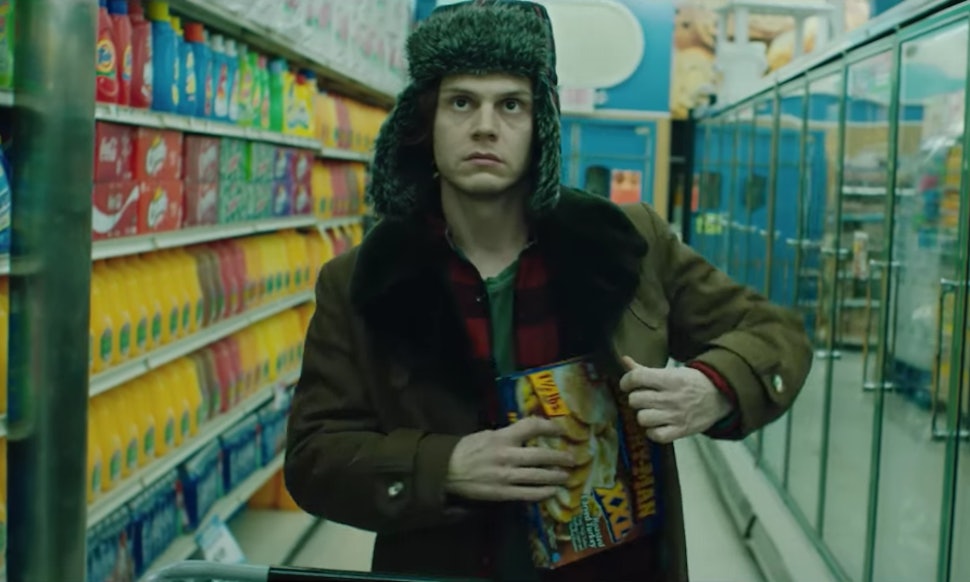 A Lot Can Come from the Desire for More

These college students have skills, but you won’t see them act sly like someone out of an Ocean’s movie.  In fact, the driving force in their pursuit of these rare art books comes from one thing: boredom.  It’s their fantasy that no one told them to stop following.  They even give each other code names a la Reservoir Dogs after watching copious amounts of heist movies in preparation for their own mission.  In other words, they really needed another hobby.

Admittedly, American Animals feels a little ham-fisted in its attempt to add thematic depth to this story, but it creates such an amazing sense of pandemonium as the young men quickly realize that they are in over their heads.  American Animals has its fun, but it truly succeeds in expressing its grit.  It’s a cliché to say, but you can cut the tension with a knife.  Handheld camera movements become nauseating, the characters feel it too.  American Animals continues to push and push as things become more hectic, highlighting the fear that comes with running such a daring robbery.

American Animals is one of the more uniquely constructed films of 2018.  It’s not the first film to add in documentary interviews to a narrative film, but it does so in such a strong manner, adding depth to the characters within the narrative section of the film that might not have been there without it.  It could have gone off the rails in so many areas, but it remains tight with confident direction from Bart Layton — allowing the film to go off the rails in all the correct ways as this story gets more pulsating and wacky by the minute.

Go see this movie and use your MoviePass card to make them pay twice for it!

Thanks for reading!  What are your thoughts on American Animals?  Comment down below!

[…] so infrequently utilized and difficult to pull off. (A favorite recent example of mine is American Animals, a film not nearly enough people saw back in 2018.) There’s a lot to admire about The […]

Obviously I highly recommend it! It’s a great time!

I’m almost with you on this one.

I still liked it but it didn’t work as well for me. My review will be up in a few days because of an embargo.

I’ll take a look when it gets up!

This is a film I’m likely going to see in theaters more than once, it was so good!

I don’t blame you! It’s so damn entertaining and clever. It’ll definitely be one of my favorites of the year!