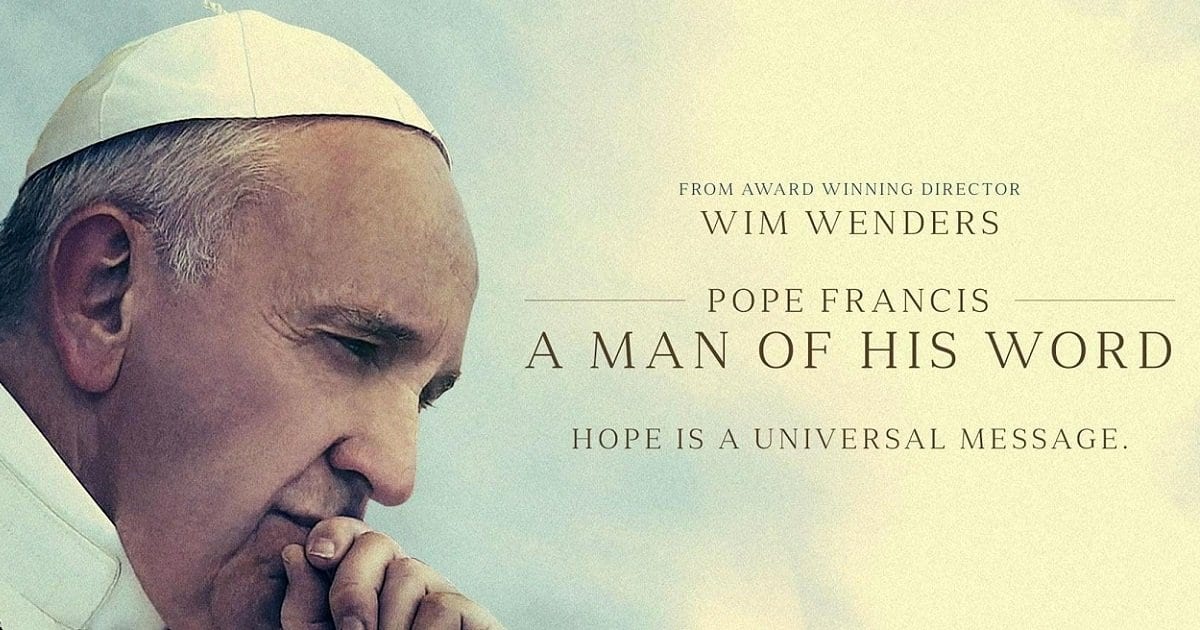 You may not practice his religion (or practice one at all), but Pope Francis is one of the most famous figures in the entire world — if not the most famous figure.  People travel from all over the world to hear his sermons and expand their own faith.  Essentially, he’s a beacon of hope for over a billion people, and it was probably only a matter of time before he got his own documentary.  Enter legendary filmmaker Wim Wenders, whose film Pope Francis: A Man of His Word is already a critical success.

Including: Pope Francis and Wim Wenders

Rather than tell a biographical story of Pope Francis’ upbringing, A Man of His Word focuses on his teachings, intertwining them with some of the world’s most troubling questions.  From his concern for the poor to environmental issues, Pope Francis continues to call for one particular thing: peace.

Sometimes, it takes years for directors to get their projects off the ground.  Some struggle to find funding; others have trouble gaining access to people and locations; other creators never get through the brainstorming stage.  Yet, every so often, there’s a director that has none of these issues when developing a movie.  If you can believe it, Wim Wenders was actually contacted by the Vatican via letter to create and lead a project around Pope Francis — not the other way around.  The nature of the proposal gave Wenders unprecedented access to the pope as well as the Vatican archives.  In the end, he even received final cut privileges for Pope Francis: A Man of His Word.

I guess when you’re a legendary figure in the film industry that’s created such classics as Paris, Texas and Wings of Desire, you probably deserve to do whatever you want.

If you’re familiar with Wim Wenders’ work, you know that he’s a very thoughtful man — almost to a fault.  Even before he made his first film, he was fascinated with big-time themes such as time, love, and loss.  Those interests bleed into all his films, and they even become apparent in his cinematography as well as all of his camera movements.  A Man of His Word combines voice and image in a way that is always affecting.  It has a hypnotic touch to it, locking the viewer into a state of meditation and contemplation as Pope Francis moves from one discussion point to another.

In a vacuum, the content in Pope Francis: A Man of His Word makes for a dry documentary.  But Wenders finds a way to make stock footage and essentially one interview subject a dynamic piece of art.  Honestly, he might be one of the few directors that could have pulled off such a documentary.

Pope Francis Has a Message that Extends Beyond Just Catholicism

I know what you’re thinking: A Man of His Word follows a religious figurehead, and you’re really not interested in watching a faith-based film.

Listen, I get it.  No one wants to become the subject of proselytization when they’re simply looking for a piece of entertainment.  However, Pope Francis: A Man of His Word isn’t that type of film.  In fact, Pope Francis himself chastises those that attempt to force-feed biblical teachings to unwilling individuals during one particular conversation in the film.  For Pope Francis, the troubling issues discussed in the documentary are problems that face all people on Earth regardless of their background or religious preference.

Surely religion is part of the equation (he is the Pope after all) but he expresses his viewpoints with an eye on what’s best for the common man.  His religion merely acts as a framing device that allows you to understand why he has certain beliefs.  Wim Wenders was right to construct A Man of His Word in this manner as it opens up the dialogue created in the film to everyone rather than just the Christian base of moviegoers.

The documentary jumps from one great discussion to another, highlighting what Pope Francis believes is necessary to fix poverty, environmental decay, and even political strife.  It’s just too bad that the narrative device that moves the documentary from one beat to another isn’t very strong.

Pope Francis is the first of 266 popes to take his name from Saint of Francis of Assisi.  A Man of His Word mirrors this fact by showing how the Saint and Pope Francis hold similar causes close to their hearts, accomplishing it through reenactments of Assisi’s actions with actors in vignettes that use less frames per second than films do today.  To put that description in better context, it’s similar to an old silent film from the beginning of the medium such as The Great Train Robbery:

In combination with narration from Wim Wenders himself, these interludes don’t match with the serious nature of the conversations with Pope Francis.  They include overly lofty narration with rather hoaky performances that are engulfed in a sense of self-seriousness despite the images themselves remaining rather cheesy throughout.  With that in mind, Pope Francis: A Man of His Word feels like it’s stitched together without strong connective tissue. Wim Wenders remains as thoughtful as ever as his latest documentary blends his signature visuals with palpable pathos, becoming a worthy watch regardless of your faith or lack thereof.

Many will shy away from this film because of its ties to Catholicism, fearing that they’re in store for a 90-minute lecture on the “proper” religion.  Pope Francis: A Man of His Word is unquestionably a lecture, but not in terms of religion.  Rather, it discusses how people should behave in society, including universal teachings that transcend religious doctrine.  In my opinion, that’s a pretty worthy pursuit for a documentary to tackle.

Thanks for reading! What are your thoughts on Pope Francis: A Man of His Word? Comment down below!

I am not a Catholic, so I do have some hesitations before seeing the film as you mentioned, but since it seems more like a biography than anything else, maybe I’ll give it a shot. I’m not a big documentary guy and the two documentaries I’m waiting to see this year are Won’t You Be My Neighbor and the Robin Williams one.

I’m dying to see Wont You Be My Neighbor! That trailer filled me with so much love and tenderness! Lol